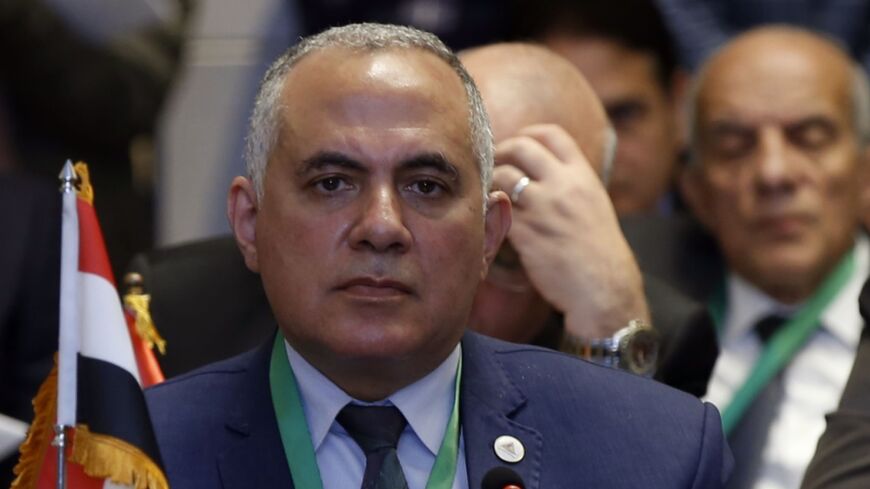 Mohamed Abdel Aty, the minister of water resources and irrigation of Egypt, is seen during a tripartite negotiation meeting between Egypt, Sudan and Ethiopia on the filling and operation of the Great Ethiopian Renaissance Dam project in Addis Ababa, Ethiopia, on Jan. 8, 2020. - Mnasse Wondmu Hailu/Anadolu Agency via Getty Images

CAIRO — Amid the stalled negotiations on Ethiopia’s controversial dam on the Nile River, Egyptian Minister of Irrigation and Water Resources Mohamed Abdel Aty headed to South Sudan for an official visit from June 21-25.

In a statement released June 24, Abdel Aty said he “explored with senior officials in South Sudan the developments on the Nile waters issue and the current stance vis-a-vis the Grand Ethiopian Renaissance Dam negotiations.”

Abdel Aty further stressed “Egypt’s intention to proceed with the negotiations to reach a fair, legal and binding agreement for everyone to meet the development ambitions of all states.” He also noted Egypt’s flexibility in the negotiations on the dam in recent years, as opposed to Ethiopia’s clear intransigence.

Mohamed Hegazy, a former assistant foreign minister, told Al-Monitor, “The visit of the Egyptian minister of irrigation to Juba comes in light of the growing relations between the two countries. Cairo is implementing many development projects in the water resources sector in South Sudan, including a drinking water station, in addition to several other projects in the fields of infrastructure, irrigation, agriculture and energy.”

On June 23, Abdel Aty inaugurated the underground water treatment plant, which was established by Egypt, in South Sudan's Lemon Mountain.

Hegazy said, “The official discussions held by Abdel Aty in Juba reflect the depth of relations between the two countries within the framework of activating the results of the visit made by Egyptian President Abdel Fattah al-Sisi to South Sudan in late 2020.There are very good relations between Cairo and Juba, and the two countries are seeking to strengthen and preserve them.”

Amani al-Taweel, director of the African program at Al-Ahram Center for Political and Strategic Studies, told Al-Monitor over the phone, “Egypt provides South Sudan with development support in a number of projects in the fields of irrigation and agriculture, and this matter was on the agenda of Abdel Aty’s visit to Juba.”

She added, “The visit’s significance also lies in the uninterrupted positive interaction with South Sudan due to its direct geographical borders with Ethiopia. It is important to present the latest developments in the GERD negotiations to the political leadership there [in South Sudan], in light of Cairo's relentless desire to boost its cooperation with the countries of the Nile Basin specifically.” GERD is the abbreviation for Grand Ethiopian Renaissance Dam.

The director of projects in North Africa at the International Crisis Group, Riccardo Fabiani, told Al-Monitor, “Cairo has been trying to mobilize support for its position on the GERD with the Nile Basin countries for years to isolate Addis Ababa from its surroundings, and to exert as much diplomatic pressure as possible on Ethiopia to force it to make concessions [on negotiations].”

But Fabiani said, “Not all [African] countries visited by Egyptian officials automatically support Cairo's position, as many governments prefer to have a more precise position, and do not necessarily want to share their opinion” on the dam issue.

He said, “It is unlikely that this issue will be resolved by the UN Security Council. It is difficult to imagine the United States and Russia taking any firm stance against any of the concerned parties through the Security Council. None of the major powers want to take sides and alienate Egypt or Ethiopia.”

Sudan recently asked the Security Council to hold an emergency meeting and discuss the dispute over the dam. In a June 23 statement, Sudanese Foreign Minister Mariam al-Sadiq al-Mahdi called on the Security Council to urge Ethiopia to stop filling the dam unilaterally, warning that this “exacerbates the conflict and poses a threat to regional and international peace, and threatens the safety of millions of people.”

But Fabiani said, “There is a consensus among the major international powers that the GERD issue needs to be resolved through negotiations, and that the best framework for this is the African Union.”

Ethiopian Foreign Ministry spokesman Dina Mufti said in a June 24 statement that his country “does not see the need to transfer the file of the GERD to the Security Council” and called on Sudan to restrict the negotiations to the African Union.

The office of the African Union presidency held a virtual meeting June 24 to discuss the dam crisis. Ethiopian Prime Minister Abiy Ahmed said in a tweet that the meeting featured an exchange of information on the dam presented by Felix Tshisekedi, who is the president of the Democratic Republic of the Congo and chairman of the African Union.

Ahmed said that it is expected that Tshisekedi will submit a full report on the dam issue to the office of the African Union presidency at the “appropriate time [and] discussion would be deferred to a later date.”

Taweel said Cairo has been exerting pressure by all possible means, both regionally and globally, to pressure Ethiopia into signing a fair and legally binding agreement to fill and operate the dam.

Hegazy said the dam involves “not just the water security of Egypt and Sudan, but the stability of the Horn of Africa and the security of the Red Sea. The international community must assume its responsibilities to stop this threat.”