Amid the stalled negotiations over the Grand Ethiopian Renaissance Dam, Egypt gives priority to winning over Sudan in the dam crisis. 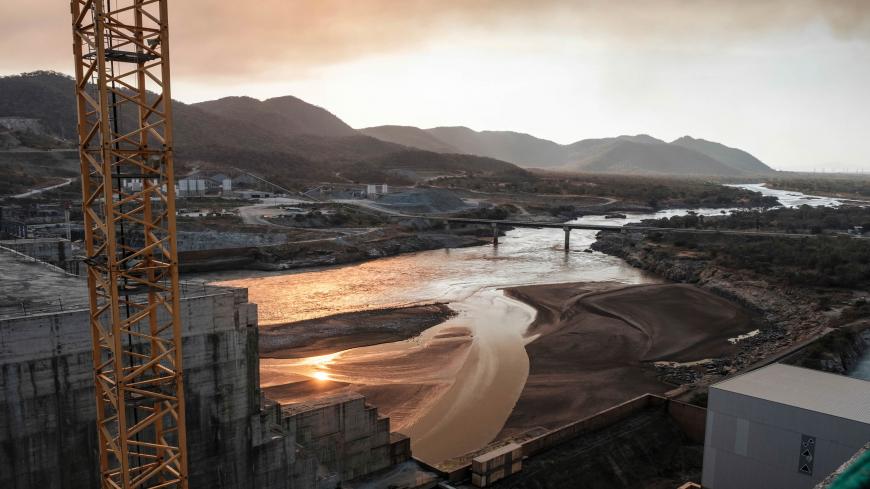 A general view of the Blue Nile River as it passes through the Grand Ethiopian Renaissance Dam, near Guba in Ethiopia, Dec. 26, 2019. - EDUARDO SOTERAS/AFP via Getty Images

CAIRO — Based on the directives of President Abdel Fattah al-Sisi and as an attempt on Egypt’s part to show solidarity with the Sudanese people, Egypt sent Aug. 18 a medical aid shipment to those affected by the floods in Sudan.

A military plane with a shipment of medicines and medical supplies took off in coordination with the Egyptian Ministry of Health in a bid to alleviate the suffering of the Sudanese people affected by the torrential rains that recently swept across Sudan.

Heavy rains in August caused massive floods in Sudan, leading to the death of more than 36 people and the destruction of dozens of villages, while thousands of Sudanese families have been displaced. The floods have also caused landslides that damaged around 5,000 homes and infrastructure in 14 of the 18 Sudanese states.

The Egyptian aid comes amid heightened tensions witnessed by the negotiations over the Grand Ethiopian Renaissance Dam (GERD) between Egypt, Sudan and Ethiopia, and in light of the lack of a binding agreement on the dam’s operation and filling between the three countries so far.

Egyptian Prime Minister Mustafa Madbouly concluded Aug. 15 a one-day official visit to Sudan at the head of a delegation that included a number of ministers to discuss a wide range of common issues. Chief among these was the GERD.

During the visit, Madbouly and his Sudanese counterpart Abdalla Hamdok held bilateral talks during which they agreed to enhance trade exchange between the two countries and develop a plan of action to overcome obstacles hindering the flow of commercial traffic, especially transport routes leading to land ports, in addition to develop cooperation in the field of investment and transportation. Marine navigation and increasing the capacity of the Egypt-Sudan electricity interconnection project between the two countries from 70 megawatt to 300 MW were also on the agenda.

The Aug. 18 final joint statement said that Egypt and Sudan had agreed on the need for the GERD negotiations to reach a binding agreement on filling and operating the dam in a way that preserves the rights and interests of the three countries. It continued that no unilateral measures shall be taken before reaching a satisfactory agreement for the three parties.

Tarek Fahmy, professor of political science at Cairo University, told Al-Monitor, “What Egypt is currently doing is part of its strategy to support Sudan in the north and south. This was confirmed by the recent Egyptian delegations’ visits to North and South Sudan.”

Fahmy added that the medical aid Egypt sends to Sudan is not politically motivated, because the aid is provided due to the special relations between the two countries. But, in general, Egypt is seeking to have the Sudanese position converge with its own in regard to the dam, and this will inevitably affect the negotiations and empower the two sides in relation to Ethiopia.

Fahmy noted that Sudan’s position vis-a-vis the GERD during the transitional phase that followed the fall of the regime of President Omar al-Bashir at the end of 2018 was supportive of Ethiopia given Ethiopian promises to Sudan at the time.

He said that had the Egyptian-Sudanese agreement occurred at the beginning of the dam crisis, it would have made a difference in the course of the negotiations.

Fahmy added that Sudan is currently beginning to show compatibility with the Egyptian position in light of its direct interests, and because the Sudanese side is well aware that Egypt is a country that can provide assistance not only in the medical field but in other fields as well.

Madbouly said during a Cabinet meeting in the city of el-Alamein in western Egypt Aug. 19 that there is consensus in the Egyptian and Sudanese positions regarding the GERD, and that there is an Egyptian interest in strengthening relations with the Sudanese people, as well as a clear Sudanese interest in attracting Egyptian investors.

Rakha Hassan, a member of the Egyptian Council for Foreign Affairs, concurred. He told Al-Monitor over the phone that the existence of a consensus between the Egyptian and Sudanese positions regarding the GERD would create a strong front during the current negotiations between the three countries.

He said that Egypt takes an interest in consolidating Egyptian-Sudanese relations because the two sides represent a strategic depth for the other, and because Sudan is an important crossing point for the Nile waters toward Egypt.

"Egypt is always keen on joint cooperation with Sudan regardless of the differences," Hassan added.

He continued that Sudan’s recent position has begun to shift toward the Egyptian position vis-a-vis the GERD and stressed the need to reach a binding legal agreement regarding the dam.

“I hope that Sudan will maintain its position so that the African Union — headed by South Africa — can solve the problem before the end of its current session in February,” he said.

Egypt and Sudan have special bilateral relations. On the political level, there are several joint dossiers, the most prominent of which is the Nile water, security and stability in the Red Sea Basin and the Horn of Africa, and the fight against terrorism and extremism. As for the economic aspect, the volume of Egyptian investments in the Sudanese market is estimated at $10.1 billion, according to 2017 statistics by the Egyptian State Information Service. Also, 315 Sudanese companies operate in Egypt and their investments include industry, trade, agriculture and financial services. Add to this the Egypt-Sudan electricity interconnection project.

Amani al-Taweel, director of the African program at Al-Ahram Center for Political and Strategic Studies, refused to link any of Egypt's behavior toward Sudan to the GERD issue. Egypt’s water security is a fundamental concern, but Egyptian-Sudanese relations are not limited to politics and they date to the 1970s, he said.

Taweel added that there are factors that determine the Egyptian interests in Sudan and they go beyond the GERD, including security factors associated with the Egyptian vision for Sudan’s stability, which by extension constitutes stability for Egypt.