Ansar al-Islam is a Kurdish Salafist and jihadist group operating in the Kurdistan mountains in northern Iraq all the way to Latakia in Syria, fighting against the Syrian government. 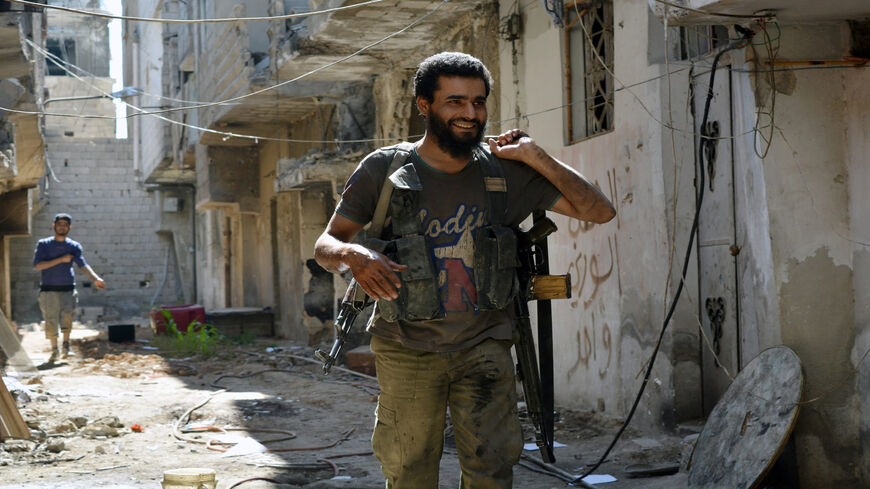 Opposition fighters belonging to Ansar al-Islam and Ahrar ash-Sham walk on a street next to the frontline that divides rebel and regime-controlled areas in the Tadamon neighborhood, south of Damascus, and near the Yarmuk Palestinian refugee camp, Syria, June 15, 2015. - Rami al-Sayed/AFP via Getty Images

IDLIB, Syria — Ansar al-Islam is considered a Salafist-jihadist movement seeking to establish an “Islamic state” according to its own vision and Islamic governance in a bid to obtain and preserve the “legitimate rights” of the Kurdish people.

The group was established in September 2001, basing itself in northeastern Iraq, notably in the areas of Iraqi Kurdistan.

In 2014, Ansar al-Islam established itself in Syria, notably in Damascus and its countryside, and Quneitra, through a merger with the Usama ibn Zayd Brigade, Al-Ezz bin Abdul Salam Brigade and Al-Adiyat Brigade.

In February 2015, it announced the establishment of its northern branch in Syria’s northwestern province of Idlib, and has been mainly active in the northern countryside of Latakia.

Ansar al-Islam operates under the umbrella of the Rouse the Believers operations room, which was founded in October 2018 and includes Hurras al-Din, Ansar al-Tawhid and Ansar al-Din Front.

According to sources close to Ansar al-Islam who spoke to Al-Monitor, the group is led by Syrian individuals of Kurdish origin, who despite the fact that they espouse a similar ideology of al-Qaeda, deny having any organizational ties to it. In fact, Ansar al-Islam refuses to fight outside Syria and does not support al-Qaeda’s operations around the world, according to the sources. The group also refrains from interfering in the local community’s affairs, as it only sticks to fighting the Syrian government forces on the frontlines, the sources noted.

The sources said that Hayat Tahrir al-Sham (HTS), which controls Idlib province, is actively seeking to restrict Ansar al-Islam’s movements by arresting some of the group’s leaders, and to prevent it from collecting money from zakat (Islamic charity) and donations.

According to the same sources, Turkey requested HTS to “end” the presence of Ansar al-Islam in Syria, given the fact that this group is Kurdish and has connections with Kurdish Salafists in Iraqi Kurdistan — something that Ankara considers a jihadist threat against it.

HTS sources, however, denied these claims that they deemed “unfounded,” saying that HTS does not act upon Turkey’s orders as Ansar al-Islam is trying to convey.

Abbas Sharifeh, a Turkey-based researcher on jihadist groups at the Jusoor Center for Studies, told Al-Monitor, “Ansar al-Islam counts some 250 fighters deployed on the frontlines with the Syrian regime in coastal mountains in northwest Syria. The group has poor equipment and is also poorly funded. They fight with light weapons only.”

He said, “HTS prevented the group from taking any donations from contributors. The group has little to no influence on the ground. It is merely an extension of the Iraqi Ansar al-Islam, espousing a Salafist-jihadist ideology. But they [the fighters] are independent and do not follow any jihadist group. Previously, they had Iraqi commanders but now their leaders are mostly Syrian."

Sharifeh added, “There is a constant tug-of-war between the group and HTS. Sometimes HTS arrests some of the group’s members, but it does not seek to dismantle it as its operatives are fighting the Syrian regime on the battlefields, something that is beneficial for HTS, which only seeks to keep them in check.”

He explained that Turkey wants to keep the lid on the different opposition groups so they are not affected by the jihadist chaos in northwest Syria.

“This [the chaos] is in the interest of Russia, which seeks to use the [presence of] jihadist groups as a pretext to launch a military campaign in Idlib. Otherwise, Ansar al-Islam is a weak group and HTS can destroy it at any given moment. It has already arrested several of the group’s leaders, without triggering any response or retaliation [from Ansar al-Islam],” he said.

A former jihadist leader based in Idlib, known by the name of Abu Khaled al-Hamawi, told Al-Monitor, “Ansar al-Islam has a small number of fighters and poor military equipment. It seeks to fight the Syrian regime and Russia. It does not have animosity with Turkey and therefore I believe it is unlikely for Ankara to have requested HTS to eliminate it. In any case, it is not in the interest of HTS to get rid of the group now.”

Abu Suleiman al-Shami, a leader close to HTS and based in Idlib, told Al-Monitor, “HTS does not take orders from any party and does not intend to dismantle Ansar al-Islam as the group does not even remotely threaten it, unlike other jihadist groups such as the Islamic State [IS] or al-Qaeda-affiliated groups.”

He added, “Also, Ansar al-Islam does not meddle in the governance and management of affairs in Idlib. The group has no popular or media support and no capabilities to attract young people, which makes it insignificant and harmless to HTS."

It seems HTS is seeking to take advantage of such small jihadist groups in its negotiations with the West, presenting itself as the party fighting these jihadist group that are close to IS or al-Qaeda.

HTS, which has its origins as an offshoot of al-Qaeda, has been designated a terrorist group by the United States and the United Nations Security Council.

This is why HTS is keeping a close eye on the movements and activity of any of these groups.