The bipartisan group called on the administration to mobilize the international community to support Yemen's humanitarian needs. 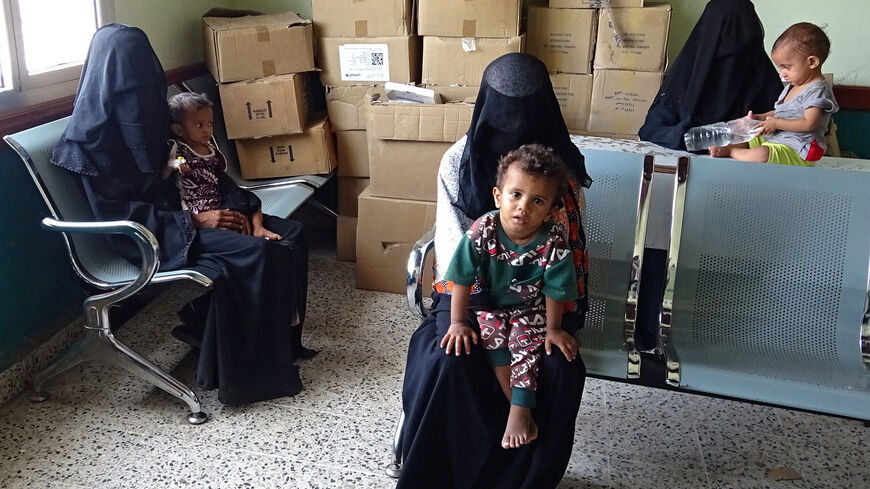 Yemeni women wait with their malnourished children at a medical center in Yemen's war-ravaged western province of Hodeida, on April 24, 2021. - KHALED ZIAD/AFP via Getty Images

A bipartisan group of senators is calling on the US administration to throw its weight behind another international donor conference for Yemen after the last one raised less than half of what the United Nations said was needed to stave off a looming famine in the war-torn country.

“We urge you to support another donors conference that fills that funding shortfall, as doing so could mean the difference between life and death for millions of Yemenis,” Sens. Chris Murphy (D-Conn.), Jeanne Shaheen (D-N.H.), Todd Young (R-Ind.) and Jerry Moran (R-Kan.) wrote to Secretary of State Antony Blinken on Tuesday.

At a high-level fundraising conference on March 1, donor countries pledged just $1.7 billion in humanitarian aid, far short of the $3.85 billion that the United Nations said was necessary to prevent famine-like conditions throughout Yemen and alleviate what is considered the world’s worst humanitarian crisis. The United States was among the top contributors, announcing $191 million in additional funds.

After six years of war between the Iran-aligned rebels and the Saudi-led coalition backing the government, 20 million Yemenis — roughly two-thirds of the population — require humanitarian aid to survive. The UN estimates 16 million people will experience hunger in the next year and some 400,000 children could starve to death.

UN Secretary-General Antonio Guterres has described cuts to humanitarian aid in Yemen as “a death sentence” for the millions who depend on it. The funding crunch has forced the UN to close many of its water, sanitation and health facilities across Yemen, which even before the war was considered the Arab world’s poorest country.

“The conditions in Yemen have not been this dire since 2018, when the UN was warning that half of the country was at risk of famine,” the lawmakers wrote. "Unlike in 2018, the international community has so far mostly failed to rise to the challenge and provide the robust funding needed to stave off this catastrophe."

Sweden and Switzerland, which co-hosted the last virtual pledging conference in partnership with the UN, have called for another fundraising conference to plug the funding gap.

“We urge you to work with other major donors to rally around that meeting, mobilizing the resources needed to stave off famine and save lives,” the letter read. “More than 20 million Yemenis depend on humanitarian assistance to survive and we cannot let them down.”

The call for fresh funding comes as the Houthis continue their assault on Marib, the government of President Abed Rabbo Mansour Hadi’s last stronghold in the north. The UN has warned hundreds of thousands of people could be displaced if the Iran-aligned rebels take the oil-rich city.

In March, Washington restored aid to Houthi-held parts of northern Yemen “to help meet the region's critical needs.” Last year, the administration of President Donald Trump suspended $73 million in US humanitarian aid to northern Yemen, citing concerns the Iran-aligned rebels were interfering with the distribution of humanitarian supplies.

President Joe Biden also reversed the prior administration’s foreign terrorist designation of the Houthis, which aid organizations warned could make it difficult for them to deliver aid in rebel-run parts of the country.