With millions of Yemenis "just one step away from famine," the UN called on countries to pledge generously at next month's donor conference. 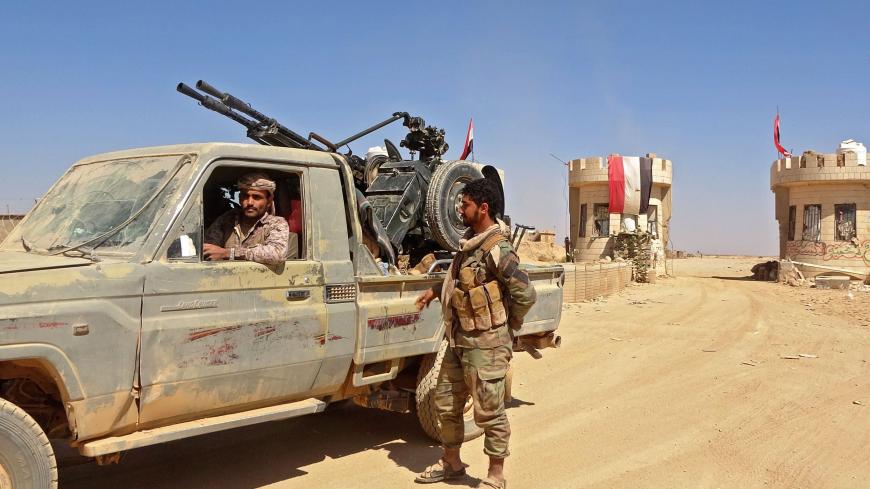 A fighter sits in a "technical" (pickup truck mounted with turret) as forces loyal to Yemen's Saudi-backed government clash with Houthi rebel fighters around the strategic government-held "Mas Camp" military base, in al-Jadaan area about 50 kilometers (31 miles) northwest of Marib in central Yemen, on Nov. 22, 2020.

UN officials are appealing for urgent international aid to Yemen as famine looms and thousands of civilians flee a Houthi offensive on the oil-rich city of Marib.

The Iran-aligned Houthi rebel group, which controls the capital, Sanaa, and much of the war-torn country, is pressing ahead with a renewed offensive on the government-held city of Marib. According to the UN, at least four missiles have landed in the city in the last 10 days, killing at least three civilians.

“The attack on Marib must stop,” the UN special envoy to Yemen, Martin Griffiths, told the UN Security Council on Thursday.

“It puts millions of civilians at risk, especially with the fighting reaching camps for internally displaced persons," he said. "The quest for territorial gain by force threatens the prospects of the peace process.”

The fighting comes as Yemen inches closer to what the UN warns would be the worst famine the world has seen in decades. More than 16 million Yemenis are going hungry, 5 million of whom are “just one step away from famine,” the UN says.

During a briefing to the 15-member council Thursday, UN humanitarian chief Mark Lowcock warned that the fighting in Marib “threatens to send hundreds of thousands of people again running for their lives at a time when everyone should be doing everything possible to stop famine.”

To stave off a famine in Yemen, Lowcock called on international donors to up their contributions. The current funding shortfall has forced the UN to close many of its water, sanitation and health facilities across Yemen, which even before the war was considered the Arab world’s poorest country.

Lowcock said UN humanitarian operations in Yemen require at least $4 billion to stay afloat this year, more than double of what was received in 2020 but roughly what was received in 2019, the last year UN "assessments confirmed famine-like conditions." He called on countries to pledge generously at an upcoming virtual fundraiser, which will be hosted by UN Secretary-General Antonio Guterres, Switzerland and Sweden on March 1.

The Houthi offensive on Marib comes as the Biden administration’s formal revocation of the group’s terrorist designation took effect this week. Humanitarian groups had warned the Trump administration’s decision to blacklist the Houthis could complicate the delivery of live-saving aid.

Yemen is descriubed by the UN as the world’s worst humanitarian crisis. More than 80% of the population — over 24 million people — rely on humanitarian assistance to survive.

Earlier this month, the Biden administration ended support for the Saudi-led coalition in Yemen, but pledged to defend the kingdom from Houthi threats. The Iran-aligned rebels have in recent weeks stepped up their cross-border attacks targeting Saudi Arabia.

In a statement Tuesday, the State Department called on the Houthis to halt their military operations, warning their latest assault on Marib is “the action of a group not committed to peace or to ending the war afflicting the people of Yemen.”

The Saudi-led coalition said Wednesday that it hsd downed two explosives-laden drones launched in the direction of civilian areas in southern Saudi Arabia. Last week, the rebels claimed responsibility for a drone attack targeting the kingdom that came as the new US special envoy for Yemen, Timothy Lenderking, visited with officials in Riyadh.