More and more decision-shapers within the ultra-Orthodox community are coming out against their own leadership, calling on authorities to thoroughly investigate the Mount Meron stampede. 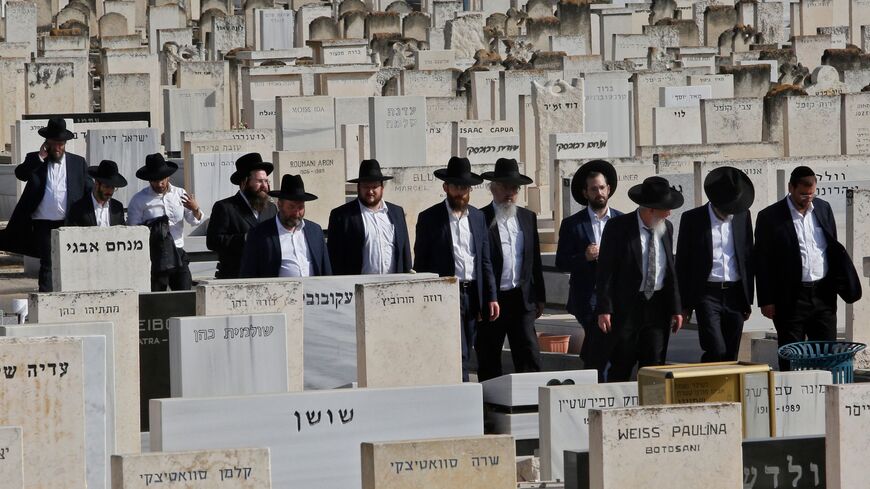 Ultra-Orthodox Jews attend the funeral of one of the victims of the Mount Meron stampede at Segula cemetery in Petah Tikva, Israel, on April 30, 2021. - GIL COHEN-MAGEN/AFP via Getty Images

“The Jewish world took a major hit. Everyone is trying to unite and grow stronger. Once-hostile sectors are removing the barriers. People in Tel Aviv are donating blood to the ultra-Orthodox. Youth movements are making pilgrimage to Bnei Brak to console the grieving families. Ultra-Orthodox and secular Jews are reconciling. We are one nation again. It is only our politicians, who continue with their ugly habits, rejecting some and boycotting others. Sorry, but given your behavior, you are not worthy of this people.”

This scathing piece was written by senior ultra-Orthodox journalist Arye Erlich on Twitter on May 3. It was four days after the devastating tragedy at the traditional Lag Ba’Omer celebration [April 29-30] at the tomb of Rabbi Shimon Bar Yochai on Mount Meron in northern Israel.

The Lag Ba’Omer tragedy was the biggest civilian catastrophe in all of Israel’s history. It is sending powerful shock waves across the ultra-Orthodox sector, including its political leadership. Nothing like it had ever been seen before.

The incident has left the whole country reeling. On that one night, 45 people lost their lives, including children and parents, yeshiva students and followers of Hassidic courts, Israelis and visitors to the country, many of whom came specially to celebrate Lag Ba’Omer at Mount Meron. All of them were trampled and suffocated in a matter of minutes. They relied on the authorities to ensure their safety, only to become the victims of what appears to be negligence.

There are dozens of new orphans, widows, and bereaved parents after the devastating incident. Among the victims were 13 children and teens, including two sets of brothers, all of them under the age of 18. Yehuda Leib Rubin, 27, of Beit Shemesh, left behind three children. One of them, Yonatan, just 4 years old, recited the Kaddish prayer over his father.

An entire country came together in mourning that tragic night. But there was also a growing sense of rage, resulting from all the unanswered questions: What caused the biggest civilian tragedy in all of Israel’s history? What were all the faults and shortcomings? Where did the organizers turn a blind eye? Who was ultimately responsible? What was the role of the religious leadership in the disaster? Most of all, how can a disaster like this be prevented in the future?

More and more public opinion shapers in the ultra-Orthodox community are now demanding the creation of a commission of inquiry to investigate the failures and hold those responsible to account.

These voices are leveling their charges in a clear voice against the ultra-Orthodox political leadership. They will need to be held responsible for the disaster, which had long been seen as a possibility and as many now say was only a matter of time. For years, the hillside complex containing the tomb has been managed as an “autonomous region” by various groups of powerful ultra-Orthodox stakeholders. Official oversight was practically impossible, the buildings and structures were in poor shape and building violations were never enforced. Instead, groups of private interests wielded total control over the site.

Erlich was not the only member of the ultra-Orthodox community to speak out. Over the past few days, more and more journalists like him have appeared on TV and other mainstream outlets, including social networks. Common to all of their appearances was a scathing criticism of their leadership.

Echoing Erlich’s call for an official commission of inquiry is Yishai Cohen, senior editor of the Kikar Shabbat website. Like Erlich, he is using the secular media to ensure that his call is heard. He tweeted May 3, “An official commission of inquiry now. The blood of the 45 victims is not cheap. Period. They will not silence the demands of so many of the families, the public, the sector, everyone. Only people who have something to hide are hiding.”

The public debate now revolves around what kind of inquiry will be conducted. Everyone agrees that the biggest civilian disaster in Israel’s history must be investigated. The question remaining is by whom.

One option is an official commission of inquiry headed by a judge, nominated either by the government or by the Knesset’s audit committee. Such a commission is considered to be a powerful mechanism that can operate independently. It can summon people to testify and force people and groups to submit information. It can draw weighty conclusions, which could impact the fates of public figures in various ways, including criminal indictments.

A famous example of this is the official commission of inquiry that investigated the events at the Sabra and Shatilla refugee camps during the First Lebanon War. Known as the “Kahan Commission” (for the judge, who presided over it), it led to the removal of Ariel Sharon from the Defense Ministry (the commission recommended his removal).

If a similar commission is eventually formed to investigate the Mount Meron tragedy, senior ultra-Orthodox officials will surely be in its crosshairs. These will include the head of ultra-Orthodox Shas party, Interior Minister Aryeh Deri, and other longtime Knesset members, such as Yaakov Litzman and Moshe Gafni. They are believed to have pressured the authorities — and Prime Minister Benjamin Netanyahu himself — not to use coronavirus regulations to limit the number of participants at the event.

They are also being blamed for failing to address the anarchic situation at the tomb of Bar Yochai, even though it has been that way years. In fact, it has long operated like a popular pilgrimage site in a failed state and not in a country that prides itself on being the “high-tech nation.”

Compounding the already harsh feelings among the ultra-Orthodox sector is the fact that in the days immediately following the disaster, their leadership has gone missing. They shrouded themselves in silence, even if this leaves the impression that they are trying to dodge responsibility. This is probably because they are concerned about the outcome of a commission of inquiry.

These harsh feelings against the ultra-Orthodox leadership are only intensifying a yearlong public antipathy and outrage, which began as a reaction to their handling of the coronavirus.

In hindsight, the pandemic triggered a major shake-up in ultra-Orthodox society. The ultra-Orthodox, who constitute 12.5% of Israel’s population, came under attack during the coronavirus outbreak. Suddenly the secular community was exposed to the way that the “ultra-Orthodox autonomy” is being run within modern, democratic Israel. While the country’s school system was shut down, educational facilities in the ultra-Orthodox sector ignored coronavirus restrictions and continued to operate as usual, even when the pandemic spread across their cities and began to take its toll.

A straight line is now being drawn to connect what happened during the yearlong coronavirus pandemic and the tragedy in Meron. It offers a clear view of what is happening behind the scenes, right here in Israel. Because of its proximity to the centers of power, ultra-Orthodox society receives enormous funding from the government, only to operate as a “state within a state.” This arrangement has been going on for decades. It seemed to be convenient for everyone, at least until last year, when the young ultra-Orthodox masses began to wake up. Suddenly, they realized that something needs to change.

According to journalist Yair Ettinger, who studies ultra-Orthodox society, “The past few years have disproved the old thesis that the participation of the ultra-Orthodox parties in government will lead to greater integration and a shift to the center. The fact that they wield enormous power (and are practically an ultra-Orthodox 'deep state') has resulted in them raising the walls and barriers even higher. There is now an even more intense 'ultra-Orthodox religiosity': They have reinforced their exemptions from a core curriculum in their schools and from military service, they have shattered the official, state-run conversion process and overturned restrictions relating to the coronavirus and Meron. If there is a change, it will not come from the top.”

What Ettinger means is that any changes in the ultra-Orthodox community will be from the bottom up, beginning with the community itself, including those young ultra-Orthodox journalists who are demanding answers now. They are no longer willing to look on with their eyes shut.