Despite years of warnings that the site was unsafe for such large events, thousands of worshipers gathered at Mount Meron for a celebration that turned into a nightmare. 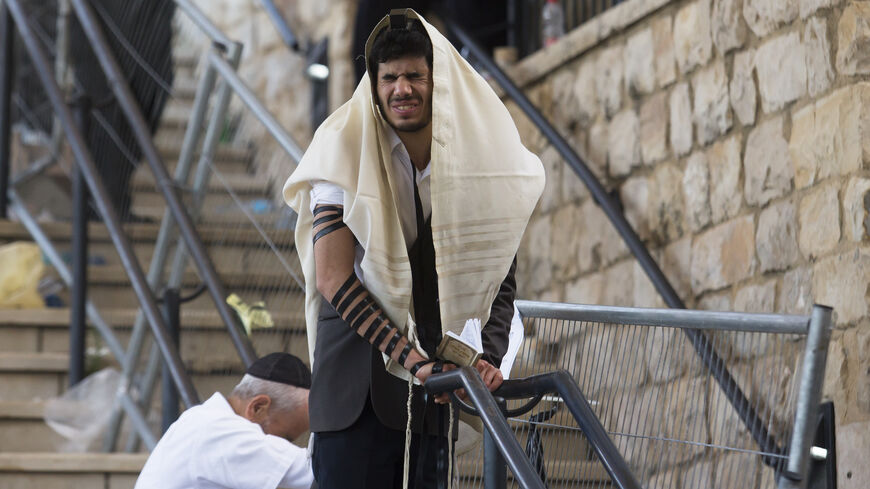 An ultra-Orthodox Jewish man prays after dozens were killed in a crush at a religious festival in Mount Meron on April 30, 2021, in Meron, Israel. - Amir Levy/Getty Images

It was shortly after midnight, the celebration at its frenzied peak. Tens of thousands of people were dancing ecstatically around bonfires to the sounds of a Klezmer band. The traditional festival on Mount Meron in the Galilee, at what is believed to be the burial site of the second century Talmudic sage Rabbi Shimon Bar-Yochai, was also marking an end to the lockdowns and social distancing that had prevented the ritual last year. All eyes were on the main event, the lighting of a huge bonfire by adherents of the ultra-Orthodox Toldot Aharon Hassidic sect. Suddenly, the band stopped.

Footage of the densely packed crowds aired on television earlier in the evening in what was billed as the biggest ever celebration of the Lag Ba’Omer holiday.

According to various news reports, a celebrant fainted and tripped others on the stairs as they were making their way out of the site, setting off a stampede that crushed at least 45 people to death and injured some 150 in what is being described as one of the worst disasters in Israeli history.

Since its founding, Israel has been plagued by fighting and terrorist attacks. It has fought seven wars in 73 years, mounted countless military operations and quelled two lengthy Palestinian uprisings. The disaster in the early hours of April 30 was especially horrific in its dichotomy — a joyful celebration at the tomb of one of Judaism’s most revered symbols that turned within seconds into a seething, heaving sea of trampled humanity. Many of the pilgrims come to Meron annually to pray for miracles.

The tragedy would have been avoided were it not for Israel’s defeat of COVID-19 with the mass vaccination rollout that has made it the first country in the world to emerge from the pandemic. Several days prior to Lag Ba’Omer, Interior Minister Aryeh Deri, who heads the ultra-Orthodox Shas Party, and Public Security Minister Amir Ohana reached an agreement on lifting all the coronavirus restrictions at the celebration. After the event was canceled last year for the first time in Israeli history, this return to normal was met with tremendous enthusiasm and drew an estimated 100,000 celebrants to the site, which was simply too small to contain them all.

Israel is a world leader in science and technology. It can intercept rockets in mid-flight and send satellites into space. It prides itself on its ingenuity and thinking outside the box, but they can mask disorganization and shoddy work. Such was the case with the bridge collapse at the 1997 Maccabiah Games (the Jewish Olympics) that resulted in the deaths of four athletes on their way to the opening ceremony, the 2010 Mount Carmel fire in which 44 Israelis lost their lives and other tragic events.

Lag Ba’Omer is not a primarily religious observance the way that Rosh Hashana, Yom Kippur and Passover are. It is a tradition underpinned by two iconic historic events — the death of Bar-Yochai and the contemporaneous heroic revolt by Jewish warriors against the Romans, known as the Bar Kochva Rebellion. The customary bonfire lighting on the top of one of the Galilee’s highest mountains has evolved into a colorful religious and ultra-Orthodox festival, featuring prayer, various religious practices, dancing and song.

However, the infrastructure at the site of the annual pilgrimage is not designed for such masses and the overcrowding has prompted warnings in the past. Authorities as well as journalists covering the event have cautioned against a domino effect of the type that caused the catastrophe.

One of those who sounded the alarm in the past was ultra-Orthodox reporter Aryeh Erlich. “The narrow exit route leading from the bonfire lighting ceremony creates a human bottleneck and horrible shoving to the point of a real crush. … It is the only way out. … The lighting ceremony must not be held at the site unless a broad, well-signed exit is created,” he wrote and tweeted three years ago. The writing was on the wall, but nothing was done.

Israel has been in a state of euphoria in recent weeks over the successful vaccination campaign that has set it free from most restrictions. The decision to lift them all at Mount Meron, despite the warnings of public health officials, was apparently prompted mainly by the desire of Prime Minister Benjamin Netanyahu and his government allies to curry favor with the politically powerful ultra-Orthodox in these chaotic political times.

Thousands of families and individuals flocked in giant convoys to the mountain site. Initial findings suggest the stampede began when a celebrant fainted as he was making his way down the exit stairway and blocked the passageway as tens of thousands of people pushed to get out. As panic spread, a heaving mass of celebrants tried to escape through the narrow passage.

After years of dangerous overcrowding, the miracles ran out. In the pre-dawn hours of Friday, that passageway through which festival-goers have poured for decades was strewn with black hats, kippahs, glasses, cell phones and prayer books. The rescue workers could barely make their way through to the dead and injured.

Even at this early stage, as the bodies are being identified by grieving families, there is little doubt of the political fallout. Police approved it despite the tremendous risks and past warnings. The politicians, especially Deri and Ohana, failed to order the necessary security measures. Their boss, Netanyahu, boasted of a return to routine. It was amateur hour.

Netanyahu survived a catastrophe of similar proportions in 2010 with the Mount Carmel fire that exposed Israel’s deeply flawed firefighting system and cost the lives of 44 people, most of them prison guards trying to flee a jail engulfed in the flames. Netanyahu extricated himself from the ensuing scandal in typical fashion, blaming Interior Minister Eli Yishai — Deri’s predecessor in the job and in the Shas leadership — and emerging relatively unscathed.

But 2021's Netanyahu is quickly losing his magic touch. He has failed to parlay his personal popularity into an electoral victory in four back-to-back elections. He is standing trial on charges of bribery, fraud and breach of trust. He is unable to form a government. Netanyahu’s political career may not survive the Lag Ba’Omer disaster.