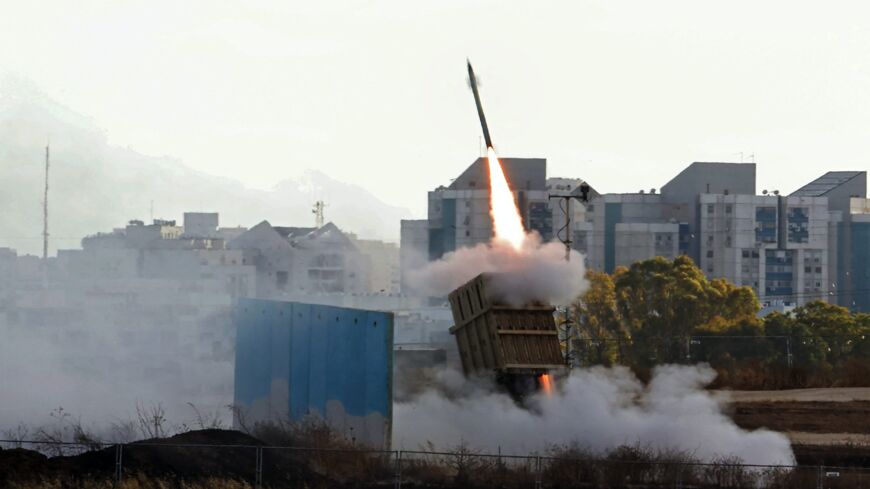 Israel's Iron Dome aerial defense system is launched to intercept a rocket launched from the Gaza Strip, above the southern Israeli city of Ashdod, on May 17, 2021. - AHMAD GHARABLI/AFP via Getty Images

Lawmakers in the US Senate are unlikely to block a $735 million sale of smart-bomb guidance systems for Israel amid the ongoing conflict with Gaza as a Thursday deadline approaches, Al-Monitor has learned.

The administration of President Joe Biden recently signed off on a request by Boeing to supply Israel with Joint Direct Attack Munition (JDAM) guidance kits, The Washington Post first reported on Monday. Two congressional aides familiar with the matter confirmed to Al-Monitor details of the sale proposal.

Biden administration officials informed Congress of the proposal on May 5, nearly a week before Hamas' rockets kicked off the latest conflict between Israel and Palestinian militants in the Gaza Strip. But the window for lawmakers in the Senate to weigh a resolution to oppose the sale has already passed.

The proposed sale has raised concerns among some House Democrats who only learned of it over the weekend, according to the Post.

A US official familiar with the sale described it as routine, having been requested well before the onset of the latest conflict. The United States previously sold Israel more than 14,000 JDAM systems — which convert unguided bombs into "smart" munitions for precision targeting — as part of a $1.8 billion munitions deal following the 2014 Gaza war.

Some opposition to broad US support for Israel's policies has emerged in Congress in recent years, as progressives increasingly object to the Israeli government’s continued blockade of Gaza and expansion of settlements in the occupied West Bank — both of which have been deemed illegal by the United Nations and the International Committee of the Red Cross.

The latest violent conflict broke out last Monday when militant groups in the Gaza Strip launched a volley of rockets after Israeli police raided Al-Aqsa Mosque compound in Jerusalem, injuring more than 300 Palestinians, many of whom had gathered to protest an attempt by Israeli settlers to displace Palestinian families living in the Sheikh Jarrah neighborhood.

More than 200 Palestinians have been killed in the conflict since it broke out, including 58 children and 34 women, with more than 1,300 reported injured. Ten Israelis have been reportedly killed, including two children, with several hundred injured. Thousands of rockets have been fired into Israel, with the vast majority having been shot down by Israel's Iron Dome defense system.

Biden administration officials continue to reiterate Israel’s right to self-defense and say they are pursuing a variety of diplomatic paths to bring about a halt to the current violence, including with Qatari, Egyptian and Jordanian officials.

But the US diplomatic mission to the UN, led by Ambassador Linda Thomas-Greenfield, has blocked at least three attempts over the past week by the other 14 other members of the UN Security Council to call for a cease-fire.

The tactic has been used by past US administrations citing concerns that UN statements could derail sensitive back-channel negotiations. Critics say it provides Israel diplomatic cover to continue targeting Palestinian militants.

Why it matters: Calls for a cease-fire have increased from Democratic lawmakers following Israel's bombing of a building that housed Associated Press and Al Jazeera media offices over the weekend. Yet Congress’ window for blocking the arms deal is closing rapidly.

Despite the criticism, bipartisan opposition to the sale ­has failed to materialize, with a number of Republicans calling for additional support for Israel. If the proposal clears Congress, it still may take several weeks, if not months, for the JDAM systems to reach Israel, according to the US source familiar with the matter.

A US defense source who spoke on the condition of anonymity described the Israeli government's approach as seizing a tactical opportunity.

White House press secretary Jen Psaki blamed Hamas for the lack of a cease-fire last week, saying that “assurances … that they were prepared to stand down proved to be false.” A spokesperson for the White House did not respond to Al-Monitor’s request for clarification.

What’s next: International diplomacy is beginning to mobilize in the apparent absence of US pressure to halt the conflict.

France’s President Emmanuel Macron discussed Egypt’s mediation effort with President Abdel Fattah al-Sisi during a conference in Paris on Monday. European Union foreign ministers are set to discuss the crisis on Tuesday and the UN Security Council plans to convene on Thursday.

Israeli officials may request additional material support from the United States if the conflict continues much longer. Zohar Palti, the Israeli Defense Ministry’s director of policy and political military affairs, met with his American counterpart, Colin Kahl, in Washington last week, though no new request was placed during the meeting, the Pentagon said.

Know more: Israeli officials remain mum on the international push for a cease-fire, Al-Monitor’s Rina Bassist writes. And Elizabeth Hagedorn reports on the latest in what critics say is the Biden administration’s fumbled messaging about the conflict.