Workers in both the private and public sector must receive the vaccine before returning to their workplaces, according to the Saudi Ministry of Human Resources and Development. 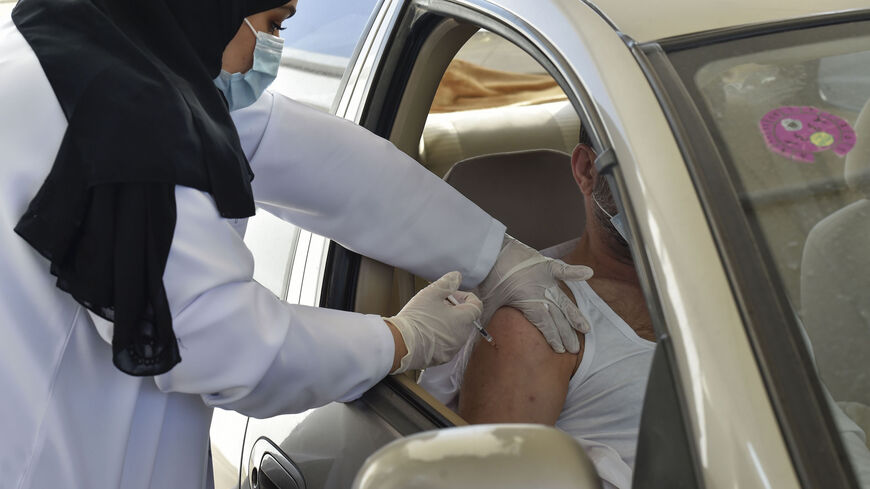 A medical worker administers a dose of the AstraZeneca COVID-19 vaccine at the first drive-through vaccination center in the Saudi capital Riyadh, on March 4, 2021. - FAYEZ NURELDINE/AFP via Getty Images

Saudi Arabia will require all private and public employees in the kingdom to be vaccinated before returning to their workplaces, Saudi authorities said Friday.

“Receiving a coronavirus vaccine will be a mandatory condition for male and female workers to attend workplaces in all sectors (public, private, non-profit),” the Saudi Ministry of Human Resources and Development tweeted on Friday.

Al Ekhbariya reported that the ministry is calling on all sectors to encourage employees to get a COVID-19 vaccine. The ministry will soon announce when the new vaccination policy is to take effect.

On Friday, the Ministry of Health reported 1,039 new cases and 13 fatalities from COVID-19, raising Saudi Arabia’s death toll to 7,045 and the total number of cases since March 2020 to 424,445. Most of the new infections were recorded in the capital, Riyadh, followed by Mecca province, health officials said.

With a population of more than 34 million, Saudi Arabia has administered more than 10 million doses across 587 vaccination centers since launching its national vaccination drive in December, the Health Ministry said on Thursday.

Saudi Arabia was the first country in the region to obtain the Pfizer-BioNTech vaccine, and in January also approved use of the AstraZeneca and Moderna vaccines. Citizens and residents can book vaccine appointments using the Health Ministry's app, called Sehhaty.

On Sunday, the Interior Ministry announced citizens vaccinated against the virus will be able to travel abroad beginning May 17 and the country will fully open its land, sea and air borders. A ban on the entry of most non-Saudi citizens from the United States and 19 other countries remains in place.

For the second year in a row, Saudi Arabia may bar international travelers from attending the annual hajj, Reuters reports. Authorities are considering allowing only vaccinated Saudi citizens and residents as well as those who recovered from the virus at least six months prior to take part in the pilgrimage to the holy city of Mecca.

The hajj normally attracts up to 2.5 million Muslims from around the world. Last July, coronavirus concerns forced the kingdom to scale back the pilgrimage to just 10,000 Saudi residents.