Tishrin Dam on the Euphrates River could shut down next month, which would affect electricity and water supplies for millions of people in autonomous administration, government and rebel territory. 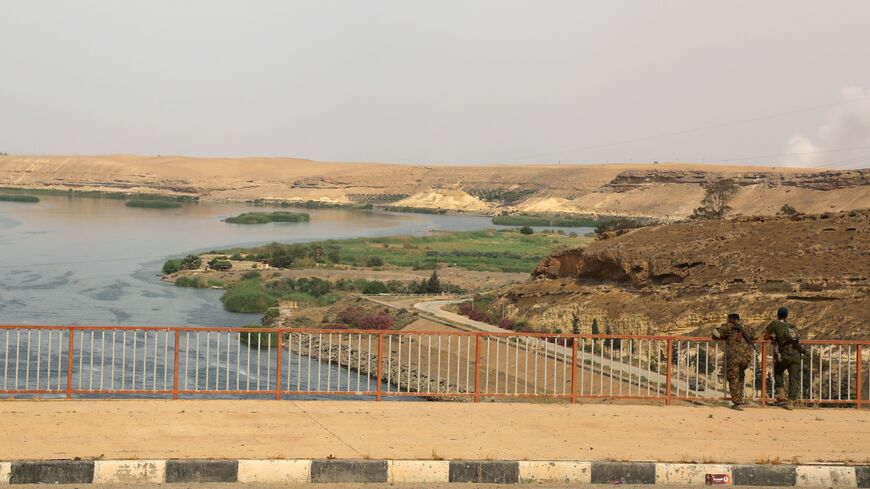 Special forces from the US-backed Syrian Democratic Forces, made up of an alliance of Kurdish and Arab fighters, stand on a bridge next to the Tabqa Dam, on May 18, 2017, which had been recaptured earlier in the month along with the adjacent city of Tabqa. In May 2021, the dam was experiencing a severe water shortage. - DELIL SOULEIMAN/AFP via Getty Images

Humanitarian organizations in northeast Syria are warning that low water levels in the Euphrates River could force the Tishrin Dam to close. This would reduce electricity and drinking water in the war-torn region.

The Tishrin Dam is currently experiencing critically low water levels, leading to electricity blackouts. If the water supply is not increased, the hydroelectric dam will need to stop operating by mid-June. The water reserves in the Tabqa Dam are also more than 80% depleted. The closure of both dams would lead to the loss of the main electricity source for 3 million people and a shortage of drinking water for more than 5 million people, according to a report by a nongovernmental organization coordination body in northeast Syria.

The Tishrin Dam is on the Euphrates River southeast of the city of Manbij. The Tabqa Dam is farther south on the same river. Both are in the territory of the Kurdish-led autonomous administration of north and east Syria.

The dams are the primary electricity source for most of the autonomous administration territory. They also provide electricity to government and Turkish-backed rebel parts of Aleppo province. The dams provide water to most of the population in Deir ez-Zor, Raqqa and Aleppo provinces, which are also under a mix of autonomous administration, government and rebel control.

Water levels in the Euphrates and accompanying electrical power issues are tied to these different factions in Syria’s civil war. In March, the autonomous administration accused Turkey of cutting water sources that flow into the Euphrates. Turkey and its Syrian rebel allies are in a state of conflict with some Kurdish groups in northeast Syria. This month, the Syrian government also blamed Turkey for the low water levels. The main military force in the autonomous administration, the Syrian Democratic Forces, have also been cutting off electricity to Turkish-backed rebel areas in northern Syria since April.

The period between January and April constitutes the flooding months for the Euphrates, when rainfall and melting snow from mountains in Turkey result in the higher water levels. Sufficient water flow has not been forthcoming from Turkey this year, resulting in less than half of the minimum water amount to keep Tishrin Dam functional by mid-May, according to the report, which was sent to Al-Monitor.

By mid-May, only two of six Tishrin Dam hydroelectric turbines were functional. If the water levels become too low for the dam to operate at all, there will be internal flooding and infrastructure damage. The issues with Tishrin have prompted authorities to use the Tabqa Dam’s reserves to provide water to people, resulting in depleted water levels there as well, per the report.

Meanwhile, there are drought concerns in Turkey. The country experienced a decrease in rainfall this year. This is one factor behind a government plan to build more dams to avert water shortages, the pro-government news outlet Daily Sabah reported in March.