The leaders in New York City’s mayoral election both defended Israel over the recent conflict with the Palestinians, though other politicians more to the left spoke in favor of the Palestinian cause. 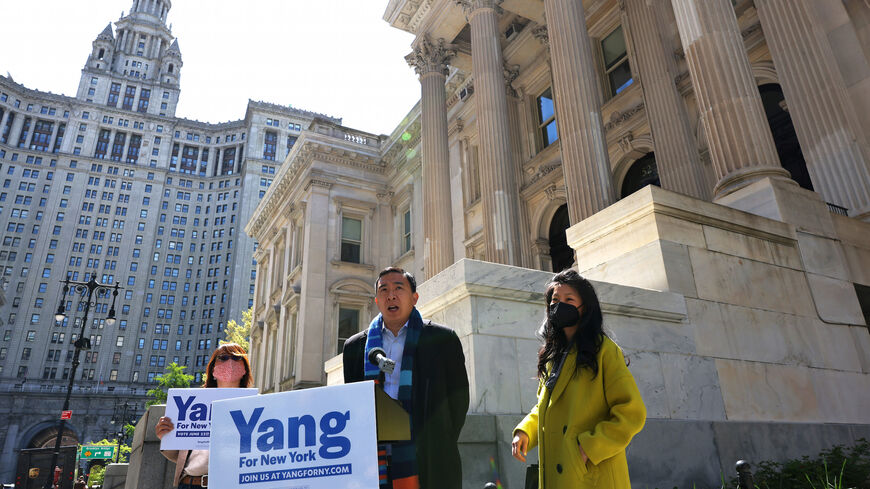 The Israeli-Palestinian conflict has again seeped into New York City politics. Some candidates for New York City mayor defended Israel in statements regarding the ongoing violence between Israelis and Palestinians, including the two front-runners in the race.

Democratic candidate Andrew Yang, who also ran for president in 2020, said he is “standing with Israel” and condemned actions by the Palestinian military and political organization Hamas.

“I'm standing with the people of Israel who are coming under bombardment attacks, and condemn the Hamas terrorists,” Yang said Monday. “The people of NYC will always stand with our brothers and sisters in Israel who face down terrorism and persevere.”

Yang walked back the comments on Wednesday, however, after speaking to some of his campaign volunteers. He said his original remarks were "overly simplistic" in a new statement.

"I mourn for every Palestinian life taken before its time as I do for every Israeli," he said.

Eric Adams made a similar statement Monday, referencing the Hebrew word for Jerusalem Day, which Israelis celebrated that day.

“Today on Yom Yerushalayim, Israel came under attack from Hamas-fired rockets in Gaza,” said Adams, who is president of the borough of Brooklyn and a former police officer. “Israelis live under the constant threat of terrorism and war and New York City's bond with Israel remains unbreakable. I stand shoulder to shoulder with the people Israel at this time of crisis.”

There is currently widespread conflict in Israel and the Palestinian territories. The unrest began with tensions near Jerusalem’s holy sites and the possible eviction of Palestinian families from the Sheikh Jarrah neighborhood in the city. Gaza-based Hamas has fired more than 1,000 rockets into Israel, leading to civilian deaths. Israel has also conducted airstrikes in Gaza, which have killed civilians and Hamas forces. Clashes involving Israeli police and Arab and Jewish protesters continue in Jerusalem, as does violence between Jewish and Arab citizens in other cities.

Yang in particular received criticism for his remarks since they did not mention Palestinian suffering in the conflict. Democratic Rep. Alexandria Ocasio-Cortez of New York accused him Tuesday of making a “chest-thumping statement” during the Muslim holy month of Ramadan.

Other New York City politicians made statements that were more supportive of the Palestinian cause. Former City Council member Jumaane Williams said Tuesday that “both Palestinian & Israeli death should be mourned,” though he received criticism on Twitter by people saying he should have only criticized Israel.

City Council candidate Alexa Aviles solely criticized Israeli attacks on Palestinians in her Tuesday statement. Candidate Brandon West called for “Palestinian liberation” in response to the conflict the same day. Both are endorsed by Democratic Socialists of America, which is vocally supportive of the Palestinian cause.

Both pro-Israel and pro-Palestine groups protested outside the Israeli Consulate in New York City on Tuesday and the demonstrations turned violent at some points. The Israeli media outlet The Jerusalem Post reported on the event.

This is not the first time Israel and Palestine have come up in New York City politics. Yang in particular has spoken in support of Israel throughout the campaign, calling New York-Israel economic ties “very significant” in March. The city has large Muslim and Jewish communities. The New York Police Department has also participated in training programs with Israeli security forces.

The New York City primary elections will take place June 22, followed by the general election Nov. 2. Yang was leading the polls for much of this year, though Adams passed him in a poll last week. The Democratic primary winner is likely to win the general election.