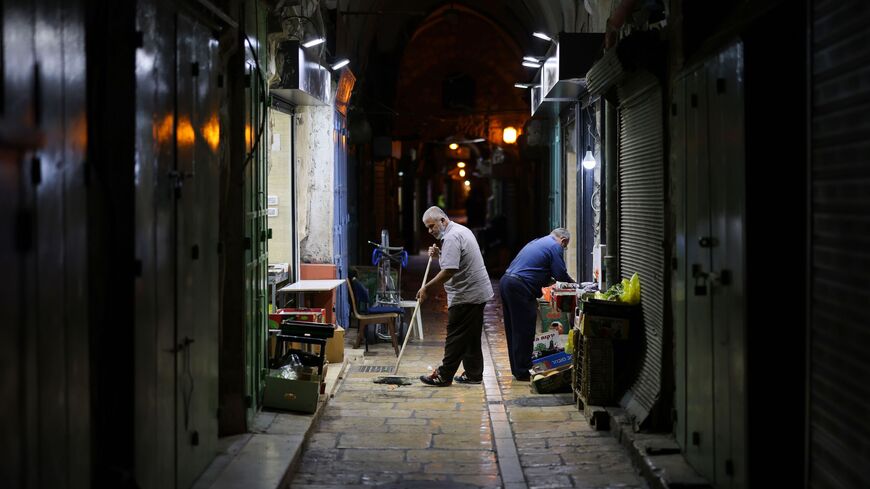 A shopkeeper sweeps in front of his store in the Arab quarter of Jerusalem's Old City on Aug. 25, 2020. - EMMANUEL DUNAND/AFP via Getty Images

Israel's Economy Ministry, in cooperation with the Koret Economic Development Funds, has created a new fund for small business loans for the Arab sector. The fund stands at 15 million shekels ($6.6 million) and plans to provide loans of up to 100,000 shekels ($30,000) to businesses in the Arab sector that have trouble securing loans from banks or the government as part of its pandemic stimulus efforts.

The deep credit crisis is one of the causes of violence in Arab-Israeli society. Much of the enormous grey market for loans is controlled by criminal organizations. Failure to make payments can mean harassment, damage to business, shootings and even murder. According to police estimates, nearly half of the firearm incidents and a quarter of homicides in Israel's Arab society stem from business conflicts and failure to pay debt.

Of the 10% of all businesses in Israel that are Arab-owned, 96% are classified as small or even micro or household businesses. These businesses employ about 65% of the Arab workforce.

But the existing funding products in the market are not suited to these businesses and according to Finance Ministry data, the average loan given to businesses in the Arab sector is 30% lower than the national average.

According to data compiled by the Economic Council for the Development of the Arab Sector, the Arab sector receives only 2% of the loans extended to the public by all banks.

Additional reasons include that relatively many Arab small business owners have limits on their bank accounts or have had their bank accounts seized. Even when the limits are removed, a business with such a history is still disqualified for loans. Banks also demand collateral that businesses cannot always supply.

To these obstacles should be added the difficulty of dealing with Israeli bureaucracy as well as a lack of trust in state institutions.

Chagit Rubinstein, vice president of operations at the Koret Economic Development Funds, told Al-Monitor that half the funding for the initiative comes from donations from the corporate sector and half from the government, with money allocated to help businesses through the pandemic. She noted that the fund will be suited to the needs of the Arab sector and provide a response to the various obstacles that prevent it from benefitting from accessible credit.

“Our past experience with another program we run, SAWA, which works with women-owned micro-businesses, proves that access to credit is a critical factor in the ability of small businesses to grow. Three years from receipt of the loan, business revenues increased 140% on average. The businesses that received a loan from the initiative were those with potential to grow revenue by at least 20% within a year of receiving the loan.”

Rubinstein revealed that in a parallel program for Arab businesswomen, the default rate is only 1.6%, largely due to a group accountability program using the microfinance method developed by Nobel Peace Prize laureate Muhammad Yunus. Yunus created a bank that granted small loans to women in Bangladesh and helped them leave the cycle of poverty.

Ran Koiti, director of the small and medium businesses department at the Ministry of the Economy and Industry, said, “Households and small businesses in the Arab sector are characterized by higher financial vulnerability because of lack of credit. Thus, they turn to the grey market, some of which is run by criminal organizations. This situation has become very common since the pandemic. Loans from the grey market increase violence in the Arab sector as well as harm to innocents, lead to the collapse of many businesses and drag many families into poverty.”

Will this fund meet the needs of the Arab sector? “No, this business sector's scope of need is more than three times that of the fund,” said Rubinstein. She thinks that the government has dawdled in finding suitable solutions, and even when it makes decisions they tend not to be implemented. For example, in 2006 the government decided to establish a loan fund for businesses in the Bedouin sector and it still has yet to be created.

In his announcement of the program, Minister of the Economy and Industry Amir Peretz said that the new fund is a harbinger of more programs to revive and develop businesses in the Arab sector.

Much of the extended five-year plan for Arab-Israeli society is devoted to this issue, including a government-guaranteed loan fund.

In cost-benefit terms, the promotion and growth of businesses in the Arab sector will yield positive results not only for the Arab sector, raising the standard of living and creating jobs, but for the entire Israeli market by increasing productivity, closing gaps and increasing social equality.