Candidates vying for presidency in Iran were given five days to register their bid in an election that is expected to revolve around the economy and the fragile nuclear deal. 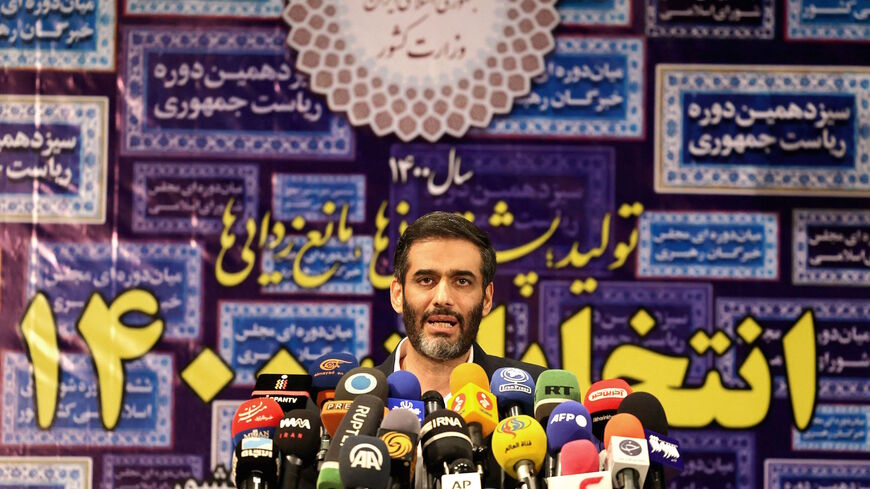 Former Revolutionary Guards' official Saeed Mohammad registers his candidacy for Iran's presidential elections at the Interior Ministry in Tehran on May 11, 2021. - ATTA KENARE/AFP via Getty Images

The registration of candidates for Iran's June 18 presidential election officially began in the country's Interior Ministry headquarters May 11 and will continue for five days.

According to Iranian media, on the very first day 57 hopefuls showed up for registration. Traditionally, candidates standing valid chances of victory hold off their appearance until only a few hours before the deadline.

At stake in the upcoming election is the economy, which has been tremendously battered by US sanctions, reimposed after the Iran nuclear deal formally known as the Joint Comprehensive Plan of Action (JCPOA). The revival of the accord is currently being indirectly negotiated by Iran and the United States in the Austrian capital, Vienna.

The fate of the deal is widely expected to overshadow the presidential campaigning and as the clock ticks on it, Iran's incumbent president Hassan Rouhani is hoping to get it back on track and have the onerous sanctions lifted before he departs form the presidential office.

During the registration at Iran's Interior Ministry, the candidates were surrounded by supporters with questions on how they are to handle the JCPOA. Dehghan, a former defense minister, acknowledged the accord as a "national decision," but criticized the way it has been implemented.

Mohammad, whose candidacy has seen much controversy, declared he is not representing any political faction. When asked whether he would withdraw from the race if chief justice Ibrahim Raisi announces his bid, Mohammad postponed the answer to the time when the candidate vetting process is over.

The candidacy of the chief justice has been subject to speculation during the past few weeks. The hard-line cleric is believed to have the blessing of the majority of Iran's conservatives. IRGC-linked Tasnim News Agency reported on Tuesday that the cleric has made up his mind and is "very likely" to officially register his candidacy before the set deadline. Despite divisions in the camp, Raisi's nomination is anticipated to trigger the withdrawal of many conservative candidates.

The moderate-Reformists, on the other hand, remain equally if not more divided. The camp is scrambling among a long a list of names. Foreign Minister Mohammad Javad Zarif announced on Monday for yet another time that he will not run for president, dashing hopes among the camp's leaders. Ali Larijani, a close ally of President Rouhani, is now one of the key names that could represent the moderates as well as the traditional conservatives.

Nevertheless, none of those figures enjoy an absolute guarantee to enter the race. Under Iran's constitution, the hard-line Guardian Council is in charge of the vetting process. The council has in the past acted with continuous decisions by purging anyone it deems unfit.

This time around, the council has entered a showdown with the moderate forces. It has issued a list of new qualifications for the candidates to meet. Among those conditions are the age limit between 40 and 70. More strict requirements include a minimum four-year higher management background.

In a strongly-worded statement, President Rouhani accused the council of acting beyond its jurisdiction, a charge that the body's spokesman denied in an uncompromising tone, an indication of how tough the battle between the rival factions for this year's presidency could turn in the weeks to come.