Two US senators met with Sudan’s interim leaders in Khartoum on Tuesday as the Biden administration seeks to forge lasting ties with the new government. 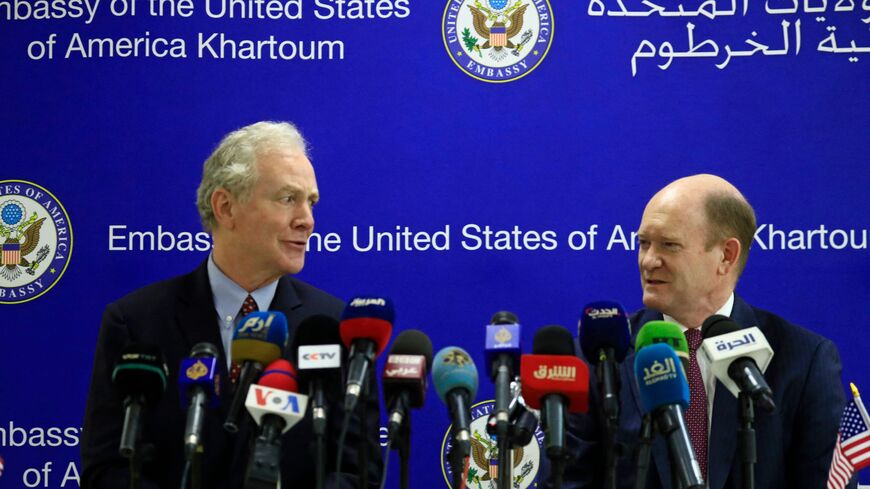 US Sens. Chris Van Hollen (L) and Christopher Coons (R) hold a press conference during their visit in the Sudanese capital Khartoum on May 5, 2021. Sudan announced securing a multimillion dollar bridge loan from the United Kingdom, Sweden, and Ireland to clear its arrears with the African Development Bank. Sudanese authorities are still in talks with the United States over further financial steps to help the post-Bashir transitional period, according to US officials. - ASHRAF SHAZLY/AFP via Getty Images

Democratic US Senators Chris Coons of Delaware and Chris Van Hollen of Maryland met with Sudan’s interim leaders in Khartoum on Tuesday as the administration of US President Joe Biden seeks to forge lasting ties with the east African country’s new government.

The lawmakers discussed US economic support for Sudan’s recovery amid its ongoing transition to democratic governance following the popular ouster of longtime dictator Omar al-Bashir in 2019, according to a statement by Sudan’s Finance Ministry.

They also discussed the controversial Grand Ethiopian Renaissance Dam and “the matter of the demarcation of state borders and their international recognition” — an apparent reference to Sudan’s ongoing border dispute with Ethiopia.

Why it matters: The Biden administration is serious about bringing Sudan into Washington’s orbit, building on the Trump administration’s rescission last year of Khartoum's designation as a state sponsor of terror.

Sudan’s significant resource wealth and youth population offer it the potential to become a regional player in an increasingly strategic region of Africa. Moreover, Khartoum’s transition to democracy could open the path for military ties with the United States as Washington seeks to outpace Russian and Chinese influence on the continent.

Major obstacles remain, but the United States and its allies are offering help.

Sudan’s Finance Ministry announced Wednesday it had secured a $425 million loan from the United Kingdom, Ireland and Sweden to clear Khartoum’s arrears with the African Development Bank. Khartoum remains heavily indebted from decades of corruption and misrule.

Ibrahim announced the loan procurement Wednesday, as well as a multimillion dollar grant from the African Development Bank to support economic and financial reforms.

“We will no longer have arrears from the African Development Bank and soon the arrears to the International Monetary Fund will end,” Ibrahim said in a statement Wednesday.

The United States and Sudan signed an agreement in January for a $1 billion bridge loan to clear Khartoum’s arrears with the World Bank. The Biden administration is also working to forgive Sudan’s bilateral debt to Washington.

Coons told reporters in Khartoum on Wednesday that the amount is about $3 billion "in this year’s spending bill,” adding that the process “will take some time.”

The administration is also seeking ways to fund a large shipment of wheat promised to Sudan by the Trump administration as part of Khartoum’s agreement to establish ties with Israel.

What’s next: US envoy for the Horn of Africa region Jeffrey Feltman kicked off a more than weeklong tour with stops in Egypt, Eritrea, Ethiopia and Sudan this week.

It is his first visit to the region since being appointed to the newly created position by President Joe Biden last month.

High up on the agenda are likely to be Ethiopia’s bloody Tigray conflict, the border crisis between Ethiopia and Sudan and the dispute over the Grand Ethiopian Renaissance Dam, all of which are potentially threatening the stability of the region.

The dam dispute is unlikely to be resolved before a second filling of its reservoir this summer, but Feltman told Foreign Policy he intends to have tough conversations with Ethiopian Prime Minister Abiy Ahmed and Eritrean President Isaias Afwerki about the violence in Tigray, which US Secretary of State Antony Blinken has described as an “ethnic cleansing.”

On the economic front, an international business conference to attract investment in Sudan is set to be held in Paris on May 17.

And Ahmed’s stance on his country’s Nile dam has pushed Khartoum closer to Cairo, which continues to hint at possible military action against Addis Ababa over the project.