Lebanese media reported that Palestinian groups in the country launched the rockets, which landed in the sea. 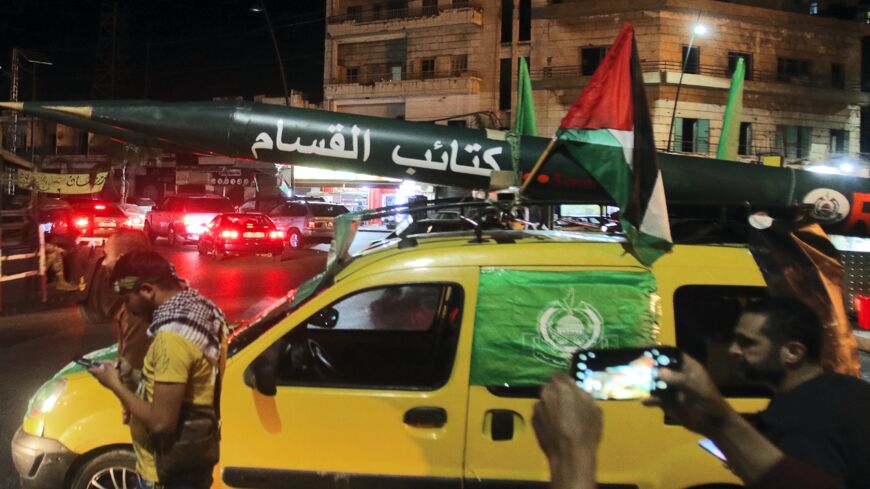 Men parade with a model of a rocket with "Qassam Brigades" (Hamas armed wing) written in Arabic, during a demonstration called by the Palestinian Islamist group Hamas in the southern Lebanese city of Saida late on May 11, 2021. - MAHMOUD ZAYYAT/AFP via Getty Images

Rockets were fired from Lebanon toward Israel Thursday night amid continued Israeli-Palestinian fighting.

The Israel Defense Forces said three rockets were fired from Lebanon and landed in the Mediterranean Sea off the coast of northern Israel. They did not say who was responsible nor did they mention any retaliatory actions.

Hezbollah did not immediately comment on the incident. The Lebanese political and military organization backed by Iran sometimes clashes with Israel on the border and the two fought a major war in 2006. The Lebanese government also did not comment following the news.

Some Lebanese media reports attributed the attack to Palestinian armed groups in the country. A security source told the Lebanese news outlet mtv that “preliminary information indicates that Palestinian factions fired the rockets in the direction of occupied Palestine.” The Daily Star reported that the Lebanese army arrested one Palestinian person in relation to the incident. The rocket was fired from Qlaileh in southern Lebanon, according to mtv.

Palestinian armed groups have a presence in Lebanon, including Fatah, which leads the Palestinian Authority, and Islamist groups. More than 100,000 Palestinian refugees and their descendants live in Lebanon.

The rockets followed several days of intense conflict between the Israeli military and Hamas throughout Israel and the Palestinian territories.