Hayat Tahrir al-Sham leader Abu Mohammed al-Golani has increasingly been seen meeting with tribal elders in Syria’s northwestern province of Idlib, part of efforts to polish his image and that of his group. 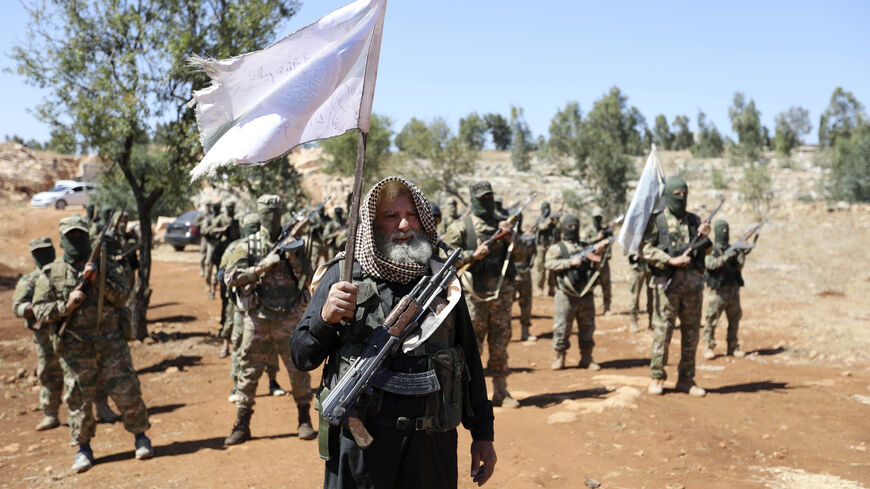 Syrian fighters attend a mock battle in anticipation of an attack by the regime on Idlib province and the surrounding countryside, during a graduation of new Hayat Tahrir al-Sham members at a camp in the countryside of the northern Idlib province on Aug. 14, 2018. - OMAR HAJ KADOUR/AFP via Getty Images

A video circulated on social media on May 17 showing the leader of Hayat Tahrir al-Sham (HTS), Abu Mohammed al-Golani, in a tent meeting with a number of tribal elders in Syria’s northwestern province of Idlib, during a visit on the occasion of Eid al-Fitr. Golani is known for exploiting such occasions for media coverage.

The video shows Golani beginning his speech by saying, “HTS is in the stage of preparing and building institutions in preparation for a major war. At the same time we are advancing toward Damascus, because the Syrian regime is collapsing in light of the deteriorating economic situation, in addition to losing all its support. Even the Russians could not protect the regime.”

Golani told the tribal leaders that HTS is preparing to be an alternative to the regime when it falls. Noting that rebuilding is more difficult than war, he added that HTS wants to solidify ties with the tribes because it depends on them to restore what the Syrian government has destroyed and help HTS regain its previous power.

The spokesperson for the Council of Syrian Tribes and Clans, Mudar Hammad al-Asaad, who resides in Turkey, told Al-Monitor, “All countries and parties including Iran, Russia, the Syrian regime, the Syrian Democratic Forces, the United States, the opposition and Turkey are competing for the tribes' support. Syrian tribes have a large number of young people and control agriculture and natural resources in a vast area of Syrian territory, in addition to having gained political weight by coordinating with all the active forces on the ground. This is why HTS wants the support of the tribes.”

He added, “There is a tribal Shura Council in Idlib that is affiliated with HTS, with which there is constant coordination. This was not the first time that Golani has met with tribal elders and communication channels have remained open. However, neither HTS nor any other party will be able to control the tribes. After suffering the oppression of the Syrian regime, the tribes no longer trust any authority and know that all the regional actors are trying to manipulate them with offers of support.”

Assad noted, “Several tribal elders have said in previous meetings that HTS resorted to threats and intimidation to control the tribes and neutralize those who opposed it. It grants its supporters positions of power.”

Ibrahim Darwish, an activist from the Bani Khalid tribe in Idlib, told Al-Monitor, “The tribal councils that settle internal disputes and Shura councils in the city of Idlib works in coordination with HTS are made up of the tribes of Bani Khalid, al-Naim, Abu Shaban and al-Mawali. The tribes have so far held two meetings with Golani, and did not inform them of the timing of the visit in order to avoid security risks, which made them surprised by the visit.”

Darwish added, “Since these tribes are present in Idlib, they find themselves forced to coordinate and submit to the wishes of HTS, which governs the area. The first time [they met with Golani] back in March, tribal leaders were honoring young men in the cultural center in Idlib when and Golani suddenly entered. On the Eid visit, the leaders were meeting in a guesthouse, and Golani entered unannounced yet again.”

Golani visited camps for the displaced on Eid al-Adha last August and attended meetings with civil figures in the province. Golani is clearly trying to appear as though he's close to the people and invested in their interests. He held a series of secret meetings with media figures who can help polish his image, claiming that he was working to involve everyone and consult them in his decisions.

HTS is also working to rid itself of its terrorist designation by arresting foreign and Arab leaders and members of several militant factions in the area, notably Hurras al-Din. HTS is trying to show the West that it is making radical changes to become more moderate while strengthening its influence in northwestern Syria and limit the role of other militant factions.

Abbas Sharifa, a researcher at Jusoor for Studies in Istanbul, told Al-Monitor Golani’s moves come as part of HTS’ efforts to draw close to the local and foreign communities and improve its image. "The tribe file is sensitive because it is an arena of competition between many parties, as they represent a large portion of society. HTS is seeking the tribes’ support to show the foreign parties that it enjoys popular support in its area of control.”

Sharifa added that because HTS arranged for press coverage, "The goal is not coordination with the tribes, but rather to convey a political message. It seems that HTS planned this meeting in advance, and it is the latest of HTS’ efforts to polish the image of Golani, who aspires to lead the country after turning Idlib into a battlefield where government forces backed by Russian air cover are fighting the Turkish-backed opposition factions deployed in the area. Idlib, 75% of which is controlled by HTS, is witnessing almost daily exchanges of fire … often resulting in casualties in addition to material damages.”