Hayat Tahrir al-Sham is offering young Syrians in the northwestern province of Idlib many incentives to join the militant group's ranks. 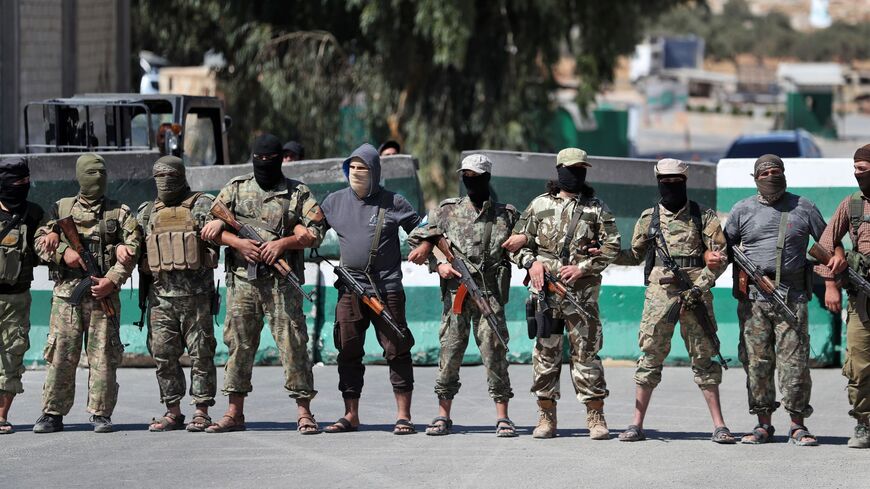 Hayat Tahrir al-Sham fighters block demonstrators from approaching the Bab al-Hawa crossing between Turkey and Syria's northwestern Idlib province during a protest against the Syrian regime and its ally Russia on Sept. 20, 2019. - OMAR HAJ KADOUR/AFP via Getty Images

ALEPPO, Syria — Hayat Tahrir al-Sham continues its efforts to cement its power and military strength in Syria’s northwestern province of Idlib by recruiting more fighters. It has established a military recruitment department with many affiliated divisions across the province that receive young men wishing to join one of the group’s brigades.

The announcement on Telegram included the accounts of eight recruitment units, and each has two contact numbers on WhatsApp and Telegram. The eight units that are part of Hayat Tahrir al-Sham’s Military Recruitment Department are in ​​Atma, Harem, the northern region, the Jericho area, the central region, Sarmada, Jisr al-Shughur and the capital city of Idlib.

Commenting on the establishment of the Military Recruitment Department in Idlib, Wais said via Telegram, “Launching the project of the Military Recruitment Department with its affiliations and volunteering divisions in the liberated areas is an important step to advance and organize military efforts, and it is a clear message that the will to fight persists. Justice and projects are not served and protected except through building armies and battalions. O young Sunni Muslims, hasten to join the ranks of the heroes to fulfill your Sharia duty to expel the oppressor and protect the sanctities.”

Hayat Tahrir al-Sham’s Military Recruitment Department carried out a media campaign to urge young men in Idlib to volunteer by distributing leaflets in a number of areas of Idlib and in the neighboring  western countryside of Aleppo. “Join the heroes of liberation and contact us through the following accounts,” the leaflet read.

The announcements about opening the door to more recruits and establishing a special department for this purpose raises many questions about the motivations behind young Syrians in Idlib who join Hayat Tahrir al-Sham’s ranks. Questions also arise about whether the group's recruitment operations are greater than those of the Free Syrian Army (FSA) factions supported by Turkey and about the purpose behind establishing the Military Recruiting Department.

Abbas Sharifeh, a researcher on jihadi groups at the Jusoor Center for Studies based in Istanbul, told Al-Monitor that Hayat Tahrir al-Sham “is trying to control recruitment operations within an organized institution and written records to avoid accusations of child recruitment, which would embarrass it legally in the case of its classification on the list of terrorism, as the movement is trying to remove its name from that list, improve its image in the West, and present itself as an organization abiding by international law.”

Sharifeh added, “The establishment of a special department for recruitment and its divisions across Idlib will attract greater numbers of recruits, by reaching a wider social segment, since the recruits are scattered across a large number of areas." He said Hayat Tahrir al-Sham "wants to show that it is an organized entity and now has an army that follows modern, organized and clear methods of recruitment.”

Regarding the possibility of Hayat Tahrir al-Sham forcing conscription on young Syrians living in the areas under its control in Idlib, Sharifeh said he did not think the group needs to impose conscription, particularly because of the high population density in the liberated areas "and the absence of battles currently, in addition to the subsequent material cost of such conscription. Besides, it fears resentment and popular rejection facing such a step. I think that recruitment will be voluntary at present.”

Lack of job opportunities and widespread unemployment among young Syrians in Idlib is one of the most important factors that push young men to join armed operations or a faction. Hayat Tahrir al-Sham appears to be the preferred destination for recruits for several reasons, but mainly because its salaries are high compared with those for FSA fighters.

A military official in the FSA’s National Army told Al-Monitor on condition of anonymity that Hayat Tahrir al-Sham “pays its fighters twice the monthly salary of an FSA fighter. Young men want to join [Hayat Tahrir al-Sham] to get a higher salary." The official said Hayat Tahrir al-Sham policy “is based on attracting and recruiting more fighters, while the FSA factions do not want to recruit large numbers, and their recruitment is currently limited due to their limited resources.”