Hayat Tahrir al-Sham presses on with its campaign to weaken Hurras al-Din. 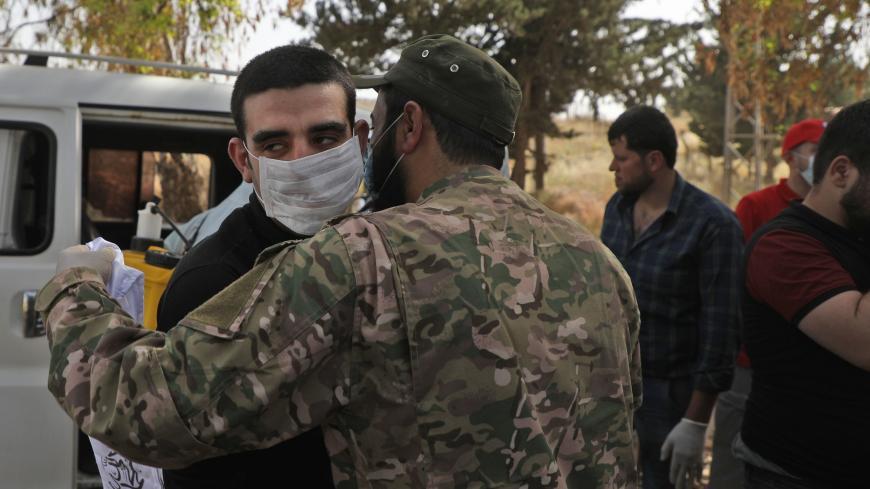 A fighter from Hayat Tahrir al-Sham (L) is welcomed upon his release in a reported prisoner swap deal with Syrian regime forces in the town of Darret Ezza northwest of Aleppo on May 16, 2020. - AAREF WATAD/AFP via Getty Images

ALEPPO, Syria — Hayat Tahrir al-Sham, which controls Syria’s northwestern province of Idlib, this month launched a campaign of wide-scale arrests against prominent leaders and members of Hurras al-Din (Guardians of Religion Organization), which is affiliated with al-Qaeda.

It appears that the arrests against the jihadi organization are a continuation of the security campaign Hayat Tahrir al-Sham launched a while ago to weaken Hurras al-Din and perhaps even eliminate it.

On Feb. 15 in Maarrat Misrin in north Idlib, Hayat Tahrir al-Sham arrested Abu Hreira al-Masri. He is the son of former Hurras al-Din Sharia official Abu Dharr al-Masri, who was killed in an airstrike in west Idlib on Oct. 15, 2020.

On Feb. 10, Hayat Tahrir al-Sham arrested Abu Abdul Rahman al-Ourdouni,  a Sharia leader of Hurras al-Din, at a temporary checkpoint while he drove his car around a residential neighborhood in the center of Jisr al-Shughur in west Idlib. Hayat Tahrir al-Sham also detained a Frenchwoman called Umm Asia with her two children in a raid of her house in Atma in north Idlib. Umm Asia is the wife of jihadi Shamel al-Faransi, a leader of the French jihadi group Furkat-al-Ghuraba in Idlib. Hayat Tahrir al-Sham had arrested Faransi along with the commander of Furkat-al-Ghuraba, Frenchman Omar Omsin, and two other people in August 2020.

Tensions between Hayat Tahrir al-Sham and Hurras al-Din had escalated since December 2019 due to mutual arrests between the two groups. Hayat Tahrir al-Sham has continued its brawl against and encroachment of Jurras al-Din in Idlib; Hurras al-Din is more attractive for extremist figures. It appears that the efforts of Hayat Tahrir al-Sham — which is designated by the US and the UN Security Council as a terrorist group in part because of its former ties with al-Qaeda — are part of the Syrian group's policy to steer away from jihadism and paint itself as a moderate Islamist group and part of the Syrian national opposition. Even its leader, Abu Mohammed al-Golani, was recently interviewed by PBS correspondent Martin Smith in Idlib.

On Feb. 21, Hurras al-Din published a message by senior Sharia leader Sami al-Oraydi; this followed an earlier message released in the wake of a US announcement about its financial reward of up to $5 million for anyone with information about Oraydi.

In his four-page message Feb. 21, Oraydi called for greater cooperation to preserve the unity of Muslims and achieve victory. “Muslims must cooperate, support each other and encourage righteousness and mercy. Muslims must unite in the war against polytheism and they must mobilize all their resources and energy to fight the Americans and the Zionists. They must avoid side battles and rise above minor disputes, while directing their battle against the infidels,” he added.

The new message seems important as it coincides with the weakness of Hurras al-Din in Idlib due to Hayat Tahrir al-Sham’s ongoing security campaign against Hurras al-Din's leaders and officials.

A military leader in the National Front for Liberation (affiliated with the Free Syrian Army in Idlib) told Al-Monitor — on condition of anonymity for of security concerns — that the campaign of arrests by Hayat Tahrir al-Sham against Hurras al-Din leaders shows Hayat Tahrir al-Sham "is still afraid of the organization and wants to weaken it further and scatter its leaders before disintegrating it through its campaigns.”

The military official said, “The recent arrests targeted prominent first-rank figures in the organization, in addition to jihadi figures close to the organization rather than affiliated with it.”

He said, “I expect the campaign of arrests to continue in the coming phase. Even if [Hayat Tahrir al-Sham] could not annihilate the organization, its constant pressure and encroachment will push the remaining leaders to consider escaping outside Idlib. Hurras al-Din is currently weak, and its leaders and members are moving cautiously for fear of arrests or being killed.”

Istanbul-based researcher at the Jusoor Center for Studies, Abbas Sharifeh, told Al-Monitor, “The recently published message by Oraydi is directly linked to the situation of Hurras al-Din in Idlib due to the security pursuits and arrests by [Hayat Tahrir al-Sham] against the organization. Oraydi’s message reflects the weakness of the organization and the fear its leaders have of arrest. Oraydi, who is in hiding, has been taking security precautions and posting written messages to avoid appearing in person.”

Sharifeh added, “The tone of Oraydi’s message seemed tempered, in what appeared to be an indirect attempt" at reconciliation with Hayat Tahrir al-Sham, whose name was not mentioned. "Oraydi said the organization’s priorities do not include engaging in battles with other Islamist groups unless they were fighting apostates. This constituted a direct message to [Hayat Tahrir al-Sham] and its soldiers that Hurras al-Din has no intention of fighting with them.”

Sharifeh said he did not expect Hayat Tahrir al-Sham "to take Oraydi’s message seriously or react positively to it." He said Hayat Tahrir al-Sham will continue its security operations and arrests against the organization in Idlib because "Golani simply does not want any competitors in Idlib, especially from a jihadi current affiliated with al-Qaeda, which it is trying to steer clear of by all means.”