Hayat Tahrir al-Sham, which controls Idlib, is taking advantage of the difficult living conditions of the people to attract more people into its ranks by offering high salaries. 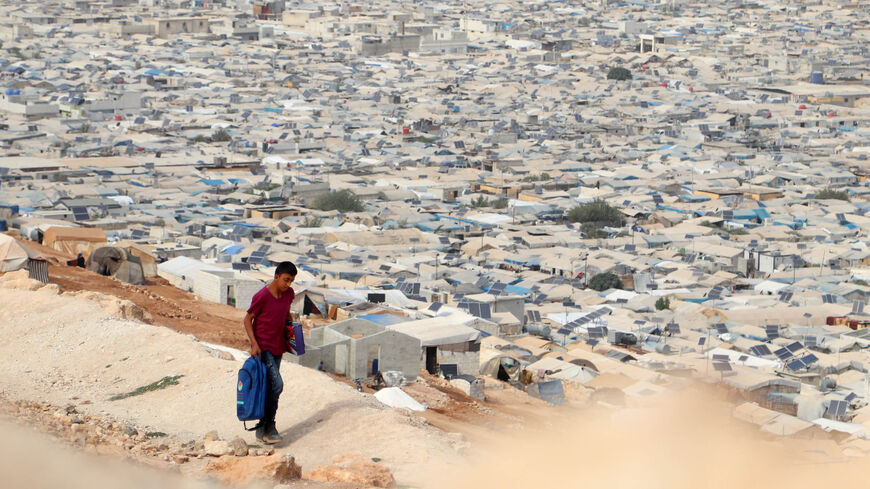 A young displaced Syrian returns from school to an overcrowded camp for the internally displaced near the village of Qah, close to the Turkish border, northwestern Idlib province, Oct. 28, 2020. - Ahmad al-Atrash/AFP via Getty Images

Hayat Tahrir al-Sham (HTS) is still the largest and most dominant faction in Syria’s northwestern province of Idlib, amid its continuous attempts to control other areas to expand its influence, despite the existence of other factions supported by Turkey.

HTS is trying to exploit the poverty of the youth to push them to join its ranks by luring them with a panoply of incentives.

A young man who joined HTS about five months ago told Al-Monitor, “I am 20 years old and I decided to join HTS despite my family’s initial rejection. The fact that I needed money, that I was unemployed and that I lacked any professional experience have all led me to join the group’s ranks. I have friends who joined the group a year ago and they convinced me to follow in their footsteps.”

Asked about the ages of those joining HTS, he replied, “Many youths are joining the group — most are between 18 and 30 years old.”

He said, “What further pushed me to join the group is HTS’ campaign in the streets and during Friday prayers.”

He noted that HTS established recruitment divisions across Atma, Harem, Arihah, the northern and central areas of Idlib province, Sarmada, the provincial capital of Idlib city and Jisr al-Shughur.

He added that HTS pays its members monthly salaries ranging between $100 and $300 depending on the nature of the work, while the salaries of fighters in the Turkish-backed Syrian National Army factions amount to around 600 Turkish liras, i.e., no more than $35 per month.

The high salary, according to him, is what prompted many young people to join the ranks of HTS, which is now exploiting poverty, especially in the camps for the internally displaced, to attract the largest number of young people.

On Jan. 7, HTS’ so-called military recruitment department launched a course titled “Catching up with the heroes,” to attract new members to join its ranks. The course was only open to married men who hold school or university degrees, and was divided into two 30-day courses — one for Sharia and the other for military classes.

Meanwhile, many civilians accuse HTS of tightening the noose on them. A resident from Atma camp for the displaced in the northern countryside of Idlib told Al-Monitor that HTS deliberately causes difficult living conditions for civilians, by restricting fuel and electricity, and imposing fees at crossings, and even on food and drinks.

According to him, HTS has yet to impose compulsory recruitment, although this is being done indirectly through its media propaganda, religious lessons at mosques, Friday sermons and fundraising campaigns organized for fighters at the front.

He noted that poverty, especially among the youth, is prompting many to join HTS in order to help provide for their families.

Ugarit News, an online Syrian rebel news outlet, had reported that HTS imposed a tax of $30 on each car loaded with foodstuffs entering its areas of control through the land crossings.

HTS remains on the list of terrorist organizations of the United Nations Security Council and several countries, while Russia, the Syrian government’s main backer, is using the group’s terrorist designation as an excuse to escalate its attacks in northwestern Syria.