Gazans find themselves homeless with no safe place to go as Israel continues to pummel the coastal enclave with heavy artillery shells and airstrikes, razing neighborhoods to the ground and destroying the already poor infrastructure. 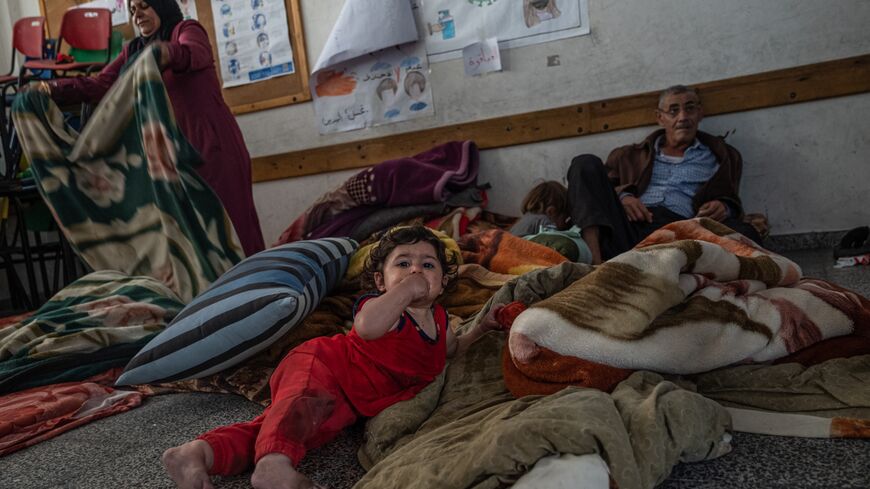 Palestinian families are seen in school run by the UN agency for Palestinian refugees in Gaza City, Gaza, following Israeli strikes on the city of Beit Hanoun in northern Gaza on May 14, 2021. - Fatima Shbair/Getty Images

GAZA CITY, Gaza Strip — Israeli attacks on the Gaza Strip intensified Friday as the military operation entered its fifth day. Defenseless civilians in populated areas with already rundown infrastructure lacking most necessities of life continue to suffer under heavy bombing by Israel, particularly at night when the shelling is most intense.

The attacks continued on Saturday, including an airstrike that destroyed a high-rise building in Gaza City that housed the offices of several media outlets, among them Al Jazeera and the Associated Press. Tenants evacuated after receiving a warning just before the strike decimated the 12 floor building.

On the fourth day of the escalation, May 13, the Israeli army deployed artillery batteries, which along with the military jets have been alternating in shelling several areas and razing houses without any warning to civilians. Attacks from the ground, sea and air continued to escalate with total disregard for the rights of civilians in war, while buildings and public facilities in the Gaza Strip lack shelters.

As the military offensive intensified at midnight May 13, the residents of northern Gaza were hit by a barrage of missiles attacking them from all sides, terrorizing citizens after a long day of heavy artillery shelling and airstrikes.

There is no safe place for these civilians who do not really have any place to hide from the violent attacks which also halted the movement of ambulances and paramedics.

The relentless Israeli air bombardment continued amid total darkness due to power cuts, the crying of children and the wailing of women and men hunkering down against walls, barely able to breathe, almost suffocating in the artillery smoke and the smell of gunpowder.

When the bombing came to a halt for fleeting moments, Al-Monitor witnessed dozens of families fleeing their homes in search of refuge in the center of the city. But no place seemed safe across Gaza.

Al-Monitor managed to speak to some civilians who were forced out of their homes to escape death.

S.D., who asked to be identified only by her initials, is a Palestinian mother of two, 6-year-old Salma and baby Youssef. Her apartment was destroyed during the 2014 Israeli war on Gaza, which prompted her husband and her to hop from one rented apartment to another until they built their own home two years ago.

“On Thursday evening, I heard the rumbling sound of huge and successive explosions. The house was shaking and the doors slamming, setting my kids off crying with panic,” she told Al-Monitor.

“I did not know what to do. I was terrified and barely able to stand on my feet. My husband was working a late shift. I carried my children and exited the apartment to find my in-laws and my husband’s siblings taking refuge in the staircase on the bottom floor. I clasped my arms tightly around my children and hunkered down against the wall. Everyone was in a state of panic,” she added.

“Some of my family members were praying, others could not help but cry. The children too. We knew there was no safe place in Gaza. The jets already bombed the roads. No cars could pass. There was no electricity. We did not know what to do. We remained crouched in fear until the shelling stopped with the crack of dawn. This is when I headed to my parents’ house in the city center. I pray to God that I’ll be able to return home soon,” she said.

Aseel al-Gherbawi (the author's sister), a 20-year-old student at the Faculty of Medicine at  Al-Azhar University, Gaza, told Al-Monitor, “It was a violent night like nothing I had ever witnessed in my life. All my life I had one dream, to become a doctor and help save my people’s children. That night, I only had one wish. To make it out of the house alive with the break of day.”

“The shelling was relentless. The sky blood-red around us. I sat in a corner away from the windows and the doors lest they exploded in my face. I read the Quran. I prayed. My father asked us to gather our identification papers, pack a few things and get ready to leave as soon as the shelling stopped,” she said.

“I rushed to get my university books and papers. I saw my young brothers packing their Eid clothes to wear them once the war is over. They cried and screamed frantically with every shell. I hugged them tightly. I cried. But I reassured them that this will be over soon,” Gherbawi added.

“We rushed to take refuge in the stairwell from the rockets skittering above our heads. At that moment, we did not think of our house or our dreams. Our only wish was to get out of there as soon as possible. After two hours of relentless bombing, we went running into the streets joining our neighbors. It was the 1967 Naksa Day all over again,” she added, in reference to the displacement that accompanied Israel's victory in the 1967 Arab-Israeli war.

A 55 year-old resident who asked to be identified by Umm Mohammad told Al-Monitor, “I live with my husband, sons and 10 members of my family in a house west of Jabaliya camp. On Thursday, the house next to us was bombed. Ours was partially damaged and water was cut off. The sewage system was damaged, too. The acrid smell of smoke and gunpowder filled the house. Yet we stayed. At midnight, the Israeli shells pounded us for 40 minutes nonstop. We had no other choice but to leave if we wanted to stay alive. Our only hope is to be able to return once this military aggression is over.”

She continued, "I thought that midnight on May 13 would be the only difficult one, but every night has been difficult for all areas in Gaza. Last night, midnight on May 14, before going to sleep, I did a set of prayers in anticipation of any emergency, and I went to sleep peeking at the sky, [asking myself] is it red or not? My body feels as if the house is shaking even without the rocket bursts. I sat thinking, 'how long will the war continue and why is this happening to these innocent children sleeping, afraid and putting cotton in their ears for fear of the sudden sound of rockets without any warning.' Until 2 am heavy missile bursts shook the windows and doors, everyone screaming at home, old and young. I went to watch the live news channels to follow the latest news, but because of the power outage in the area I was unable to. I found headphones and started following the news on the phone to see what happened in the last few hours, [it was] as if the 2008 war was repeating. I was surprised to hear that the Qalibo Mosque was completely destroyed and five houses were bombed in the north of the strip ... Is bombing the mosque, killing innocent children and terrorizing the civilian population part of Israel's goals?"

Al-Monitor also spoke with a Civil Defense member who said Thursday night was “extremely violent. We have not seen anything like it before. The shells were huge. We could not reach the affected areas under the heavy bombing; 160 Israeli jets shelled north of Gaza, razing buildings to the ground, destroying roads. We could not reach the demolished house to pull people from under the rubble.”

He added, "We are calling on the international community and international organizations to bring our cities ambulances. The number of those killed in the Gaza Strip has risen to 139 since the start of the Israeli bombing, including 39 children and 22 women."

A Palestinian paramedic told Al-Monitor that the massive destruction of the Israeli military attack greatly damaged the road networks. “It took us ages to reach the wounded and evacuate the defenseless civilians. Several areas were hit in the relentless attack that lasted for 40 minutes, preventing us from moving quickly,” he said.