Amid increasing scrutiny of its human rights practices and skepticism by activists, an Egyptian government committee offers its own approach 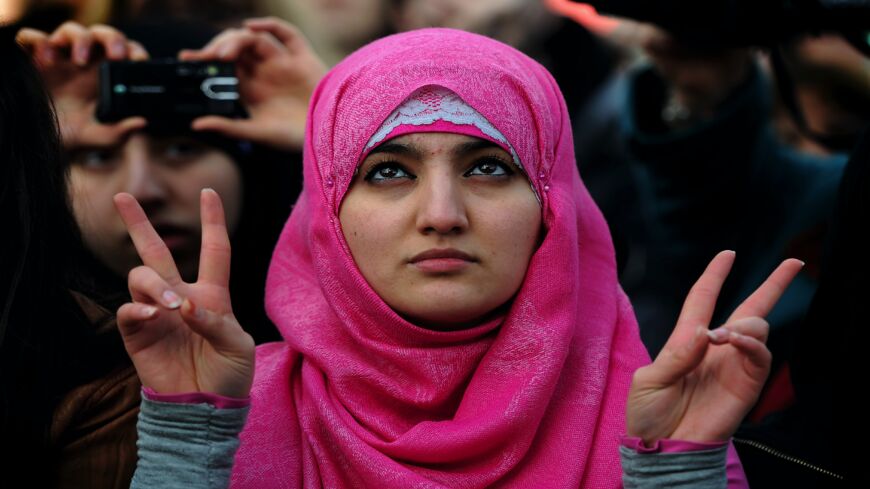 A protestor makes the "victory sign" with her hands during a global solidarity demonstration for political change in Egypt in Trafalgar Square, London, on Feb. 12, 2011. The event was organized by Amnesty International and the ITUC, Human Rights Watch, the NUS, the Cairo Institute for Human Rights Studies, the Egyptian Initiative for Personal Rights, the Euro-Mediterranean Human Rights Network and the Arab Program for Human Rights Activists. - CARL DE SOUZA/AFP via Getty Images

On May 8, Egypt’s Permanent Supreme Committee for Human Rights, a body established in 2018 by Prime Minister Mustafa Madbouly, held a meeting with representatives of a number of state-aligned civil society groups to discuss an ambitious and equally dubious five-year national government strategy for human rights. The document, which was also reviewed the day after with the Committee for Human Rights of Egypt’s House of Representatives, will be the first of its kind and will serve as a guide for the government on how to improve human rights. It is set to go into effect by mid-2021.

“The five-year strategy is important [in order to] review and adopt a broader [approach to human rights], as they may develop over time,” parliament member Tarek Radwan, head of the House of Representatives’ Human Rights Committee, told Al-Monitor. “Human rights matters develop from time to time, and that is why it needs revision,” he added.

The government strategy, which should be ultimately approved by the prime minister, reflects the attempts of Egyptian authorities to adopt a broad and largely vague approach to human rights that, given its comprehensive aspiration, deliberately gives little weight to the specific abuses it is systematically accused of and which it usually downplays.

After more than a year on standby, the Permanent Supreme Committee for Human Rights began working at the beginning of 2020 following the country’s third Universal Periodic Review (UPR) prepared by the UN Human Rights Council (UNHRC) in November 2019. In this vein, in addition to drafting Egypt’s first government strategy for human rights, the committee is also in charge of preparing Egypt’s file for the next UPR, which will take place in 2024, following up on the implementation of the accepted recommendations of the previous one, and suggesting necessary solutions for its adoption. Egypt regards both processes as interrelated, and the national document for human rights will be based on four main pillars, including political and civil, social, cultural and economic rights.

All of them, however, will be reported in line with the accepted recommendations of the last UPR. In March 2020, Egypt accepted 294 recommendations out of the 372 made to improve its record on a range of issues, and it left behind recommendations that human rights groups considered “critically important,” such as the death penalty, extrajudicial killings, torture, forced disappearances and restrictions on freedom of assembly.

Last March, 31 Western countries, including the United States, delivered a joint declaration to the UNHRC expressing for the first time since 2014 a deep concern about the trajectory of human rights in Egypt. The statement, much shorter and more categorical than the UPR, drew particular attention again to abuses under the terrorism legislation, multiple abuses of due process, the restrictions on freedom of expression and the right to peaceful assembly, as well as the constrained space for civil society and political opposition.

Despite this, five Egyptian ministers participated last April in a conference organized by the Egyptian Center for Strategic Studies, a state-aligned think tank, to tackle the impact of the pandemic on human rights, also adopting a broad approach to the concept at the expense of the previous issues. The ministers that attended included the ministers of Planning and Economic Development, Health, International Cooperation, Education and Social Solidarity. Others, such as the ministers of Interior and Defense, were not present.

The Permanent Supreme Committee for Human Rights has also held what it calls an open dialogue with civil society organizations during the drafting process of the government strategy, the last of which took place on May 8. The government has held similar sessions before to discuss amendments to the NGO law or the 2019 constitutional amendments, but it has been criticized for failing to welcome some of its most prestigious human rights groups. Still, some of the organizations that have participated have praised the decision and are trying to build consensus on specific issues where authorities have been less receptive.

“I am very optimistic,” said Alaa Shalaby, secretary-general at Arab Organization for Human Rights, one of the groups that has been invited to the dialogue sessions, to Al-Monitor. “Maybe the tough part was about the penal code, strengthening guarantees and fair trial. We have worked [on this] for many years, and now we find this in the strategy,” he added, praising the areas concerning social, cultural and economic rights.

Some of the most prestigious human rights organizations in Egypt, however, are less optimistic. And in light of the session on May 8, five leading human rights groups that were not invited released a list of seven necessary, clear and urgent measures to stop the “unprecedented erosion of human rights that Egypt has witnessed over the past years.” The groups said the list represents “the minimum to gauge meaningful improvement” and “only includes immediate measures that can [be implemented] tomorrow morning.”

“The timing was very important given that the government, through the Ministry of Foreign Affairs, said they are about to adopt a national strategy for human rights,” Mohamed Lotfy, executive director of the Egyptian Commission for Rights and Freedoms, one of the signing organizations, told Al-Monitor. “If it fulfills these minimum requirements, it is an improvement. And if it does not, it is more of the same,” he added, noting that until May 11 over 50 organizations had also supported the declaration.

The seven measures include the liberation of political prisoners of all backgrounds; the halt of “endless” pre-trial detentions; the end of the state of emergency in force since 2017; and the halt of all executions in political and criminal cases until a presidential pardon board reviews them. It also included the end of criminal prosecutions of human rights activists and the closure of the so-called Foreign Funding Case targeting civil society groups; the withdrawal of the draft personal status law and the launching of a debate on a new family law; and a halt to blocking websites.

So far, it is still unclear if any of the measures will be addressed in the national strategy. But both the extension of remand detention and the situation of prisoners appear to be on the agenda, according to Cairo24 coverage. Khaled Okasha, general manager of the Egyptian Center for Strategic Studies, also raised the issue of endless remand detention during the conference held in April by his organization and attended by Al-Monitor.

“[Pre-trial detention] is one of the major demands that we have been addressing,” Shalaby said. “It is part of our conversation with the government whenever we have the chance, and during the consultations about the national strategy, no session went by without mentioning this,” he added. Shalaby also mentioned that proof of the authorities’ willingness to address this issue is that hundreds of people who remained in pre-trial detention have been released over the last few months.

The fate of the other demands is even less clear. “Because we have not seen [the draft of the strategy] and we are not invited to participate in its drafting, it was important for us to tell everybody, including the government and observers, that [anything] less than those seven steps cannot be considered an improvement,” Lotfy said. “That was the whole point.”