Turkey’s service passport scandal may be more costly than imagined. On the domestic front, the case is one more sign that organized crime fuels corruption. In the international arena, Turkey is expected to encounter more embarrassment and court cases for smugglers. 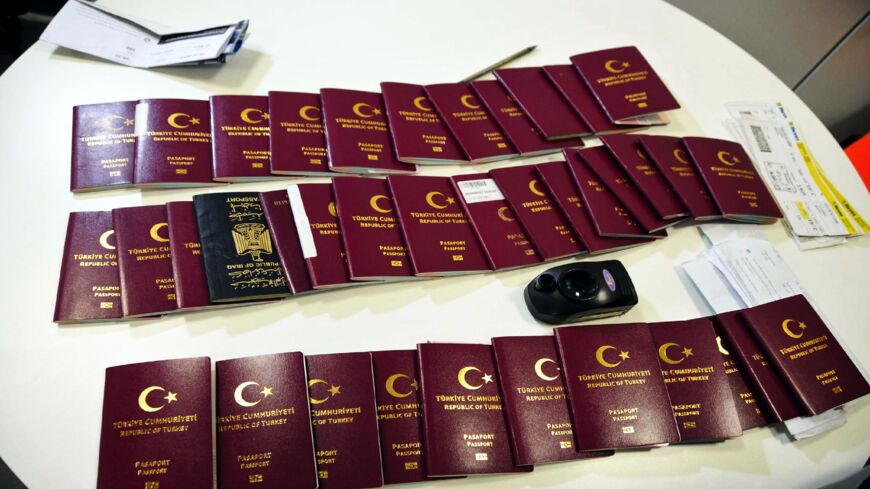 Fake passports and travel documents are displayed on a table for the press on Dec. 19, 2019, at the Istanbul airport in Turkey. - IBRAHIM YILDIZ/Demiroren News Agency (DHA)/AFP via Getty Images

In April, what has become known as the “grey passport scandal” raised a new round of questions as to the extent of official corruption in Turkey. Grey (service) passports are temporary travel documents provided for those who travel abroad to represent Turkey. Most countries know the grey passport holder is on official duty and will return shortly.

The scandal revealed that these passports were sold to people whose main goal was to seek refuge in Western Europe. After weeks of news, Interior Minister Suleyman Soylu informed the public that since 2018, in 19 different cities municipal governments have organized trips to Europe where “804 people did not return to Turkey after their passports expired.” Soylu also said investigations are being launched at different levels and municipal governments are banned from applying for grey passports.

The scale of the scandal, however, could be larger than Soylu’s initial figures. Some of the escapees spoke to the press on the condition of anonymity. Al-Monitor spoke with three sources in different EU cities. They all confirmed they entered the Schengen zone with grey passports but then had to hand them back to the tour organizers. Their accounts are in line with what other journalists in Europe and in Turkey have reported as well. The passports were returned to Turkey and most likely stamped. A senior bureaucrat who spoke on the condition of anonymity explained that “if the grey passports of thousands of people who were traveling as a part of a cultural tour went missing, the scandal could not have continued for four to five years.”

One of the escapees who had paid over 8,000 euros in late 2018 told Al-Monitor, “I left Turkey because I am a draft dodger and a Kurd. I was looking for ways to be smuggled out of the country. Then I heard in Bingol (an eastern province in Turkey) there is a place where you can pay, and you will travel like a government employee. Initially, I didn't even know what a grey passport means, and I thought this must be a gimmick. However, I checked, and I spoke with four different Kurds who left Turkey using this method. Our trip was originally organized as a religious cultural tour. But later we learned that Diyanet (the Religious Affairs Directorate) was under investigation, so they linked us to a different [nongovernmental organization].”

Although individual stories differ, there are common points. These grey passports were real, which means there is some degree of cooperation with different agencies of the Interior Ministry responsible for vetting applicants and providing passports. Actors from Justice and Development Party (AKP) municipalities were also involved. Some of these officials spoke candidly that tour organizers gave them gifts and that they thought they were doing “a good deed” by sending troublemakers out of the country.

There have been allegations that criminals and those possibly affiliated with the Kurdistan Workers Party (PKK) and Gulen movement also used this method. Opposition parties sought an investigation at the Turkish parliament, but AKP and Nationalist Movement Party votes rejected it. Although AKP officials have claimed that some of the opposition municipalities were also involved in this scandal, there was no further information. The ruling parties’ rejection of a parliamentary investigation inquiry also raises a red flag that the human trafficking scheme on real Turkish service passports might involve high level officials. As expected, pro-AKP media reports initially blamed the scandal on private tourism agencies.

What are the consequences of this human trafficking scheme involving AKP municipalities, government agencies, the Interior Ministry and NGOs?

First, such a large-scale human trafficking scheme conducted over at least three years with different municipalities as a lucrative crime taints Turkey’s reputation globally. It harms all Turkish passport holders, and over time it would mean Turkish government-issued passports will be subjected to further scrutiny and maybe further restrictions.

In Turkey, those who insult the passport are subject to prosecution. That was the official claim behind the arrest of two TikTok users in Turkey who made a satirical video to show their frustration over the pandemic travel restrictions. If the "honor" of the Turkish passport can be harmed by a 30-second video, imagine how much damage the grey passport scandal must have caused.

Second, the question that is not allowed to be asked in Turkey is how many government officials, at what agencies and ranks, are involved? The municipalities sought the passports on the demands of NGOs, and they are being investigated. But how about the agencies that produced the passports? How were people who could not even get a regular passport due to their troubles with law enforcement given service passports?

There have been some critical questions by opposition lawmakers. One was about two Turkish diplomats accredited to Germany being recalled to Ankara after they sent a memo raising a red flag about grey passports being involved in human trafficking. Lawmakers asked why these diplomats were penalized rather than rewarded after their revelation? Another report exposed a government employee who was working for the immigration directorate escaped to the Netherlands using a grey passport.

Ryan Gingeras, a professor of national security affairs at the Naval Postgraduate School in Monterey, told Al-Monitor, “The real question is if there was an organized effort to profit off the production of grey passports and under whose initiative. I would not necessarily say that it is evidence of a mafia state per se. Depending on the scope, it could be symptomatic of long-term problems in the Turkish administrative system: clientelism, the lack of oversight, poor provincial governance. The conceit of course is that the AKP came to power 20 years with the promise of a "clean hands" approach toward government, with a heavy emphasis on transparency and competency. All that has long gone out the window.”

Did senior officials know about this scheme and turn a blind eye, or were they actively profiting from this? Were they unaware of the large-scale operation? The affirmative answer to either of these questions would indicate significant problems for the credibility and health of the state institutions.

Last is the fact that European attempts to appease Turkish President Recep Tayyip Erdogan for immigration control might not be as effective as they had hoped. Since the start of the Syrian civil war, pundits have observed Ankara using the refugee card against the EU to get its wishes. If the scale of this human trafficking proves to be connected to high-level Turkish officials, it might mean the EU has been paying a higher price tag than acknowledged so far. Germany has started investigations into the allegations and some 500 possible suspects in the country.