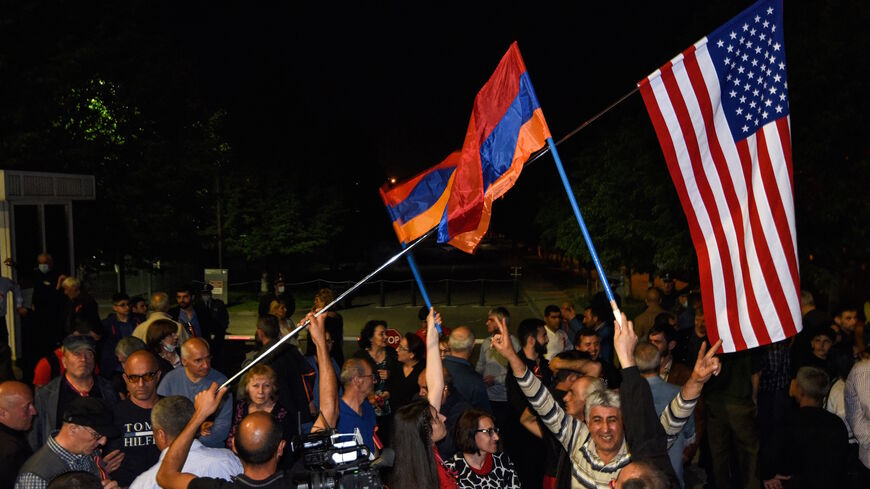 People wave Armenian and US flags in front of the US embassy in Yerevan after US President recognized the 1915 killings of Armenians by Ottoman forces as genocide, on April 24, 2021. - KAREN MINASYAN/AFP via Getty Images

Turkey reacted angrily to President Joe Biden’s widely anticipated use of the term genocide in a formal statement to mark the 106th anniversary on April 24 of the mass extermination of more than a million Ottoman Armenians in 1915. Turkish Foreign Minister Mevlut Cavusoglu took to Twitter to air his displeasure. “Words cannot change or rewrite history. We have nothing to learn from anybody on our own past. Political opportunism is the greatest betrayal to peace and justice. We entirely reject this statement based solely on populism,” he wrote.

The Turkish foreign ministry accused the United States in a statement of distorting historical facts and said Biden had opened “a deep wound that undermines our mutual trust and friendship.” The ministry called on the US president “to correct this grave mistake.”

But there were no immediate threats of retaliation. The US ambassador to Ankara, David Satterfield, has not been summoned to the foreign ministry as of yet, nor has Turkey’s new man in Washington, Murat Mercan, been ordered to return to Ankara “for consultations.”

Turkey has spent decades and millions of lobbying dollars to prevent the US Congress and the president from joining most credible historians in labeling the tragedy of 1915 a genocide. The battle in Congress was lost in 2019 and Biden today became the first US president to use the term in a formal statement to mark the anniversary. “One and a half million Armenians were deported, massacred, or marched to their deaths in a campaign of extermination,” Biden said. “We remember the lives of all those who died in the Ottoman-era Armenian genocide and recommit ourselves to preventing such an atrocity from ever again occurring.”

Biden’s statement came a day after his first phone call as president to Turkish President Recep Tayyip Erdogan, in which he gave him advance warning of the bomb he was about to drop, according to officials familiar with the call cited by Bloomberg.

Turkey’s relations with the United States are already at a historic low over a number of thorny issues, most notably Ankara’s acquisition of Russian S-400 missiles which Washington says poses a threat to NATO aircraft. Turkey has been sanctioned by Congress under the Countering America’s Adversaries Through Sanctions Act and kicked out of a consortium to produce new generation F-35 fighter jets. Turkey’s loss as a result of no longer being involved in manufacturing parts for the jets are estimated at between $9-11 billion over the life of the program.

Erdogan’s critics blame his aggressive foreign policy, which has alienated many of Turkey’s traditional allies including Israel, for today’s statement. A spokesman for the main opposition Republican People’s Party (CHP), Faik Oztrak, condemned Biden’s words today, calling these a historical error that would negatively impact Turkish-US ties as well as reconciliation between Turkey and Armenia. “The hostile statements being made against Turkey and the adverse decisions being taken against our country are an abject example of where [the ruling Justice and Development Party’s] short-sighted foreign policy has brought Turkey,” he added.

Given Turkey’s growing economic vulnerability and diplomatic isolation, the conventional wisdom is that Erdogan, who has not commented on the Biden statement so far, will not further escalate with Washington. Erdogan is well aware, that “although defying the US plays well with his nationalist support base, sustained bilateral tension will deal another blow to Turkey’s already frail economy,” said Wolfango Piccoli, co-founder of Teneo, a risk consultancy, in a research note to clients. “The recognition of the Armenian Genocide clearly signals that Washington’s previous willingness to make concessions to Erdogan because of Turkey’s NATO membership is now gone,” he added.