Provided through the World Health Organization's COVAX program, the 53,800 AstraZeneca doses will go first to health care workers and first responders in the rebel-held territory. 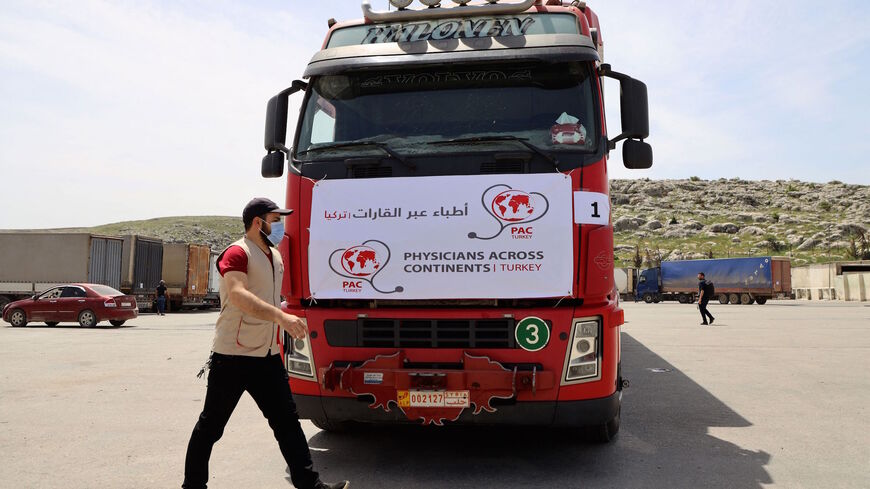 The first shipment of coronavirus vaccines has arrived in Idlib province, the northwestern rebel enclave home to millions of impoverished Syrians.

The 53,800 AstraZeneca doses were provided through COVAX, the World Health Organization's global initiative to bring vaccinations to poorer countries. Over the next year, COVAX is scheduled to provide the Idlib region with 1.5 million vaccines.

According to Agence France-Presse, around noon on Wednesday, a truck carrying the vaccines crossed into Idlib from the Bab al-Hawa crossing on the Turkish border. From there, the doses were unloaded and brought to a storage center where they could be kept cold.

Health workers and first responders are in the first group to be vaccinated, followed by the elderly. The Idlib region’s health department told the news agency that the three-week-long vaccination drive is scheduled to begin early next month.

A total of 912,000 doses have been allocated for the first stage of vaccinations in the regime-controlled and Kurdish-run parts of Syria. Across Syria, WHO hopes to administer vaccines to nearly 20% of the population by the end of the year.

Northwest Syria has recorded more than 21,000 cases and over 640 deaths from the virus since July, although limited testing in the region means the actual case count is likely much higher.

Syria’s last opposition stronghold is still reeling from multiple government offensives in recent years. Most of Idlib's 4 million residents are displaced, with many having found refuge in overcrowded displacement camps where social distancing and safe hygiene is virtually impossible.

An air and ground campaign by Russian-backed government forces last year forced 1 million people to flee their homes before a cease-fire struck by Turkey and Russia paused the hostilities in March 2020. The fighting destroyed the region’s health infrastructure, and those doctors who still remain in Idlib have few resources.

Last month, Syrian government forces targeted a hospital in western Aleppo, killing a child and several other civilians. The New York-based Physicians for Human Rights has documented 598 attacks on at least 350 separate facilities during Syria’s war, 90% of which the organization says are attributable to the government and its allies.