A US-based group of doctors conducted a detailed assessment of the region’s health sector in both Kurdish and rebel territory. 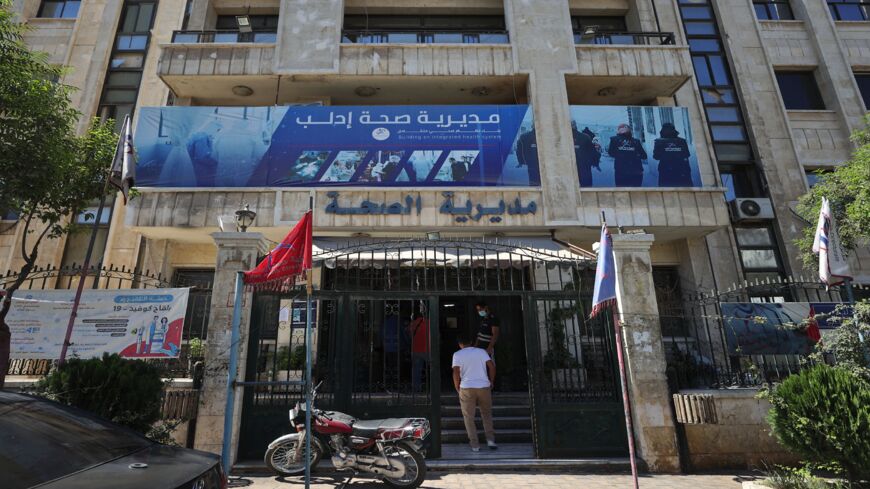 A picture shows the entrance to the Directorate of Health in the rebel-held northwestern Syrian city of Idlib on Sept. 13, 2021. - OMAR HAJ KADOUR/AFP via Getty Images

An American nonprofit organization has warned that health care in northern Syria is experiencing severe difficulties.

The report noted the continued effects of the Syrian civil war on health care in rebel and Kurdish territory. Syrian government forces backed by Russia are seeking to retake the Idlib province from rebel groups. Hayat Tahrir al-Sham, which is linked to al-Qaeda, is the major rebel group in Idlib. The Islamic State also continues to attack the SDF and Syrian government troops in eastern Syria. The SDF also sometimes clash with Turkish-backed Free Syrian Army groups.

The doctors pointed to the Jabal al-Zawiya district in Idlib as an example of violence’s effect on the health care system. Health workers and nongovernmental organizations began to flee in 2018 due to security concerns. In September, Jabal al-Zawiya’s last remaining medical center was destroyed after an attack launched from territory controlled by the Syrian government and the SDF, per the report.

The health issues in northern Syria go beyond the direct effects of the fighting. Though northeast Syria is relatively safer than rebel territory, the autonomous region actually has major medical supply issues. The United Nations closed the al-Yarubiya crossing between Iraq and northeast Syria in 2020 amid pressure from Russia. This leaves the Bab al-Hawa crossing between Turkey and Syrian rebel territory as the only route to deliver aid to parts of Syria not controlled by Damascus.

Transporting aid to northeast Syria via rebel territory poses several challenges, according to a Syrian doctor who co-authored the report.

“There are security concerns related to transferring supplies across different areas of control, with various armed groups controlling checkpoints, which puts this essential medical aid at higher risk of being hijacked,” Dr. Houssam al-Nahhas told Al-Monitor.

Nahhas added that delivering aid to rural areas in the northeast is “logistically challenging,” and delays in aid deliveries are particularly concerning for medicine that must be stored at cold temperatures, including COVID-19 vaccines and insulin. Humanitarian groups also primarily operate in displaced people camps, meaning that nondisplaced populations have relatively few resources, according to the doctor.

There is also an economic cost to cross-line aid delivery between rebel and Kurdish territory.

“Transportation of supplies across the north from Bab al-Hawa would inflate the cost of such supplies,” said Nahhas. “This increase in the cost can be attributable to transportation fees imposed by local authorities and the high price of fuel.”

In rebel territory, some services are unaffordable for the majority of the population. In June 2021, the average cost of a one-way trip to the nearest surgical center from al-Atareb in northern Aleppo was $25. This is 17 times the average daily income in the region, according to the report.

Coordination within rebel territory has also hurt the health care system. In the northwest, the Idlib Health Directorate oversees health care in the province and is linked to the Syrian Interim Government opposition group. The Hayat Tahrir al-Sham-backed Salvation Government also has a health ministry, however. The report noted a “lack of coordination” between the two overlapping entities, leading to the health sector being “disrupted.”

COVID-19 is also a concern throughout Syria at the start of 2022. Syria as a whole has one of the lowest vaccination rates in the world. The issue goes beyond the supply of vaccine doses, however.

“The fragmentation of the health systems makes it hard to track case counts comprehensively,” said Nahhas. “Vaccine hesitancy and apathy among local communities toward COVID further worsen the situation.”

The report also noted a diversion of resources away from nonvirus-related health services in northern Syria.

Physicians for Human Rights is not alone in its bleak assessment. Last month, Doctors Without Borders warned that displaced people in northwest Syria were at risk of contracting respiratory diseases due to harsh winter conditions in the camps, including unsafe heating methods in tents.

On Jan. 11, the UN Security Council extended the mandate for the Bab al-Hawa crossing for another six months. The al-Yarubiya crossing will remain closed for the foreseeable future.