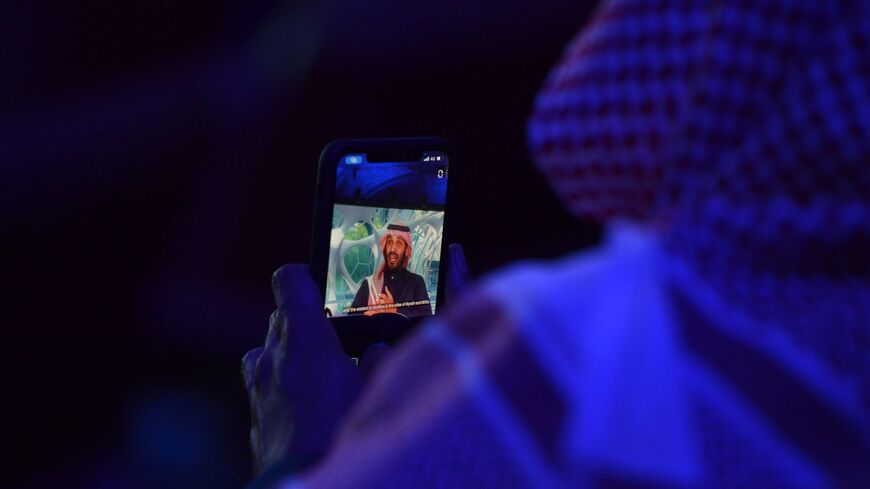 A man watches on his phone as Saudi Crown Prince Mohammed bin Salman speaks during the Future Investment Initiative conference in a virtual session in the capital Riyadh, Jan. 28, 2021. - FAYEZ NURELDINE/AFP via Getty Images

Saudi Arabia’s crown prince said his country is aiming for a “good and positive relationship” with its archrival Iran more than five years after the two countries cut ties.

The regional powerhouses severed relations in 2016 after Saudi Arabia’s execution of a prominent Shiite Muslim cleric was met with violent protests at Saudi diplomatic facilities in Iran. Tensions between Shiite Iran and Saudi Arabia’s Sunni monarchy have continued, with the two countries fighting in proxy wars across the Middle East.

“Iran is a neighboring country, and all we aspire for is a good and special relationship with Iran,” Crown Prince Mohammed bin Salman said in a TV interview broadcast on Tuesday.

“We do not want Iran’s situation to be difficult. On the contrary, we want Iran to grow … and to push the region and the world toward prosperity,” said the crown prince.

Saudi Arabia’s de facto ruler added that he hopes to “build a good and positive relationship with Iran that would benefit everyone.”

His comments follow reports of direct talks in Baghdad between senior Saudi and Iranian officials. The Financial Times reported that the first round of talks, which were reportedly mediated by Iraqi Prime Minister Mustafa al-Kadhimi, took place in the Iraqi capital on April 9.

Bin Salman did not address the reported Iran talks during the 90-minute interview but said his country was working to address Tehran’s malign activities.

"Our problem is with Iran's negative behavior, from its nuclear program to its support for outlaw militias in the region or its firing of ballistic missiles," he said. "We are working with our regional and global partners to find solutions to these problems and we hope to overcome them for good relations that benefit everyone."

Saudi Arabia and Iran are on opposite sides of Yemen’s civil war, with Riyadh leading a Sunni Arab military coalition against the Iran-aligned Houthis. In recent months, the rebels have increased their missile and armed drone attacks on southern Saudi Arabia.

On the Houthis, who rejected a US-backed cease-fire proposal last month, the crown prince said that Saudi Arabia "will not accept the presence of an outlaw militia on its borders” and urged the group to accept a truce.

He also commented on the Saudi government’s relationship with the administration of US President Joe Biden. In February the United States cut off support for the Saudi-led coalition in Yemen and released an intelligence report assessing bin Salman was responsible for the murder of journalist Jamal Khashoggi. The White House is also seeking to rejoin the Iran nuclear agreement, which Riyadh strongly opposed in 2015.

“We are more than 90% in agreement with the Biden administration when it comes to Saudi and US interests, and we are working to strengthen these interests," he said. "There is no doubt that the United States is a strategic partner."