The Syrian government has reopened crossings between the areas it controls and those held by Kurdish-led forces in northeast Syria in exchange for oil shipments. 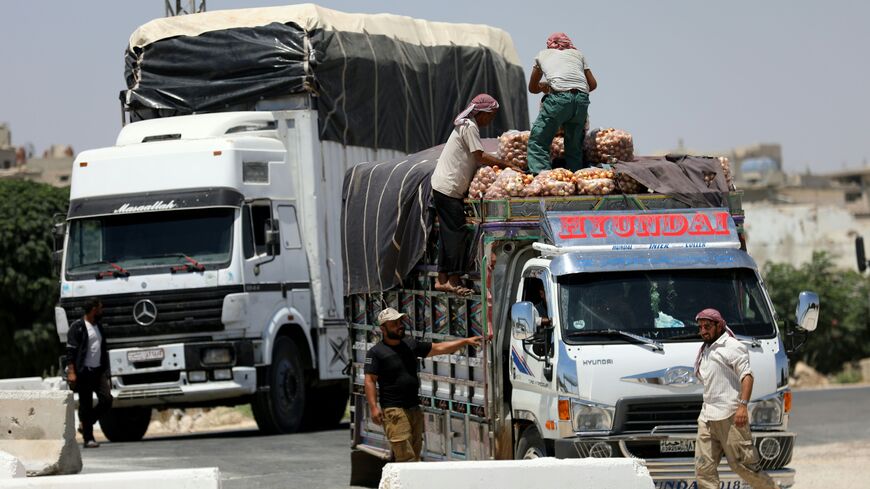 Trucks transport merchandise at the jihadi-held Morek checkpoint between the Syrian provinces of Idlib and Hama on July 18, 2018. - OMAR HAJ KADOUR/AFP via Getty Images

The Syrian government closed the al-Tabqa, al-Hawra and al-Sabkha crossings in the countryside of Raqqa on March 21. The closure stopped civilians and commercial trucks from passing between government-controlled areas in northeast Syria and those held by the Syrian Democratic Forces and led to an increase in the prices of foodstuffs, building materials, medicines and medical equipment in the SDF-controlled areas.

The closures appear to be intended to pressure the SDF to allow more fuel into regime-controlled areas that are in a stifling fuel crisis, as most oil wells are located in the area are under the control of the SDF.

On April 4, the crossings were reopened after the SDF agreed to supply oil to the regime-held areas. In return, the government agreed to allow the importation of food, medical and other supplies into the SDF-held areas.

A source in the Kurdish-led autonomous administration of north and east Syria told Al-Monitor on condition of anonymity, “The areas that we control need produce and other food that can only be secured by importing them from neighboring areas, and after the Syrian regime closed the crossings, our areas became short on foodstuffs. As a result, the available products in the market were sold at higher prices since no one knew when the crossings would reopen. We contacted the Syrian regime to see why the crossings were closed in the first place. We were told that regime areas are suffering a fuel crisis after Iran could not supply it with oil due to the Suez Canal blockage.”

He said, “After several rounds of negotiations, we reached an agreement on providing the regime-controlled areas with 200 oil tankers per week, to be transported by the Qatirji Company, at a price ranging between $3,240 and $3,960 per tanker that includes 180 barrels of oil, so that the price per barrel ranges between $18 and $22, depending on the quality of the oil. Fees were imposed on commercial goods as well as travelers. … More than 200 oil trucks owned by the Qatirji Company crossed through al-Tabqa crossing coming from the Rumaila wells toward the Homs refinery during the past two days.”

Hassan al-Nifi, a political analyst who writes for several local and Arab newspapers, told Al-Monitor, “The crossings are the economic lungs of both the SDF authorities and the regime. The SDF seems to be in urgent need of outlets to sell its oil … and to supply its areas with food. The SDF prefers to sell oil to the regime because it realizes the regime’s dire need for oil allows it to name its price.”

Nifi added, “The economic crisis that worsened after the Caesar Act entered into force has pushed the Syrian regime to seize any opportunity to secure its oil needs, as its areas are completely paralyzed amid the lack of fuel. However, this [understanding] will not solve the problem, nor will the regime-controlled areas fully recover from this crisis by importing oil from the SDF. The regime is also preparing for the upcoming harvest season in the next few months and is seeking to reach deals with the SDF to secure oil.”

Wael Olwan, a researcher at the Jusoor Center for Studies based in Istanbul, told Al-Monitor, “The regime closing and reopening crossings with the SDF-controlled areas comes in the context of political and economic extortion to obtain economic benefits under the auspices of Russia. The closure coincided with leaks about an agreement between Russia and Turkey to open crossings with the opposition-controlled areas in Idlib, which affected the SDF’s negotiating position, as it was forced to agree to the regime’s conditions in terms of the fees imposed, the number of trucks and the increase in the amount of crude oil [supplied to the regime].”

Olwan said, “For several years now, the SDF-controlled areas have provided the regime with oil, gas and agricultural products in addition to large amounts of dollars that flow daily from the SDF areas to the regime’s, which helps the regime to circumvent the US sanctions imposed on it under the Caesar Act. Despite this, the regime is well aware that it is a lifeline for the SDF, and if it does not cooperate, the SDF will plunge into financial problems." He said this understanding is simply an interim agreement, with each party realizing it needs the other at the moment.

About 30 tons of vegetables and perishable foodstuffs such as cheese, cream and baked goods perished as 35 trucks were stuck at the al-Hawra crossing in western Raqqa when the crossings were closed. Several merchants were forced to sell their produce as fodder for livestock in the Anbaj area, western Raqqa.

A truck driver in the SDF-held areas told Al-Monitor on condition of anonymity April 6 after the crossings were reopened, “We were forced to pay large transit fees even though our cargo is only vegetables and foodstuffs. Otherwise, we would not be allowed to cross and would be forced to pay for the damages, in addition to the cost of transportation." He said that if the fees had not been paid, the owners of the goods would have suffered tremendous economic losses.