Uruguay has some of the highest case and death rates of coronavirus in the world. An Israeli medical team arrived in the South American country today. 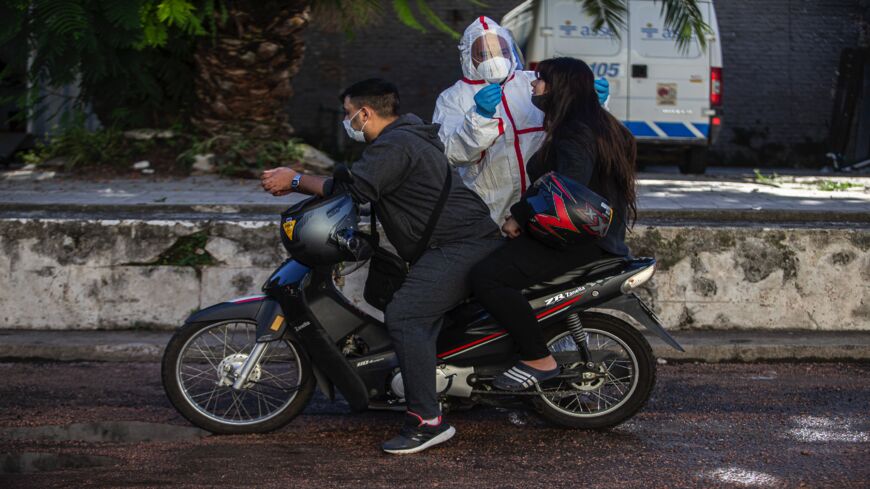 A person is tested with a COVID-19 PCR exam on April 14, 2021, in Montevideo, Uruguay. After cases surged in the last week, Uruguay has the highest rate of COVID-19 infections per million inhabitants in Latin America, surpassing Brazil and Mexico. The South American country, which has a population of 3.4 million, currently has the highest global rate of new positive cases of coronavirus. - Ernesto Ryan/Getty Images)

Israel sent a medical team to Uruguay amid a relatively large COVID-19 outbreak in the South American country.

Four Israeli doctors arrived in Montevideo today and will remain a week to work with Uruguayan counterparts to fight the coronavirus, the Israeli Embassy said in a tweet.

Uruguay currently has the second highest per capita rate of daily virus infections in the world. As of yesterday, the country’s seven-day rolling average was 835.5 cases per 1 million people, second only to Cyprus with 958.85. Its death rate is also relatively high, and the average was 18.71 deaths per million people a day yesterday. This ranks fourth worldwide based on available information, according to Oxford University’s Our World in Data.

Israel and also Saudi Arabia previously pledged to help Uruguay in its virus fight. Sheba Medical Center, which is Israel’s largest hospital, will donate $200,000 worth of equipment, including respirators and monitors. Saudi Arabia pledged to give $1,700,000 worth of respirators and protective gear, Uruguay’s Ministry of Foreign Relations said in a press release on Apr. 24.

Many Uruguayan Jews have immigrated to Israel in recent years.