Environmental Protection Minister Gila Gamliel published a law amendment to protect the Goldblotch grouper fish and the dusky groupers, but marine life lovers say the measures are not enough to ensure the recovery of these species. 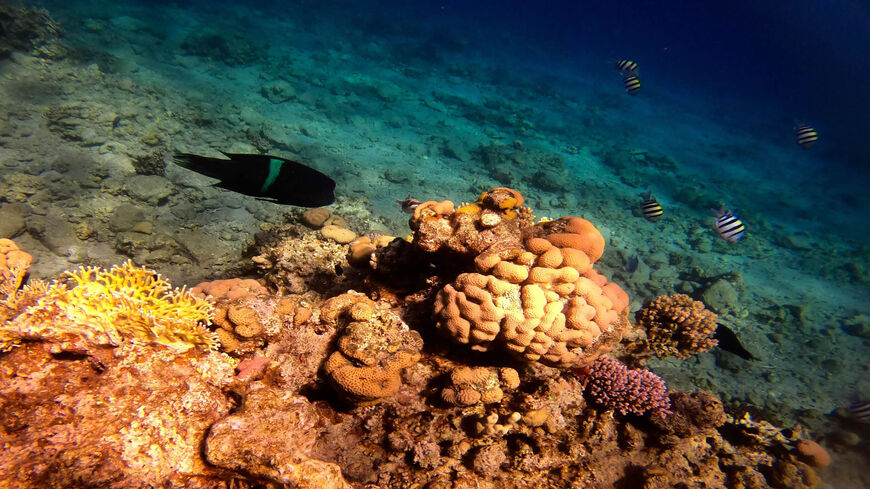 Marine life at a coral reef in the Red Sea waters off the coast of the southern port city of Eilat, Israel, Feb. 10, 2021. - Menahem Kahana/AFP via Getty Images

Animal and marine life lovers welcomed last week a decision by Environmental Protection Minister Gila Gamliel concerning two rare fish species in the Mediterranean Sea. On April 12, Gamliel signed an amendment to the law permanently adding the Goldblotch grouper fish to Israel’s list of protected marine species. The amendment also added the dusky grouper fish to that list — but only temporarily, for a period of one year. This second amendment prohibits hunting of the dusky grouper by undersea hunting rifles. If any dusky groupers are caught by default in fishing nets and could no longer be returned alive to sea, they could be commercially sold.

A statement issued by the ministry said, “As predators, the Goldblotch grouper and the dusky grouper are two key species of high ecological importance, which maintain the ecological balance in the sea by regulating the population of fish they prey on.”

The battle for the preservation of these two species is not new in Israel. Gamliel took her decision to legally protect the species last February, following two petitions to the High Court submitted by the Society for the Protection of Nature in Israel (SPNI) and following a consultation process championed by her ministry. Back then, Gamliel said the addition of the two species would allow for a “balance between protecting biodiversity and ecosystems in the Mediterranean Sea and ensuring that the livelihood of commercial fishermen is not harmed.”

Going back a few months, we can understand better the ongoing battle for enlarging the Israeli list for endangered species. A communique published last October — while SPNI was campaigning for the protection of the two species — said that the minister was considering adding two species of fish to the list of protected natural values in Israel, as these fish were not included in the protected species list that was published in 2019.

Gamliel was quoted as saying, "I will continue to exercise my powers to protect biodiversity in all ecosystems, including at sea. It is appropriate to preserve individual species as protected natural values, and in this way to improve the functioning of ecosystems and preserve biodiversity. I intend to conduct a process that includes public participation, and to obtain the views of all stakeholders on the matter, before formulating my final decision."

Her words expose the different interests at play, be it protection of the environment, commercial fishing or sport hunting at sea.

At the time, the international environmentalist group IUCN also engaged in this campaign. Its Grouper and Wrasse Specialist Group sent an open letter to Gamliel, asking her to fully protect both species, for at least 10 years. “Groupers are among the more sensitive species to fishing, due to their biology as well as their desirability (value and taste). Time and time again and species after species, we have seen that their populations are being negatively impacted when they are exploited (even at low levels) in the absence of effective management,” IUCN stated.

SPNI told Al-Monitor this week they are pleased with Gamliel’s April 12 amendment, but deplore the temporary measure for the dusky grouper (Locus in Hebrew). "The partial declaration on the Dusky grouper as an endangered species for one year only and sanctioning one hunting/fishing method only is not real positive news. These partial steps would not enable its populations to recover." SPNI further said they hoped that the protection of this species will be increased for 10 years at least and will include all hunting and fishing methods.

The SPNI is leading a special marine program titled "The Blue Half," which is dedicated to Israeli Mediterranean conservation reforms. The group explains that Israel’s legal system includes several tools for the protection of marine life. Among these tools are the 2019 declaration of natural assets and the 1998 natural parks law. Thus, all marine mammals, sea turtles and sharks are considered protected species. Israeli law also protects almost all the mollusks, except squid and octopuses. It protects coral and sea roses, sea cucumbers, sea urchins and sea lilies, and it protects some fish species.

For environmentalist groups in Israel, overfishing is by far the greatest threat endangering marine life in the Mediterranean Sea. Still, there are other threats as well. In February, a massive oil spill covered with tar miles of the Israeli coastline. Since then, the beaches have been cleaned and reopened to the public. The Ministry for Environmental Protection and the Health Ministry have declared that fish can be caught again and sold to customers and restaurants without any health risks. That being said, many in Israel fear that the oil spill would not be the last threat to hover over the fragile marine life in the Mediterranean.