How Egypt's government plans to save sea turtles

Cairo is preparing to launch a nationwide program to end the slaughter of sea turtles, which are becoming an endangered species. 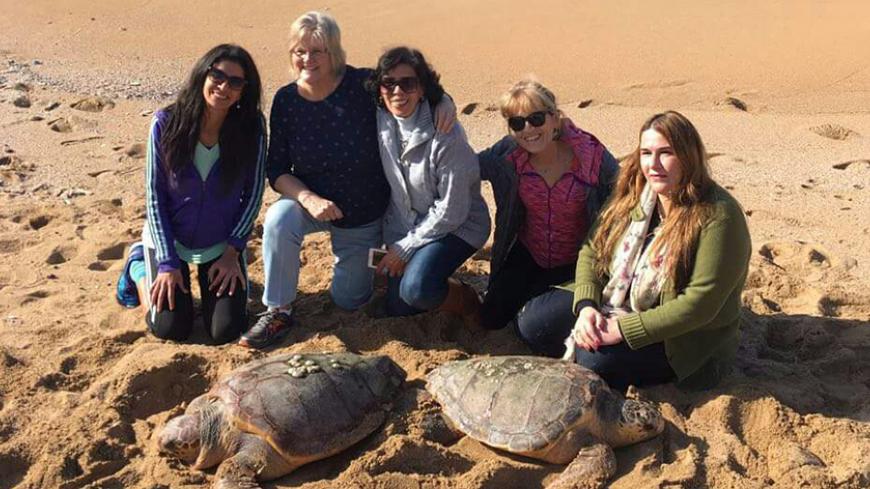 CAIRO — The Egyptian Ministry of Environment is preparing to launch the National Plan for the Protection of Turtles in mid-summer, according to Mohammed Issawi, the director of the reserves in the northern coastal area at the ministry.

Issawi told Al-Monitor that the plan involves several mechanisms, most importantly the formation of a task force for rapid intervention along the coasts to monitor fishermen and fishmongers and ban the trade of endangered species, namely sea turtles, and to release the captured ones in the closest natural habitat.

“The plan also includes awareness campaigns for beachgoers and distribution of leaflets on how to handle turtle nests and eggs and how to conserve them,” Issawi said.

The Alexandria Turtles Rescue Team (ATRT) in Egypt has been trying since its establishment in 2014 to track down and follow fishermen and fishmongers who sell sea turtles’ meat and blood. The rescue team buys the turtles before the fishermen slaughter and sell them, which is a weekly occurrence in the Alexandria market, especially at al-Maydan market.

Locals believe that eating sea turtle meat and drinking their blood enhances sexual ability and helps with weight loss. This is not to mention the widespread use of turtles’ blood and shells in magic and sorcery. All this is happening although these actions are considered infringements of the Convention on International Trade in Endangered Species.

“I participated in saving 41 turtles from slaughter during the past three years, and I helped in their rehabilitation and release back in the Mediterranean Sea,” May Hamada, the head of ATRT, told Al-Monitor. “I still feel guilty about one turtle that I could not save and that was immediately slaughtered to have its meat sold on the market.”

Hamada said she was with her team on el-Maahad el-Deni market in the Asafra area, east of Alexandria, in January. They had enough money to buy five turtles and could not pay for the sixth one. She had argued with the fishmonger to keep it on the side for her, so that she could secure the amount, but he refused as he told her it had been previously reserved for its meat.

Fishermen catch turtles to sell them in the market. The team monitors the markets that are famous for selling turtles and buys the turtles before releasing them into the Mediterranean Sea.

Mohammed Zreik, a fishmonger in Alexandria, told Al-Monitor, “Only old people and women who wish to conceive drink turtle’s blood, right after [the turtles] are slaughtered in some markets in the working-class areas and the slums. Young people do not drink it.”

Without the help of any external funding, Hamada and group members Hatem Moushir, Barbara Green, Ahmed Ashraf, Amer Mahmoud and Ayman Hussein have been carrying out awareness campaigns on social media and in schools in Alexandria to preserve rare sea turtles and other marine species that are endangered.

“We are making personal efforts to secure money to buy the turtles,” Hamada said.

Turtle slaughtering in Alexandria is an ongoing phenomenon despite the inspection campaigns and raids by the Ministry of Environment and environmental police in the fish markets.

"What we are doing is not enough in the absence of any Egyptian deterring law," Ahmed Salama, the head of the nature conservation agency at the Ministry of Environment, told Al-Monitor.

“We have completed the preparation of a draft law with penalties up to in prison and fines up to 1 million Egyptian pounds [$55,000] for those poaching endangered species,” he added.

There are seven types of sea turtles in the world, three of which are found in the Mediterranean and the Red seas, namely: the green sea turtle, the hawksbill sea turtle and the Leatherback sea turtle, according to a report titled “Marine monitoring and protection of turtles from Port Said to Alexandria,” issued by the Ministry of Environment’s reserves in the northern coastal area department. Al-Monitor secured a copy of the article, which is not available online.

According to the report, the Mediterranean coastal strip includes areas where turtles come out of the water to lay their eggs from mid-June until the end of September each year. Every turtle lays 120 eggs. The eggs nest for 66 days, after which the young turtles hatch and go back to the sea.

Ahmed Gad, a researcher at the Omayed Biosphere Reserve in Alexandria, told Al-Monitor, “The city of Alexandria was chosen to host the conference on the points of contact in the specially protected areas in the Mediterranean basin countries, in cooperation with the Regional Activity Center for Specially Protected Areas, scheduled for May 9. The conference will discuss monitoring indicators for sea turtles and future plans for their protection.”

In addition, the Ministry of Environment has previously succeeded in providing protection for sea turtles in the Red Sea area of Egypt through the Turtle Conservation Initiative launched in 2016.

Ahmed Ghalib. the director of the Red Sea natural reserves at the Ministry of Environment, told Al-Monitor, “Overfishing of sea turtles has been halted. … Overfishing has destroyed the turtles’ natural habitats, in particular when they come out to nest and lay eggs in the Red Sea islands, especially on the large and small Giftun islands where the hawksbill sea turtle lives.”

According to an official report from the Red Sea natural reserves department, of which Al-Monitor received a copy, 104 turtles that had left the water to lay eggs from May to September 2016 in the Red Sea islands were registered under the Turtle Conservation Initiative. Eighty-one of them were numbered, and more than 2,000 nests were counted in Zabargad Island, which is the most important nesting site for green turtles.

Ghareeb Saleh, a prominent fisherman in the Red Sea governorate, told Al-Monitor, “There is a custom among fishermen in the region [of the Red Sea] not to catch turtles because they represent an important tourism attraction. The population in the region does not like to eat turtle meat or to drink their blood [unlike in Alexandria]. These turtles were used in manufacturing trinkets and ornaments."

The Egyptian Turtle Conservation Initiative in the Mediterranean faces serious difficulties. Some residents of Alexandria are eager to eat their meat, hoping this would improve their sexual abilities and to drink their blood to get rid of diseases.