Israelis experience peace with Emiratis, Bahrainis and Moroccans, the way they never experienced it with their Egyptian or Jordanian neighbors. 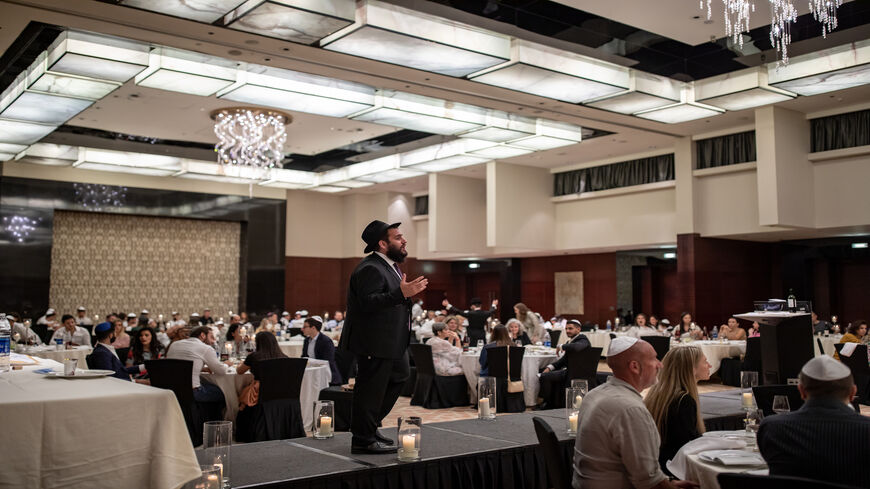 The Emirates News Agency publishes news items in several languages. And as of a few days ago, Hebrew is one of them. For Israelis, it is an extraordinary source of information to familiarize themselves with their new friends in the Middle East. This, together with the official Twitter account of the Emirati Embassy in Tel Aviv, enables Israelis to learn firsthand and in Hebrew what their Emirati friends are interested in, how their society functions and what their hopes are for the future.

And this works both ways. Head of the Israeli mission in Abu Dhabi Eitan Na’eh makes sure to frequently post messages in Arabic. Clearly, both sides want to get through messages of peace between societies, not just between governments.

This desire for peace between peoples and societies was concretely manifested April 4, when Morocco’s Ambassador to Israel Abderrahim Beyyoudh participated at the Mimouna celebrations in the southern town of Yeruham. Beyyoudh arrived to the event — celebrated by Jews of Moroccan origin — dressed in the traditional Moroccan attire. He then addressed the public in native Moroccan-Arabic. "Do you understand me?" he asked the participants, who nodded vigorously in approval. Some of them were born in Morocco, others had heard since childhood their parents and grandparents talk in the language of their homeland.

Yeruham’s Mayor Tal Ohana posted on Facebook after the event, "Sharing with you the adieu words [of Beyyoudh], the beginning of a wonderful friendship, of a very special person, thanking you all for the warm welcome you offered him."

In another sign of rapprochement between civil societies, Bahrain and the Emirates held this year, for the first time, ceremonies marking Holocaust Memorial Day. The small Jewish community in Manama held a ceremony in a synagogue recently renovated on the initiative of King Hamad bin Isa Al Khalifa. A similar ceremony took place in Dubai.

Another event was that of the Israel-Is association for bringing young Israelis to the world, which held last week a four-day conference in Dubai, inviting influencers from both countries to meet and connect. "Yesterday we launched Israel-Is influencers conference in Dubai, with dozens of social network influencers from Israel and the Emirates. These participants have together some 15 million followers from both countries! This is an enormous achievement with an impact which is hard even to explain — 15 million people who see and hear that true friendship could be built out of this peace. The influencers help transmitting the importance of peace for the two peoples, creating a better image of unity," the group posted on Facebook April 6.

Connecting societies goes to different places. On March 15, the Israeli Shalva music band, comprised of musicians with special needs, performed with musicians from the United Arab Emirates (UAE). Together, they sang and played Simon and Garfunkel’s “Bridge Over Troubled Water,” in a message of unity and peace. The event celebrated 31 years for the establishment of Shalva, with Emirati ambassador to the US Yousef Al Otaiba as guest of honor.

“The UAE shares Shalva’s unwavering commitment to improving the lives of people with disabilities. In the UAE, those with intellectual disabilities or special needs are referred to as people of determination, in recognition of their achievements across different fields. The collaboration to create the special rendition of ‘Bridge Over Troubled Water’ demonstrates how we must all continue to work together — regardless of nationality, religion or culture — to promote positive social change and foster more inclusive societies,” said Otaiba, one of the architects of the 2020 Abraham Accords.

Several Israeli singers have already performed in the Emirates and in Bahrain, but there are also numerous collaborations with artists from both sides. Shortly after the signing of the Abraham Accords last year, Israeli singer Elkana Marziano and Emirati artist Walid Aljasim produced “Ahlan Bik” (“Hello You”), celebrating normalization. The clip that accompanied the song was shot separately in Dubai and Tel Aviv. Success was immediate, with the clip getting more than a million views.

Last February, Marziano — of Moroccan origin and speaking Arabic fluently — collaborated with Moroccan singer Sanaa Mohamed, recording the duet "Junmar." Still, reactions in the Arab world to the duet reflected the fragility of these new normalization treaties and the emerging peace between societies. After releasing the duet, Mohamed received death threats and was forced to go into hiding.