One and a half years after they crushed the November 2019 protests with an iron fist, Iranian authorities are not just dodging responsibility, but they are also adding insult to injury. 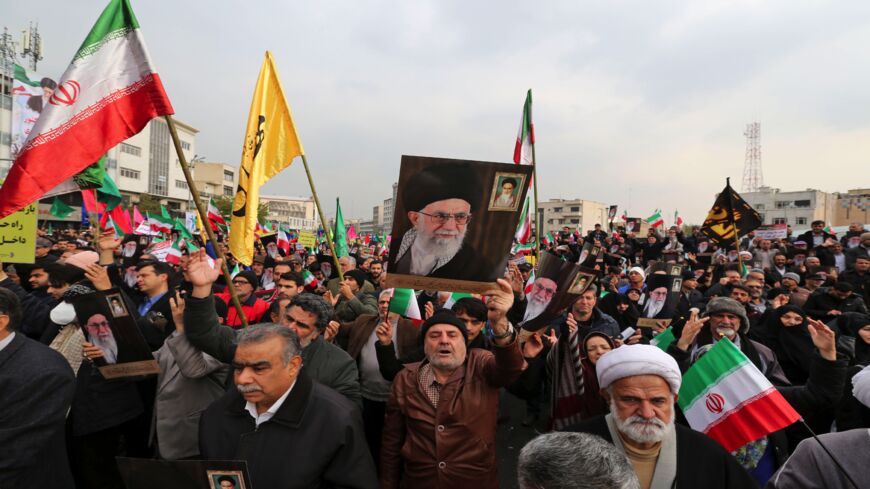 Iranians holding national flags and pictures of the Islamic Republic's supreme leader, Ayatollah Ali Khamenei, take part in a pro-government demonstration in the capital, Tehran's, central Enghelab Square on Nov. 25, 2019, to condemn days of "rioting" that Iran blames on its foreign foes. In a shock announcement 10 days ago, Iran raised the price of petrol by up to 200%, triggering nationwide protests in a country whose economy has been battered by US sanctions. - ATTA KENARE/AFP via Getty Images

The Iranian public's rage at the state-led crackdown on fuel price hike protests in November 2019 has only accumulated over the past 18 months, as authorities refuse to come clean or release any official report into the killings and abuses.

A series of inflammatory comments and decisions by Iranian officials over the past week seems to have further intensified the fury. The topic reentered the public sphere after Iran's security chief, Rear Adm. Ali Shamkhani, found himself in one of the most embarrassing situations in his political and military career, in which he had to deny a comment he had allegedly made in the heat of the unrest and during a private conversation with Mahmoud Sadeghi, an outspoken Reformist figure and lawmaker at the time.

"Sir, these are ordinary people. [The security forces] are killing these people in the streets. What are you doing? What if people persist and refuse to leave the streets? Are you then going to kill all the people?" Those are questions that Sadeghi claims had asked the rear admiral. "No need to be self-reserved, we will shoot them," Shamkhani allegedly answered.

Shamkhani is the secretary of the Supreme National Security Council (SNSC), an influential body of senior officials handpicked by Supreme Leader Ayatollah Ali Khamenei. In a statement, the SNSC dismissed the quote as "baseless" and promised to file a lawsuit against the former lawmaker.

The November 2019 turmoil was triggered by an abrupt government decision to slash fuel subsidies that pushed gasoline prices by 50%. Sporadic gatherings quickly evolved into mass anti-government demonstrations. The flames of public anger that engulfed some 100 cities and towns, however, were put out by the most brutal crackdown ever witnessed in post-revolution Iran.

Amnesty International has documented and counted at least 304 deaths at the hands of the Islamic Republic's security. The group has noted, nevertheless, that the real tally could stand way higher. A Reuters report relying on unnamed sources within the Iranian supreme leader's office and the country's Interior Ministry has put the figure as high as 1,500.

Six months after the unrest, Iran's interior minister suggested that up to 225 people had been killed. But a detailed investigation into the violence and a trial of those behind the deaths remain unfulfilled demands.

During the rallies, thousands were also arrested, some still languishing behind bars. Horrifying accounts of physical torture and sexual abuse against the detainees continue to come out, and an unspecified number are also believed to have died in custody. Weeks after the protests were crushed, bodies with severe torture marks were still being recovered from dams and rivers.

In its official narrative, the Islamic Republic has linked much of the protests to adversary states, claiming that foreign-backed gunmen were present in the crowds.

But ex-lawmaker Sadeghi says the question of proof about such statements was raised during closed-door meetings with SNSC officials, who would admit that "No, [the protesters] were ordinary people."

While Khamenei is said to have warranted the crackdown, the role played by Interior Minister Abdolreza Rahmani Fazli has been particularly under the spotlight. Rahmani Fazli drew the ire of Iranians after a callous response when grilled by some parliamentarians over why the protesters were shot in the head. "Well, legs have been shot as well," he answered.

A push by several then-lawmakers, including Ali Motahari, for the minister's impeachment hit a snag. Motahari suggested the impeachment bid had been nipped in the bud by the supreme leader.

Yet the unequivocal support from the Iranian leader does not seem to have made Rahmani Fazli immune enough. The minister faced a fresh headache only last week after Ahmad Alirezabeigi, a lawmaker representing the northwestern city of Tabriz, called for him to be held accountable for the "blood on his hands" from the 2019 clampdown. The minister's deputy for parliamentary affairs threatened the parliament member with a lawsuit. Mohammad Javad Kolivand also described many of the protesters as "thugs," a term that was part of the name-calling Iran's supreme leader applied in reference to the protesters.

Defying the lawsuit threat, the lawmaker expressed readiness for his own trial, which "could provide the public with a chance to hear the bitter truth from the November 2019 events."

Iran's security apparatus has also been after some of the families, whose loved ones were shot dead, while the struggle by those families for justice has led them nowhere. Silenced and threatened, they have been warned that should they share their stories, they will face imprisonment.

The parents and even relatives of one such victim, Pouya Bkhatiari, have been detained every now and then over the past several months. In the latest, on March 7, Bakhtiari's parents along with the parents of four more victims and a group of activists had to stay in police custody overnight after they were surrounded by scores of security vehicles in the central city of Isfahan. They were holding a gathering in commemoration of an Iranian hero who fought for the ill-fated Constitutional Revolution in the early 20th century.

Iranian authorities' refusal to address the criticism about their handling of the 2019 upheaval seems to have left the state-nation gap unbridged. Only three months after the killings, the Islamic Republic was holding a parliamentary vote. But to its dismay and embarrassment, the vote was marred by the lowest election turnout in its history.

In June, Iran will be going to key polls again to elect a new president. No matter who wins, Khamenei has traditionally invested in voter turnout as a referendum on his own legitimacy.

The open file of the 2019 unrest remains one of the key factors at play in the vote. With no attempts to heal the scars left by its crackdown, the Islamic Republic shall not be surprised to receive yet another blow to its legitimacy, as voter apathy is one of the few available options for a disillusioned Iranian public to silently express its discontent.