President Hassan Rouhani says the recent decision to enrich uranium to 60% is in response to the alleged Israeli attack on Iran's Natanz nuclear facility. 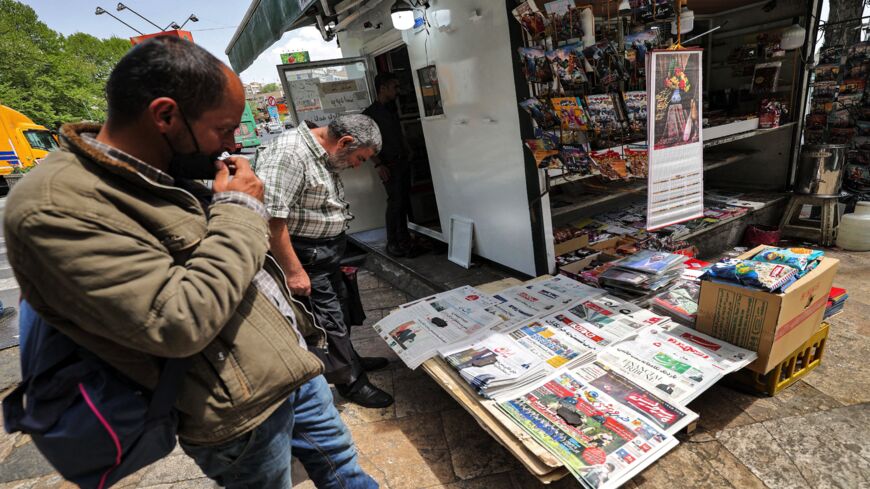 Men view the covers of local newspapers laid out at a stall in the Shemiran district of Iran's capital, Tehran, on April 14, 2021. Iran warned it would start enriching uranium up to 60% purity after an explosion it blamed on archenemy Israel hit its key nuclear facility in Natanz. - ATTA KENARE/AFP via Getty Images

Iranian President Hassan Rouhani addressed today the recent attack on Iran’s nuclear facility at Natanz and the country’s announcement that it would enrich uranium up to 60%.

Speaking at a Cabinet meeting, Rouhani said the intelligence agencies of the country would have to produce reports about the latest attack on the Natanz nuclear facility. However, Iran believes it to be the work of Israel, Rouhani said, adding that Iran “will respond.” He continued, “Our first response is to use IR6 centrifuges instead of IR1 centrifuges so that they understand that they cannot hold us from this power.”

Rouhani added, “That they see we have activated IR6 centrifuges in Natanz and that we will reach 60% enrichment is our response to their wickedness and that they can’t commit plots and crimes against Iran and for us not to do anything.” Israel has not officially taken responsibility for the attack, but a number of sources have leaked to Western media suggesting it was an Israeli operation. The United States has denied any involvement.

Before the 2015 nuclear deal, known as the Joint Comprehensive Plan of Action (JCPOA), Iran was enriching at 20%. The terms of the JCPOA reduced the enrichment level to below 4%. However, after the US exit from the deal in 2018 and the reapplication of sanctions, Iran increased enrichment in various steps, now reaching 60% after the latest Natanz attack.

One of the arguments floating in Western media is that the attack on the Natanz facility would give the United States leverage in the negotiations by eliminating a sense of urgency regarding Iran’s increased enrichment. Yet Rouhani rejected that claim, saying, “They want to empty our hands before the negotiations, but we will return with a stronger hand to the negotiations.”

Rouhani also continued his push to pursue face-to-face negotiations with the United States despite domestic opposition. Given the US exit from the deal and maximum pressure campaign, including the assassination of Iran’s former Quds Force commander Maj. Gen. Qasem Soleimani, Supreme Leader Ayatollah Ali Khamenei has not permitted any face-to-face talks with the United States and called for an immediate US sanctions removal back to 2015 levels rather than another negotiation. The current meetings taking place in Vienna are between Iran and the P4+1, essentially all of the permanent members of the UN Security Council minus the United States.

“Do not be afraid of the Vienna negotiations,” Rouhani said, adding, “Some are worried that the negotiations in Vienna would yield a result and the sanctions would be removed and it would have influence on the elections.” He continued, “No party or side is allowed to hold the livelihoods of the people hostage for the elections.” He added that permitting negotiations and the removal of sanctions “will not harm anyone,” meaning any political group.

Iran’s presidential elections take place this summer. Conservatives are likely to be in a good position to win this election due to the tough economic conditions under the Rouhani administration and a lower voter turnout. If Rouhani is able to deliver sanctions removal before leaving office, he would be able to secure his legacy and help keep the moderate branch in office in the next election.