Following the alleged Israeli attack on Iran's Natanz nuclear facility, Tehran has announced it will enrich uranium to 60% purity. 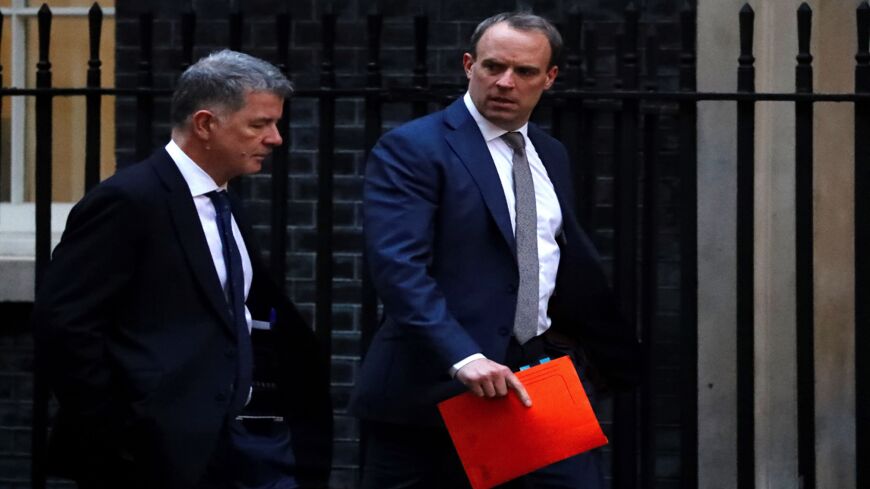 Britain's Foreign Secretary and First Secretary of State Dominic Raab (R) walks from the Foreign Office toward 10 Downing Street in central London on Jan. 6, 2020. The leaders of Germany, France and Britain on Sunday urged Iran to drop measures that go against the 2015 nuclear deal after Tehran announced it would no longer abide by a limit on enrichment. - TOLGA AKMEN/AFP via Getty Images

The United Kingdom, France and Germany expressed their “grave concern” in a statement over Iran’s plan to ramp up uranium enrichment, a move the European powers warned would undermine the fragile diplomatic process as the Joe Biden administration seeks to revive the nuclear agreement.

“This is a serious development since the production of highly enriched uranium constitutes an important step in the production of a nuclear weapon,” the European statement said. “Iran has no credible civilian need for enrichment at this level.”

Iran on Tuesday said it would begin enriching uranium at 60% purity using advanced centrifuges, in retaliation against a suspected Israeli attack on its Natanz underground nuclear facility.

The higher enrichment — three times the current level — would represent a significant breach of the nuclear deal but fall short of the 90% Iran would need to build a bomb. The attack on Sunday, which according to an Iranian lawmaker damaged or destroyed several thousand centrifuges, likely set back Iran’s ability to enrich uranium by many months, although the full extent of the damage isn’t known.

In January, Iran said scientists at its Fordow plant were enriching uranium at 20% purity, far beyond the 3.67% limit set out in the 2015 nuclear deal known as the Joint Comprehensive Plan of Action (JCPOA).

The latest Iranian announcement comes as the United States, Iran and the original signatories to the landmark nuclear accord have been meeting in Vienna for talks aimed at negotiating a US return to the agreement, which the Biden administration says is contingent on Iran reversing its many breaches of the deal. Tehran says it will return to compliance only after Washington lifts the tough sanctions imposed by the Trump administration.

The trio of European countries, also known as the E3, urged Iran “not to further complicate the diplomatic process” with yet another violation of the deal. In addition to scaling up its enrichment, Iran has also announced plans to install 1,000 additional centrifuges at Natanz.

“Iran’s announcements are particularly regrettable given they come at a time when all JCPOA participants and the United States have started substantive discussions,” the E3 statement said. “Iran’s dangerous recent communication is contrary to the constructive spirit and good faith of these discussions.”

The nuclear talks in Vienna, which include indirect discussions between Iranian and US representatives, are scheduled to resume on Thursday.