The talks in Vienna come less than a week after a suspected Israeli attack on an Iranian nuclear facility. 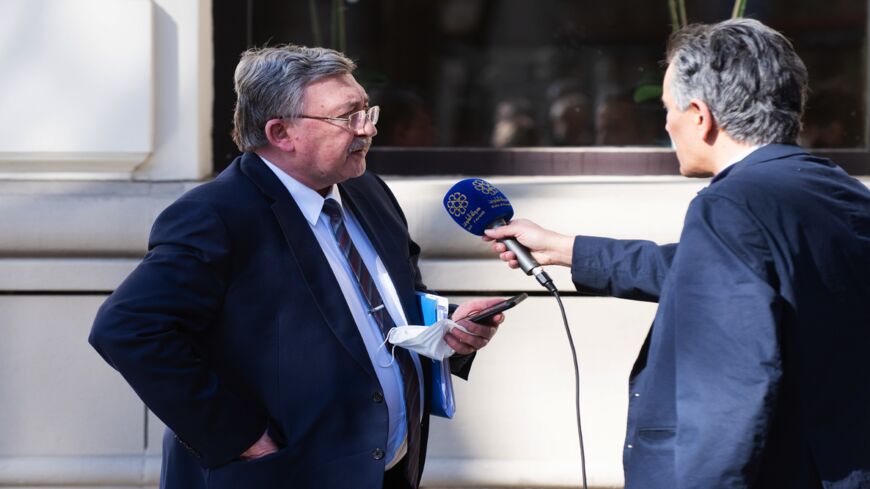 Russia’s governor to the International Atomic Energy Agency (IAEA), Mikhail Ulyanov, is interviewed as he leaves after the Iran nuclear talks on April 6, 2021, in Vienna, Austria. Representatives from the United States, Iran, the European Union and other participants from the original Joint Comprehensive Plan of Action (JCPOA) are meeting both directly and indirectly over possibly reviving the plan. - Thomas Kronsteiner/Getty Images

Russia on Thursday described the recent talks between Iran and world powers in Vienna as “positive,” even as tensions soared over a suspected Israeli attack on an Iranian nuclear site and Tehran’s planned hike in uranium enrichment.

Iran and the other signatories of the landmark nuclear deal, known as the Joint Comprehensive Plan of Action (JCPOA), on Thursday resumed talks in the Austrian capital aimed at salvaging the deal and returning the United States to the 2015 agreement.

President Donald Trump unilaterally withdrew from the accord in 2018 and reimposed harsh economic sanctions, prompting Tehran to gradually breach its obligations under the deal. The Joe Biden administration is seeking a return to the deal, but only if Iran first reverses its violations.

Russia’s ambassador to the UN in Vienna, Mikhail Ulyanov, tweeted after the talks concluded that the “general impression is positive,” adding that discussions will resume on Friday.

Iran on Tuesday said it would begin enriching uranium at 60% purity using advanced centrifuges, in retaliation against a suspected Israeli attack on its Natanz underground nuclear facility. The announcement would represent a significant breach out of the enrichment restrictions set out by the JCPOA and bring Iran that much closer to the 90% purity needed to build a bomb.

In a sternly worded statement on Wednesday, the United Kingdom, France and Germany — the nuclear deal’s European signatories — blasted Iran’s recent actions as “provocative and “contrary to the constructive spirit and good faith of these discussions.”

US Secretary of State Antony Blinken on Wednesday said Iran’s enrichment announcement “calls into question Iran’s seriousness with regard to the nuclear talks, just as it underscores the imperative of returning to mutual compliance.”

“Iran’s ‘seriousness of purpose’ in pursuing diplomacy was tested in the three years since Trump withdrew from the nuclear accord,” tweeted Iranian Foreign Minister Mohammad Javad Zarif. “Iran — by remaining in the deal — passed with flying colors.”

Iran has described the attack on its Natanz facility as “nuclear terrorism,” for which Israel has neither confirmed nor denied involvement. Unnamed intelligence officials have told US outlets that Israel was behind the Natanz blackout.

One Iranian lawmaker said the apparent act of sabotage had damaged or destroyed several thousand centrifuges, dealing a major blow to the country’s uranium enrichment capabilities. In recent days, Iran’s leaders have said they will replace the damaged centrifuges with more advanced centrifuges, in what would amount to another violation of the JCPOA.

Following the Natanz attack on Sunday, it was unclear whether Iran would even attend the Vienna talks. But on Wednesday Iranian President Hassan Rouhani indicated his country wouldn’t boycott the diplomatic process, which Iran hopes will eventually lead to the lifting of crippling US sanctions.

“The Supreme Leader has clearly defined the framework of our negotiations, and we will continue our work within that framework,” he told a televised Cabinet meeting.

After meetings wrapped on Thursday, China’s representative, Wang Qun, called for fewer disruptions and a focus on lifting sanctions.

The recent developments “have reinforced our conviction that what is needed most now as a top priority is to do away with any disruptive factors and pick up the pace of negotiation.”