The second attack on a nuclear facility in five months has prompted calls for Iran to quit talks on reviving the nuclear deal. 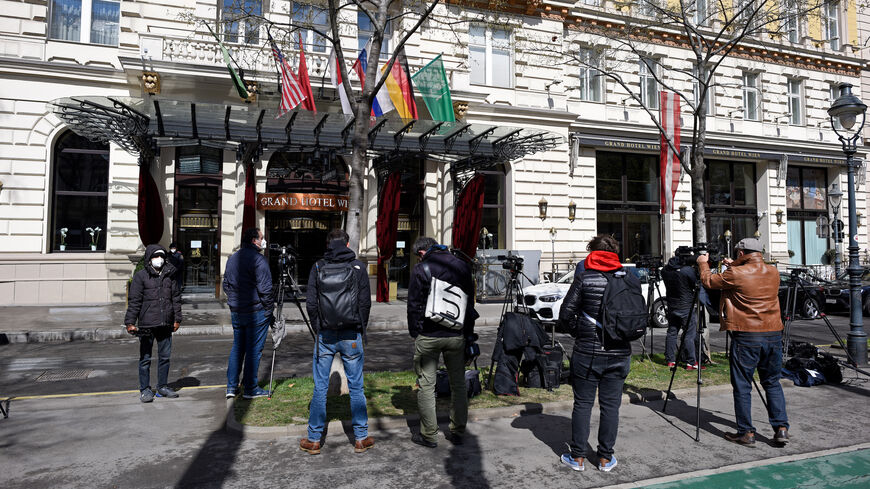 Journalists wait outside the Grand Hotel where the Iran nuclear talks are resumed on April 6, 2021 in Vienna, Austria. - Thomas Kronsteiner/Getty Images

After another attack on Iran’s Natanz nuclear facility, hard-liners in Iran have called for ending the negotiations in Vienna on the United States' reentry to the 2015 nuclear deal.

Over the weekend, a suspected Israeli attack caused a power outage in the nuclear facility located in Esfahan province. The site has been attacked previously, years before the landmark 2015 nuclear deal, in a sophisticated cyber attack carried out by European countries, the United States and Israel. The site was also attacked in 2020, an explosion also reportedly caused by Israel prompted Iran to begin underground work at the center.

The second attack in a short few months, while Iran is busy negotiating with the remaining parties of the Joint Comprehensive Plan of Action to discuss the terms of a US reentry and Iran’s compliance, has upset opponents of President Hassan Rouhani.

Tasnim News Agency reported, “Mr. Rouhani, quit the negotiations under the shadow of assassinations.” The article read, “The US expresses its good intentions in the negotiations but is a partner with the Zionists in terrorists actions. Therefore the wisest and perhaps the least that could be done is quitting the negotiations taking place in Vienna.”

Tasnim continued that not responding to such attacks is a concession to the opposing side and “signals to the Americans to continue this process where they receive concessions behind the negotiation table and continue committing acts of terror.”

Rouhani adviser Hesamodin Ashena tweeted, “Should the answer to cutting off electricity at Natanz be to cut off negotiations in Vienna?” The question received hundreds of responses, including from well-known conservative voices. Yaser Jebraily, head of the Center for Strategic Assessment of Implementing the Macropolicies of the Islamic Republic of Iran, tweeted sarcastically in the language favored by the Rouhani administration, “No, this terrorist attack shows the failure of the enemy and citing this failure we can emerge in the negotiations from a position of strength!”

The editor of hard-line Javan newspaper tweeted, “If I were an official of the Islamic Republic, after the sabotage at Natanz I would order the suspension of talks in Vienna. What does it mean when we agree to retreat when they attack? … This is a carrot-and-stick effort by the Americans and Zionists.”

While US officials have told the press that they were not involved in the latest attack on Natanz, most Iranian media outlets do not believe it. Yasser Jallali wrote for Mehr News Agency, “The Americans and Zionists are coordinating in Natanz.” Jallali said that such acts of sabotage cannot take place without the approval of the US president and Iran “must not view the negotiations independently” from these acts. He wrote that ignoring the connection between the talks and the acts of sabotage is a “big miscalculation and will have serious risks.”