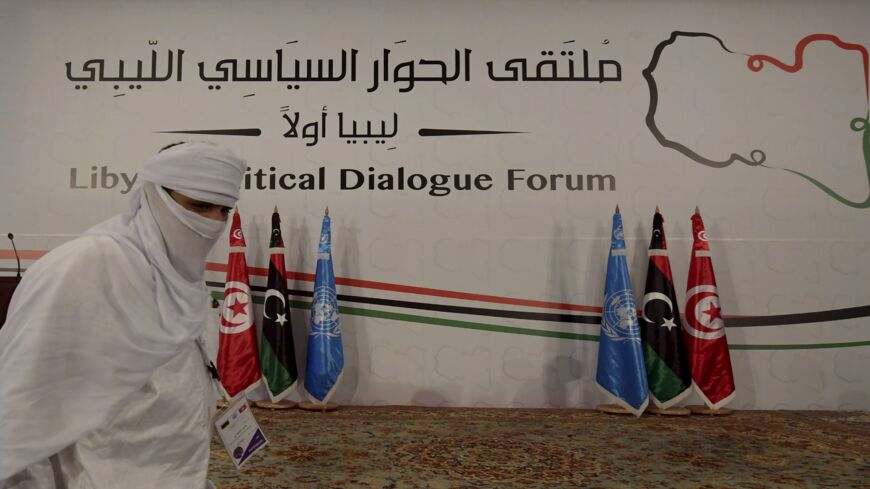 A delegate from Libya takes part in the Libyan Political Dialogue Forum hosted in Gammarth on the outskirts of Tunisia's capital, on Nov. 9, 2020. In October, the two main sides in the complex Libyan conflict signed a landmark cease-fire agreement. - FETHI BELAID/AFP via Getty Images

Libya’s unity government lauded a decision by the UN Security Council to send international observers to the war-torn country to monitor a nationwide cease-fire, now in its sixth month.

The UN Security Council on Friday passed a unanimous resolution approving a proposal to send cease-fire monitors to Libya and calling once again for foreign forces and mercenaries to leave the country.

The observers will work independently of the 5+5 joint military commission established between Libya’s opposing sides last year under the internationally backed peace initiative.

Why it matters: The arrival of new observers may help bring exposure to the continued presence of foreign fighters in Libya, but Friday’s resolution does not give the Security Council teeth to enforce their departure.

Some 20,000 foreign fighters remained in Libya at the end of last year, according to a UN estimate. Among them were more than 1,000 Wagner Group paramilitary fighters under Russia’s Defense Ministry, as well as Syrians fighting on both sides of the conflict. Turkish and UAE military advisers have also reportedly been on the ground during the conflict, as well as Sudanese and Chadian mercenaries.

Resolution 2570 “strongly urges” member states to support the cease-fire agreement signed last October and the withdrawal of all foreign forces. Foreign fighters were scheduled to leave Libya in January under last year’s agreement, but so far there has been little sign of their departure.

What’s next: As many as 60 unarmed observers under the UN’s assistance mission to Libya (UNSMIL) are set to deploy to the frontline city of Sirte under the resolution once security arrangements are made, a spokesperson for UN Secretary-General Antonio Guterres told reporters.

A legislative framework for Libya’s future elections is scheduled to be in place by July 1. Parliamentary and national elections are scheduled for Dec. 24, with the rival governments in Tripoli and Tobruk vowing to support the process.