The latest visit by top European Union officials to Ankara has shown that the European Union has effectively turned its back to its avowed core principles and values vis-a-vis Erdogan. 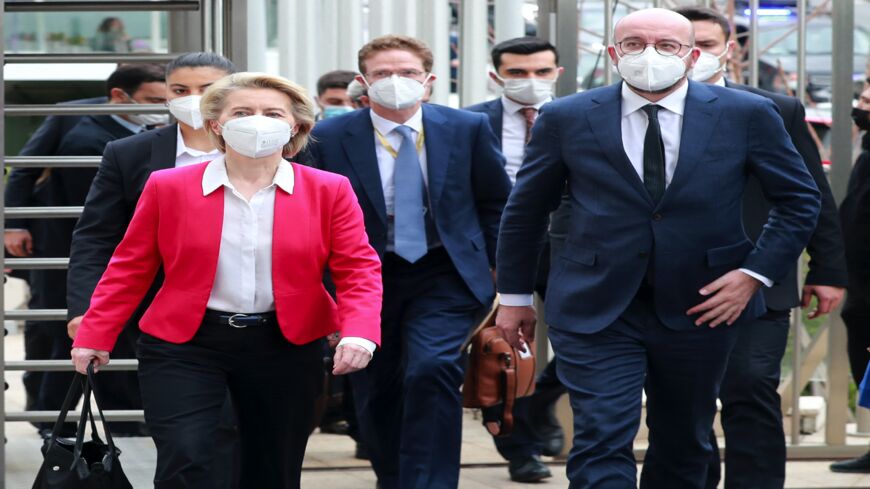 A video of the leaders assembled in a meeting room in Ankara showed Erdogan and European Council President Charles Michel settling themselves into gilded chairs, while Leyen appeared unsure of where she was expected to sit. She stood staring at them, gestured with her right hand and seemed to say “um” or “ehm,” reported The Washington Post.

The video footage was widely circulated in social media by members of the European Parliament.

“‘Ehm’ is the new term for ‘that’s not how the EU-Turkey relationship should be,’” Sergey Lagodinsky, a German politician from the Green Party, tweeted.

After some hesitation, the startled Leyen found a couch to sit on, but the brief pause was enough for the meeting to be labeled “sofagate” by many social media users.

Numerous Turks were outraged by the visit too. Their anger was not targeted at sofagate, but rather at the EU’s nonchalance to the deteriorating human rights situation in Turkey.

Watching the video, I was reflecting on the collective mood of the many among my countrymen. “Not shown a seat to sit, Ursula von der Leyen ‘ehms’ in Erdogan's palace. Well-deserved. Michel had to be kept standing as well. Both capitulated, therefore deserved to be humiliated. Betrayal to Turkey's democrats should have a price,” I tweeted.

Nevertheless, the humiliation of Leyen by Erdogan sent shock waves throughout Europe. Mario Draghi, prime minister of Italy — a country with close ties to Turkey — called Erdogan a "dictator."

"I am very sorry for the humiliation that the president of the Commission had to suffer. … Let's call them for what they are, dictators, but with whom we need to cooperate," Draghi told reporters.

The key point in his remarks was cooperation.

The emphasis on cooperation reflects the EU’s inability to deal with Erdogan’s Turkey. As a result of this, Erdogan has and will continue to humiliate EU leaders because they made him aware that they need him more than he needs the EU.

Even after Leyen was humiliated in his presence, Michel was stubbornly keeping up with the language of appeasement to Erdogan during the meeting. Many had questioned why Michel was so quick to take a seat while Leyen was "ehming" without a seat offered to her, forcing the European Council president to express his "deep regret about the impression" created by the footage.

"But I was also convinced that [objecting] would create a much more serious incident that would destroy … our ability to finally have a slightly less negative relationship with Turkey," Michel, former Belgian prime minister, told a Belgian television after the meeting.

These remarks are a brazen display of European disunity, and that is why Erdogan believes that humiliating the EU leaders pays off more than courting them. He learned it by experience over the years. When he had friction with Angela Merkel and other German officials, he found the liberty to liken them to "Nazis.” The ensuing spat was quite a short one, and Germany, albeit covertly, stood with Erdogan against French President Emmanuel Macron when Ankara’s ties with Paris and Athens went down over contested territorial claims in the Eastern Mediterranean. During the escalation, Erdogan went as far as to call Macron’s mental health into question.

Erdogan is as experienced as Putin after staying in power for two decades. He has especially more insight regarding European politics because he led an EU candidate-member state.

Moreover, Erdogan is a very shrewd politician. He has seen to what extent Europe trembles with fear of a possible refugee influx to Europe.

The EU also is very keen not to see any military escalation in the Eastern Mediterranean between Turkey, Greece and Cyprus.

Lastly, the EU looks keen not to push Turkey further toward Russia.

More pragmatic and more Machiavellian than most if not all of the EU leaders, Erdogan learned how to deal and engage with them. Over the years, he found out that humiliating them proved to be an effective instrument. Doing so did not cost him anything.

Even after the humiliating scene, Michel and Leyen struck a positive tone during the joint press conference.

Such an attitude on the part of the EU leaders will yield no results, as previous experiences illustrated clearly.

Michel and Leyen also informed all of us that in their meeting with Erdogan, they "clearly underlined in the talks that respect for fundamental rights and the rule of law is crucial for the EU."

Yet these were empty words to save face — unless the EU made clear what its attitude is if the respect for fundamental rights and the rule of law is not observed in Turkey.

Before the Ankara meeting took place, Cem Ozdemir, a German Bundestag member of Turkish origin and former chairman of the Greens, sharply criticized the Michel-Leyen initiative.

“The fact that the EU leaders are now meeting Erdogan to give gifts is “Brussels self-dwarfing” and “a mockery of all democrats in Turkey,” he said in a tweet.

German daily Tageszeitung on April 6 under the title "EU surrenders to Erdogan" argued that Leyen, through her visit, sent a signal that the EU is more interested in power, not in human rights. "While US President Joe Biden has steadfastly refused to even speak to Recep Tayyip Erdogan on the phone since his inauguration in January, von der Leyen and Michel travel to Ankara as if there was something to celebrate. The situation in Turkey is worse than it has been for a long time," the daily wrote.

After the visit, a leading Turkey expert in Washington, Nicholas Danforth, confirmed this outcome.

"I understand why diplomats need to be pragmatic and positive, but I don't understand the benefits of sounding delusional. I'm sure the EU thinks this is relatively harmless because barring major reforms, the upgraded Customs Union will never happen, but they don't seem to realize that just maintaining the illusion of positive momentum is a big win for Erdogan," he tweeted.

Leyen, in Ankara, tweeted, “We are aiming for an honest partnership. A partnership between the EU & Turkey that enables us to strengthen what brings us together and address what divides us. It is still the beginning of the road. The weeks and months ahead will show how far we go on this road together.”

First of all, the EU-Turkey partnership is anything but honest. Turkey is no more treated as a candidate member and, truly, has no aspirations to become a full EU member. The relationship between the two parties have transformed into a transactional one, not much different than, for example, the EU-Saudi Arabia or the EU-China relationship.

The EU turned its back on its avowed values like respect to human rights, fundamental freedoms and the rule of law when engaging with Turkey. They are merely paying lip service. Therefore, both Brussels and Ankara can go on this road together as long as Erdogan keeps winning and the EU digests humiliation.