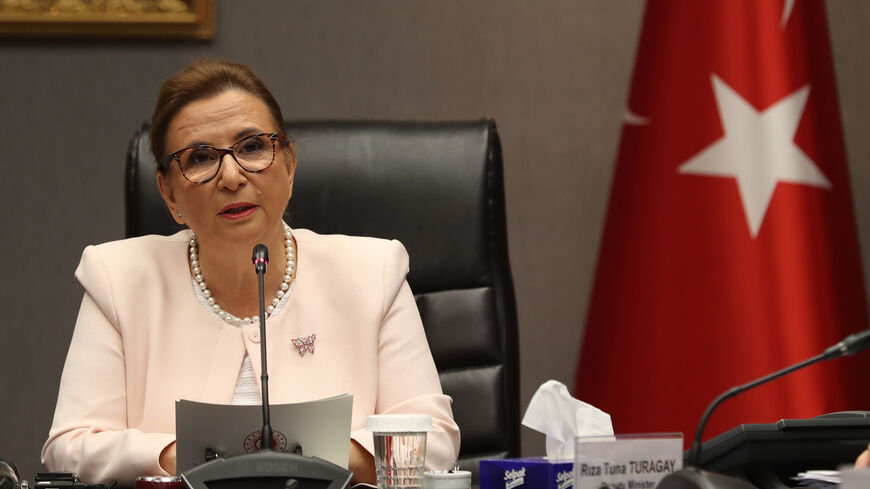 ADEM ALTAN/AFP via Getty Images - Turkish Trade Minister Ruhsar Pekcan gives a press conference following her meeting with the US secretary of commerce in Ankara Sept. 10, 2019.

In a late-night decree, Erdogan fired Trade Minister Ruhsar Pekcan, who faced accusations of nepotism following a report Friday alleging she favored her spouse’s company in government tenders. According to the OdaTV news site, Pekcan directed the Trade Ministry to purchase 9 million liras' ($1.1 million) worth of disinfectants from two companies owned by her husband, Hasan Pekcan.

In a statement Tuesday, Pekcan denied any wrongdoing. She confirmed the purchases but said they amounted to about 500,000 liras ($61,000) in total, adding the tenders were allocated according to regulations and her spouse’s companies were chosen because they offered the lowest bids.

With no reason officially given for the dismissal, Pekcan was replaced Wednesday by Mehmet Mus, a parliament member for the ruling Justice and Development Party (AKP) who reportedly has close relations with former finance minister and Erdogan’s son-in-law Berat Albayrak.

The three new cabinet ministers were sworn in during a parliamentary session in Ankara Wednesday.

“I want to thank Zehra Zumrut Selcuk and Ruhsar Pekcan for their services until today,” Erdogan said Wednesday, later adding, “Now, we have entered a new period where we all have to focus on the 2023 elections.”

Erdogan and his AKP are working to revive waning voter support amid an economic downturn marked by high inflation and an ongoing surge in national COVID-19 cases.

Following rumors of a pending cabinet reshuffle in recent months, up to four or five additional high-level appointments are expected in May after the end of the Islamic holy month of Ramadan, an unnamed government official told Reuters Wednesday.

Ankara-based political scientist and commentator Burak Bilgehan Ozpek said Pekcan’s dismissal was likely a strategic move by Erdogan to gain “credibility in the eyes of his voters” and reflected efforts by AKP insiders to gain influence ahead of the next election cycle.

He added, “These scandals are used by one sub-group against another one.”

Ozpek noted the new trade minister, Mus, has close links to Albayrak, who has remained out of the public sphere since his surprise resignation in November but is believed to hold significant sway among some AKP members.

Mus was among the first AKP officials to defend Albayrak after his resignation and called for him to remain in office. Turkey’s main opposition Republican People’s Party has since ramped up a campaign against the AKP alleging $128 billion in Central Bank foreign currency reserves were unjustly spent under Albayrak’s tenure to prop up the lira, claiming the policy weakened the nation’s financial stability.

Erdogan responded to accusations of economic mismanagement Wednesday, saying authorities had used $165 billion in foreign currency reserves between 2019 and 2020 and that the opposition was “wrong from head to toe” in its allegations.

"We carried out a battle ... against the triangle of evil of interest rates-exchange rates-inflation in the economy," Erdogan said Wednesday, sparking a nearly 1% drop in the Turkish lira against the dollar.