Saudi Arabia's initiative to settle the conflict and war in Yemen gets support from Cairo. 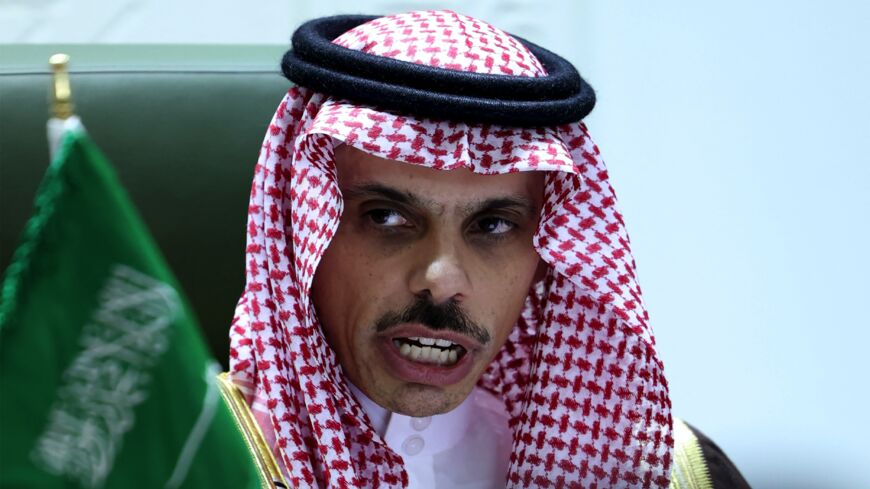 Saudi Foreign Minister Faisal bin Farhan Al Saud speaks during a press conference in the capital, Riyadh, on March 22, 2021, announcing an offer of a cease-fire with Yemen's Houthi rebels. Saudi Arabia offered Yemen's Houthi rebels a "comprehensive" cease-fire among a series of proposals aimed at ending the catastrophic six-year conflict. The proposals include "a comprehensive cease-fire across the country under the supervision of the United Nations," a government statement said. - FAYEZ NURELDINE/AFP via Getty Images

Speaking at a press conference in Riyadh, Prince Faisal said that in coordination with the United Nations, Oman and US special envoy for Yemen Timothy Lenderking, Saudi Arabia aims to end the war in Yemen through this initiative.

He said the initiative involves a cease-fire monitored by the UN at all fronts throughout Yemen; partially reopening the airport in the Yemeni capital, Sanaa; and allowing fuel and food imports into the country via the seaport of Hodeidah. The initiative also includes the establishment of a sharing mechanism of the airport and seaport customs between the Saudi-backed government and the Houthis, the salary disbursement of all government employees through a joint bank account and the resumption of political talks.

The war in Yemen erupted on March 25, 2015, after the Saudi-led coalition of Arab countries, including Egypt and the United Arab Emirates, launched Operation Decisive Storm against the Iran-backed Houthis in Yemen, who are allied with forces loyal to late President Ali Abdullah Saleh, who was ousted in the 2011 revolution. The Yemeni war soon turned into a proxy war between Tehran and Riyadh.

Prince Faisal said during his March 22 press conference the initiative will be enforced under UN supervision once the Yemeni government and the Houthis approve of it. He accused Iran of being the main reason behind the continuation of the war.

“The Ministry [of Foreign Affairs] reminds that the Houthi militias met all previous initiatives with obstinacy and procrastination and worked to prolong and deepen the humanitarian crisis by rejecting our initiative to open Sanaa airport, plunder relief aid and steal [Hodeidah] port revenues allocated to pay employees’ salaries, in exchange for misleading the international community by provoking crises at the expense of the suffering of Yemenis,” the Yemeni Foreign Ministry said in a March 23 statement.

Many Arab countries hailed the Saudi initiative. For its part, Egypt also expressed support for Riyadh’s initiative to halt the fighting in Yemen and stressed the need to create the conditions for the resumption of the political process that would lead to a comprehensive political solution. The UAE, Bahrain, Kuwait, the Arab League and the Gulf Cooperation Council have all joined Egypt in welcoming the Saudi initiative.

Commenting on the wide support for the Saudi initiative, Hussein Haridi, Egypt's former assistant foreign minister, explained that the Arab and international community, most notably Egypt, seek to put an end to the war in Yemen after the humanitarian crisis reached catastrophic levels. He told Al-Monitor it is a good initiative that aims to end the war, and the international community has become certain that the Yemeni situation will not be solved militarily.

The international community has also shown support for the initiative. “We call on all parties to commit seriously to a cease-fire immediately and engage in negotiations under the auspices of the UN,” Principal Deputy Spokesperson at the US Department of State Jalina Porter said.

British Foreign Secretary Dominic Raab also welcomed the Saudi plan to end the war in Yemen in a tweet on March 22.

Haridi said there are two reasons behind the timing of the initiative. The first is that the new US administration is committed to ending the war in Yemen. The Biden administration had earlier expressed its commitment to end the Yemeni war and appointed a special envoy for Yemen. The United States also halted arms sales to Riyadh to prevent their use in the Yemeni conflict.

Second, Haridi added, is Riyadh’s desire to also put an end to the war in Yemen.

Meanwhile, the Houthis were quick to reject the initiative. The Houthis' chief negotiator, Mohammed Abdul-Salam, tweeted that “this initiative is just for media show, is unserious and provides nothing new. Any initiative or formula that does recognize that Yemen has been a victim of aggression and siege so more than six years offers us nothing new.”

The Houthis believe it is the right of the Yemeni people to see the opening of the Sanaa airport and the seaport of Hodeidah, and that the Saudi naval and air blockade on Yemen is the main reason behind the country’s deteriorating conditions.

Commenting on the reasons behind the Houthis' rejection, Haridi said a proxy war is taking place between Riyadh and Tehran in Yemen and the Houthis lack independent decision-making. It all depends on the future of US-Iranian relations, he said, adding that Iran’s destabilizing role involves using the Houthis and Shiite militias in different parts of the world as a pressure card to negotiate with Washington, either on its nuclear activities or its destabilizing activities in the region.

Salah Halima, deputy chairman of the Egyptian Council for African Affairs, told Al-Monitor that Riyadh’s initiative is a positive, constructive and worthy of support initiative that would involve all political parties in a political process to end the armed conflict in Yemen. That would lead to a transitional period of power and wealth sharing in light of Yemen’s territorial integrity, so as to end foreign interventions and terrorist groups in Yemen, he added.

He added that the regional and international support for the initiative, especially from the UN, Arab countries, the EU and the US administration, pressures the Houthis to consent. Yet the Houthis' position is correlated with the position of Iran, which may push them to take their time and may use them as a pressure card to achieve a breakthrough in the nuclear and foreign relations files, namely with the Gulf states, the US administration and the EU, Halima stated.

“The initiative’s timing, however, shows a strong Saudi desire to bring about security and stability and end the Yemeni people’s suffering. Subsequently, this initiative needs to be supported. The crisis cannot be resolved militarily, and the other side needs to show good intent and consent to the cease-fire, which would allow the political process to begin. Both conflicting parties need to make concessions by showing a sincere desire for security and stability and a successful political process, and that can be done in the negotiation process," Halima concluded.