Egypt has raised concerns about a Libyan plan to integrate militias into its military establishment after unification, arguing that doing so could undermine security and stability in both countries. 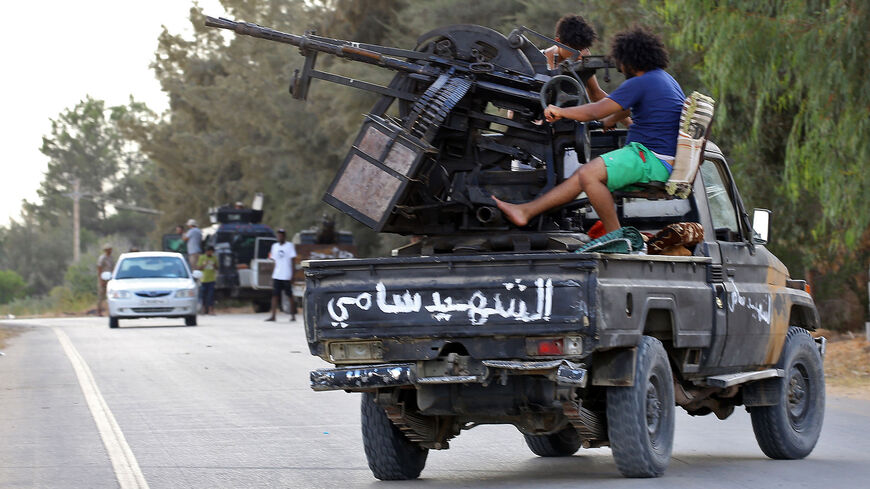 Libyan militants loyal to the Government of National Accord, Libya's internationally recognized government, keep watch from a position south of the Libyan capital Tripoli on Sept. 25, 2018. - MAHMUD TURKIA/AFP via Getty Images

Egypt has renewed its support for the Libyan National Army. LNA commander Khalifa Hifter went to Cairo March 16 and met with Egyptian officials to update Cairo on the latest developments in the talks of the Libyan Joint Military Commission to unify the Libyan military establishment and remove mercenaries.

Hifter also shared plans to integrate armed groups and militias into the Libyan military institution following its unification, which began March 24 with the dismantling of the militias and selecting figures from them to join the military establishment.

During the Security Council meeting, UN envoy to Libya Jan Kubis said that the new Libyan unity government is determined to see the Joint Military Commission unify the Libyan military and security institutions, disarm and demobilize the different armed groups and militias, reintegrate them in the military establishment and reform the security establishment, which is of paramount importance for the stability of Libya and that of the Sahel region.

The Joint Military Commission, which includes 10 representatives from the military leadership of the LNA and of the Tripoli-based Government of National Accord (GNA), emerged from the Berlin conference on the Libyan crisis in January 2020.

The plan to integrate members into the Libyan military institution upon the dismantling and disarming of the militias that were involved in the conflict has raised concerns in Egypt and the LNA.

Libyan parliament member Ali al-Saeedi said during a March 26 session, “Egypt and the LNA fear the integration of members of extremist militias or those who remain loyal to Turkey or Qatar.”

Saeedi added, “The members of the Joint Military Commission are aware of such concerns. The commission is made up of military experts who understand how difficult these terrorist and non-national members are to integrate into the Libyan army after its unification — as this is important to preserve a sense of nationalism of the Libyan military institution.”

He went on, “The LNA will not agree to incorporate any militia member with a history of terror crimes or known to be loyal to a country other than Libya. The Muslim Brotherhood has been spreading rumors that Egypt has given up on Field Marshal Khalifa Hifter, which is not true. In fact, Commander Hifter has been in constant contact with Egypt regarding Arab and national security, whether in Libya or Egypt.”

Saeedi stressed, “Egypt is determined to preserve Libya’s stability and consolidate its security and military institutions, as Egyptian President Abdel Fattah al-Sisi confirmed during his meeting with Mohamed Younes al-Menfi, the chairman of the Libyan Presidential Council.”

During a March 25 meeting with Menfi in Cairo, Sisi said that his country “was ready to provide its expertise to the Libyan government in various fields in order to restore the national institutions of the Libyan state, especially the military and security establishments, which are necessary for achieving security and stability in the country.”

In September 2020, delegations representing the LNA and the GNA convened in the Egyptian governorate of Hurghada to discuss maintaining the cease-fire meant to end hostilities between the two parties in Tripoli as well as plans to unify the military institutions and dismantle the militias.

Ahmad al-Awadi, a member of the Egyptian parliamentary committee on defense and national security, told Al-Monitor, “Cairo categorically rejects [the presence] of militias and mercenaries in Libya to preserve its own national security and that of Libya.”

He went on, “Egypt supports the LNA because it is a national institution, which is why integrating militias in it would detract from the army's national identity.” He explained, “Cairo is aware of the difficulty of integrating militia members … because these militias only know how to sow chaos and wage street wars.”

Awadi said, “The Egyptian side and the LNA are currently discussing specific conditions for the militia members to be integrated in the Libyan military institution after its unification. One of these conditions is that these members should be loyal to Libya and not to Turkey or any other country.”

He stressed, “Militias in Libya are a weapon used by the Muslim Brotherhood and Turkey, which is why Cairo will not accept the integration of any member of these groups in a Libyan national institution such as the army."

Brig. Khaled al-Mahjoub, the head of the Moral Guidance Department of the LNA, told Al-Monitor, “It is only natural for Cairo to offer support to the LNA and its commander, Hifter.”

“The Muslim Brotherhood’s control of Libya [via Turkey] poses a threat to both Egypt and Libya's national security. This is why Egypt is supporting the LNA, which is the Brotherhood’s number-one enemy in Libya,” he added.

He argued, “The international community agrees on the need to dismantle the militias and remove mercenaries from Libyan territories … through the Joint Military Commission.”

Commenting on the integration plan, Mahjoub said, “According to the terms of the Joint Military Commission agreement, armed militias must be dismantled, as they are groups that include criminal gangs that cannot be integrated. There are also some terrorist groups that uphold certain fundamentalist and extremist ideologies and beliefs and are known for their loyalty to other countries. It is impossible to integrate them in the military establishment.”

Mahjoub explained, “There are conditions under which young people from these groups may be integrated. Members of such groups must not have criminal records, including terror crimes or anything of that sort. Those who show a sense of patriotism and [and whose] loyalty lies in Libya first and foremost will be considered for integration.”