A recent decision to nullify a parliamentary vote and ongoing targeting of opposition lawmakers are further evidence of Turkey’s slide away from a democratic system. 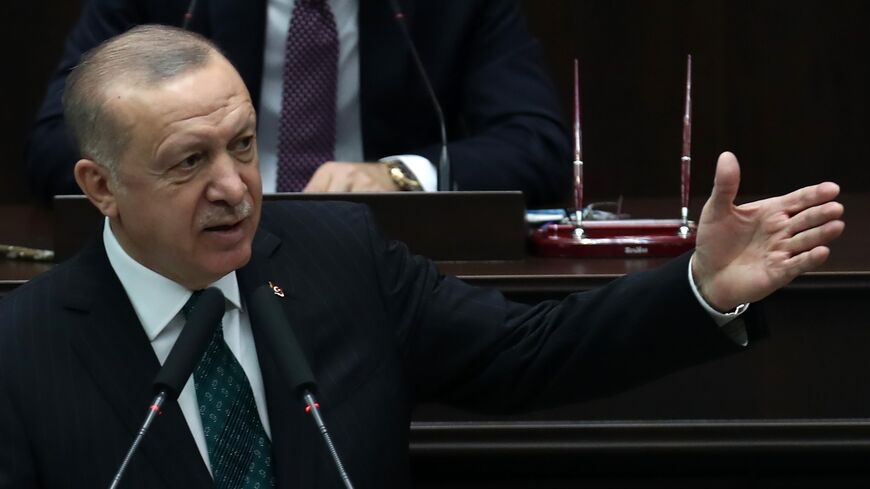 Turkish President Recep Tayyip Erdogan speaks during his Justice and Development Party's meeting at the Turkish parliament in Ankara on Feb. 10, 2021. - ADEM ALTAN/AFP via Getty Images

A recent move by Turkey’s ruling party to override opposition in parliament, alongside an ongoing crackdown on dissent more broadly, has cast doubt on the path of Turkish democracy.

Since the Gezi Park protests in 2013, optimists have seen Turkish President Recep Tayyip Erdogan’s increasing authoritarianism as part of a "transition period" or "dormant" democracy that could be awakened at any time. These hopeful perceptions form the basis of arguments that Erdogan’s days in office are numbered and that his story and era are almost over.

This, however, is wishful thinking. The reality is that Turkey has transitioned out of being a regime on the brink of authoritarianism into a fully authoritarian one.

In 2015, Erdogan’s Justice and Development Party (AKP) could not achieve a parliamentary majority in June elections. As Fiona Hill, who served on President Donald Trump's National Security Council, explains, Erdogan forced a “re-run election” for November and used the time in between to even further marginalize the opposition and silence its voices. Erdogan then was able to reverse the results of an election that did not please the AKP.

In July 2018, Turkey switched from a parliamentary to a presidential system. Under the new setup, the powers of the parliament were decimated. Several events since show how obsolete the institution has become.

On March 31, by sheer luck, the opposition managed to win a majority in a parliamentary vote — as AKP and Nationalist Movement Party (MHP) legislators were not in attendance in full force — and rejected a bill. This was the first time under the new system that opposition parties' votes determined the result. Although the parliament's bylaws state that if a bill is rejected it cannot be brought back to the floor for a year, the AKP cited a technical error the next day, nullified the vote, and held a new vote on the bill on April 6. The passage of the “security bill and archive research law proposal” that day shows that parliamentary bylaws do not matter if they do not please those in power.

The parliament has just become a place where opposition party members can use their positions to share incidents of corruption and violations of civil liberties. Since most opposition members do not have access to media outlets, they record and post their speeches on social media. Hundreds of lawmakers are under investigation or in jail. The former co-chairs of the pro-Kurdish Peoples' Democratic Party (HDP), Selahattin Demirtas and Figen Yuksekdag, have been imprisoned since November 2016.

On April 2, Omer Faruk Gergerlioglu, an HDP lawmaker, was brutally taken into custody from his home. His criticism of the government had a wide reach, including to conservative, secular, liberal and Kurdish groups. He was expelled from parliament last month after a court upheld his conviction involving a social media post accused of being terrorist propaganda.

Several opposition party lawmakers have been physically attacked by mobs in public after speaking out against the government.

To make matters worse, the AKP and MHP de facto coalition has been determined to shut down the HDP. The haphazardly prepared bid has been rejected for now, but the effort is far from over. On April 7, new investigation requests were brought to the parliament against 11 HDP lawmakers. Riza Turmen, a former judge of the European Court of Human Rights and a CHP lawmaker, writes that the proposal to end the HDP's existence “tells us that politics is a matter reserved for the government and its allies.” Turmen said there is no longer any room for political activity unless it is pre-approved by the government.

After 104 retired admirals posted a statement criticizing the government, 10 were taken into custody and more investigations are expected. Various parties expressed their anger or criticism toward the signatories. Erdogan and the media have framed the statement as a potential coup threat organized by Kemal Kilicdaroglu, the CHP leader. Erdogan said, “Admirals are CHP members” and “their spokesperson is Kilicdaroglu.”

This is part of a continuing trend where those who dissent are treated as if they were security threats to the nation. A senior AKP bureaucrat who spoke on the condition of anonymity told Al-Monitor, “You have to applaud Erdogan. On the one hand, he is eliminating the HDP. They are all branded as terrorists. But now the CHP will be slowly dissolved as their members will one by one be labeled as coup supporters, or traitors.”

Municipal powers are also being manipulated by the federal government. In 2019, opposition parties won major victories in municipal elections. In Istanbul, Erdogan engineered a mind-boggling and arbitrary re-run election in the mayor's race in hopes that his candidate would win the second time around. However, the re-run wound up being a devastating defeat for the AKP. But although the opposition won the mayor's race, the AKP and the MHP already had achieved a majority on the Istanbul city council. After the electoral loss, Erdogan gradually decreased local governments’ powers and financial reach. Most HDP mayors have been replaced by government trustees, effectively disenfranchising millions of voters.

Another blow to opposition mayors took place in March when Ankara decided that city councils will make the final decisions on naming the managerial officials who work with the mayors. Despite opposition protests at such repeated usurpations of power, the AKP gets its way each time.

While Erdogan's public support has decreased significantly, his political grip has tightened.

There are three reasons why it is crucial to diagnose the current Turkish political system accurately.

First, describing Turkey’s political system as competitive or electoral authoritarianism, or illiberal democracy with heavy Islamist overtones, gives false hope to the opposition that if only if it works harder, it can win the next elections. Understanding that Turkey has now entered a full-blown authoritarianism will help the opposition find new ways to combat arbitrary political setups.

Third, access to the political domain will be increasingly limited in Turkey’s near future. In authoritarian systems, satellite parties run in the orbit of the incumbent. Periodically, they might ally themselves with the incumbent to generate patronage for their own members and to survive. Authoritarian regimes do not become democratic overnight, and the sooner this reality is accepted, the sooner solutions can be found for dealing with the suffocating Turkish political environment.