Secretary of State Antony Blinken also said that President Joe Biden's recent recognition of the Armenian genocide should not have come as a surprise. 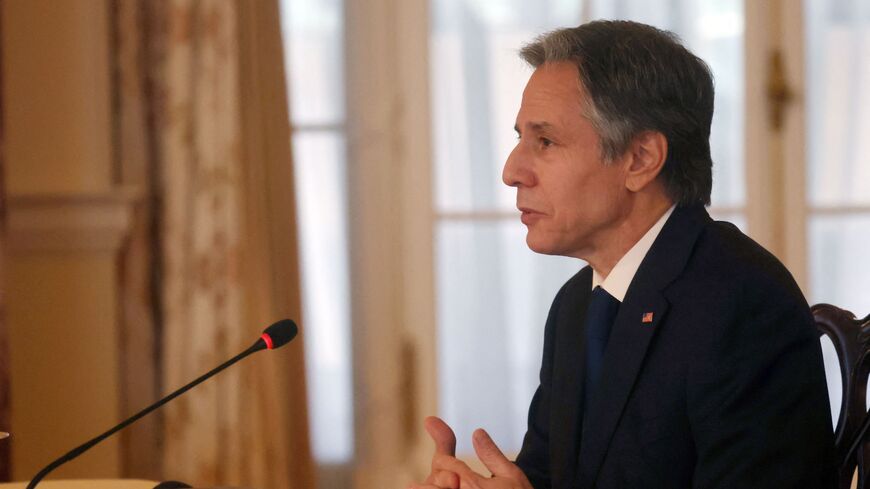 US Secretary of State Antony Blinken participates in a virtual bilateral meeting with Nigeria's President Muhammadu Buhari during a videoconference at the State Department in Washington on April 27, 2021. - LEAH MILLIS/POOL/AFP via Getty Images

Secretary of State Antony Blinken said Wednesday that Turkey shouldn’t make any additional purchases of Russian weaponry, warning that doing so could provoke further US sanctions.

"It's also very important going forward that Turkey, and for that matter all US allies and partners, avoid future purchases of Russian weaponry, including additional S-400s," Blinken said during a virtual briefing at Washington's Foreign Press Center.

Turkey acquired the multimillion dollar S-400 missile defense system from Russia in 2019, which the United States says poses a threat to NATO’s air defense capabilities and may compromise the security of its own F-35 stealth fighter jets.

The Donald Trump administration booted Turkey from the F-35 program and in December 2020 imposed limited sanctions on Turkey’s defense industry under the Countering America’s Adversaries Through Sanctions Act (CAATSA).

"Any significant transactions with Russian defense entities, again, could be subject to the law, to CAATSA, and that's separate from and in addition to the sanctions that have already been imposed," Blinken said.

During his Brussels meeting with Turkish Foreign Minister Mevlut Cavusoglu in March, Blinken urged Turkey not to retain the S-400s, which Cavusoglu described as “a done deal.”

Relations between the two NATO allies are frayed over a number of issues, including the S-400s and Turkey’s human rights record. On April 24, President Joe Biden became the first US president to declare that the World War I-era mass killings of Armenians in modern-day Turkey constituted a genocide, in a widely expected move that infuriated Ankara.

“President Biden expressed views that he has held for many, many years,” Blinken said, adding that human rights are central to the administration’s foreign policy, part of which involves “an acknowledgement of past atrocities precisely in order to prevent their recurrence.”

Blinken on Wednesday called Turkey “a critical ally to the United States and NATO.” During his January confirmation hearing, he raised eyebrows by referring to Turkey as a “so-called strategic partner” over its dealings with Russia.