In a meeting on the sidelines of a NATO ministerial meeting in Brussels, the US secretary of state and Turkish foreign minister discussed a range of issues. 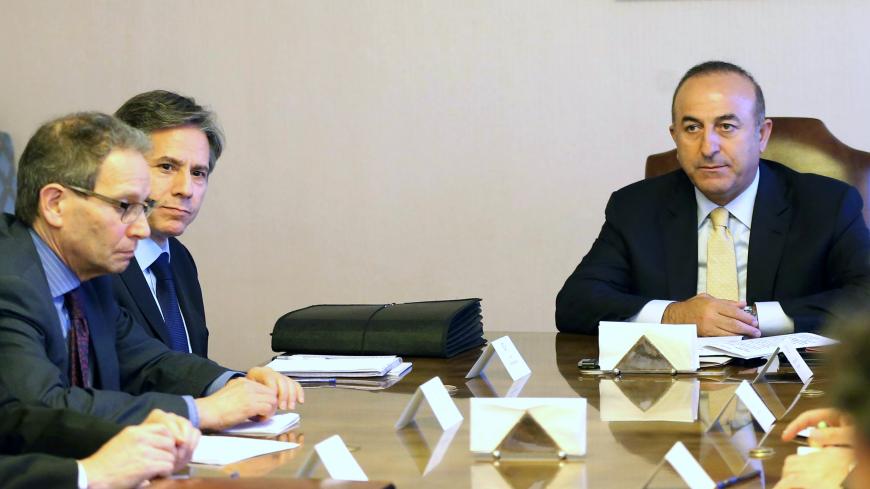 US Secretary of State Antony Blinken has renewed calls for Turkey to ditch Russia’s S-400 missile defense system in his first face-to-face meeting with his Turkish counterpart, Mevlut Cavusoglu, on the sidelines of a NATO ministerial meeting in Brussels today.

“Secretary Blinken urged Turkey to not retain the Russian S-400 air defense system,” the State Department said in a statement. Blinken also warned Cavusoglu of the likely consequences of Turkey getting a second batch of S-400s and Sukhoi S-57 and S-35 war planes — namely a second wave of sanctions from the Hill, diplomatic sources told Al-Monitor.

The NATO allies have been at loggerheads over Turkey’s acquisition of the S-400s despite repeated warnings from Washington over the likely consequences. On Dec. 14, 2020, Turkey’s state defense procurement agency was sanctioned under the Countering America’s Adversaries Through Sanctions Act (CAATSA).

Turkey has not bowed to US pressure and there were no signs of a change in Ankara’s position following today’s bilateral meeting. Briefing reporters after the talks, Cavusoglu said that Turkey had “already bought” the system, that it was “a done deal.” Turkey had repeated its offer, though, to set up a commission with the United States to “clarify technical issues.”

The idea is to establish a mechanism whereby Turkey is able to assure the United States and NATO that the system will pose no threat to the alliance’s assets including F-35 fighter jets. But Washington has shot the idea down, saying the missiles have to be relinquished outright and that with the slapping on of CAATSA sanctions, this condition has been incontrovertibly written into the law. Blinken explained to Cavusoglu that separation of powers in the United States’ democracy makes it impossible for the administration to intervene on Turkey’s behalf, the sources said.

A possible compromise would be for Turkey to permanently mothball the kit. The monitoring would be to ensure it stays that way. Turkey has not displayed any interest in this formula, and the general feeling on the US side was that nothing has changed.

Fears that the F-35 security would be compromised by the Russian missile batteries resulted in Turkey’s ejection in 2019 from the F-35 consortium. Turkey had ordered more than 100 of the aircraft that it can no longer have. Foreign Lobby, a specialist publication monitoring foreign lobbying activities in Washington, reported today that Turkey has hired a former Lockheed Martin executive “as it ramps up its campaign to get back into the F-35 program.”

However, Ankara apparently still believes it can somehow wriggle its way out, the sources told Al-Monitor. It has now turned to Afghanistan peace talks as a possible lever, one of the sources said.

The United States has asked Turkey to host a senior-level intra-Afghan peace meeting to finalize a US- and Qatar-brokered peace agreement between the Afghan government and the Taliban. This would in turn pave the way for the withdrawal of US troops from Afghanistan. Cavusoglu had announced earlier that Turkey would host the gathering in April in Istanbul. He repeated this today, but said that Turkey would “have to meet with all parties to decide on a date.”

Turkey is now looking to push the meeting to May, one of the sources said. The idea ostensibly is to wrest concessions on the S-400’s, to put the kibosh on US President Joe Biden’s rumored plans to acknowledge the 1915 Armenian genocide on its 106th anniversary on April 24, and to strengthen its hand in negotiations over a likely fine on Turkish state-lender Halkbank, which is facing prosecution in a federal court in Manhattan over its central role in a multibillion-dollar Iran-led sanctions busting scheme. “If Turkey is telling the United States, 'I won’t help you with Afghanistan, if you don’t do X or Z,' it’s going to [anger] the Americans even more,” a Western diplomat speaking not for attribution told Al-Monitor.

Turkish officials insisted the tone of today’s meeting had been positive and cordial. Cavusoglu called the meeting “constructive” and said the pair had “exchanged comprehensive views” on Afghanistan, Syria, Iraq, Libya and the eastern Mediterranean, in a tweet.

Blinken tweeted in turn that he looked to “continued cooperation with our NATO ally Turkey on counterterrorism, voiced our support for exploratory talks with Greece, and emphasized the importance of democracy and human rights.”

The latter included airing concern over Turkey's withdrawal last week from the Istanbul Convention on Preventing and Combating Violence Against Women and Domestic Violence, the State Department said.

Gonul Tol, director of the Middle East Institute’s Turkey program said, “The Biden administration seems determined not to allow Erdogan’s onslaught on rights and democracy to get in the way of US-Turkey cooperation in areas of common concern.”

Tol added, “But US efforts might prove difficult in the coming months. Biden is likely to follow through on his promise to recognize the Armenian genocide and Turkey’s Halkbank could face a large fine, threatening a new low in bilateral ties in the months to come.”