The White House readout of the call between the two leaders did not mention the Armenian genocide. 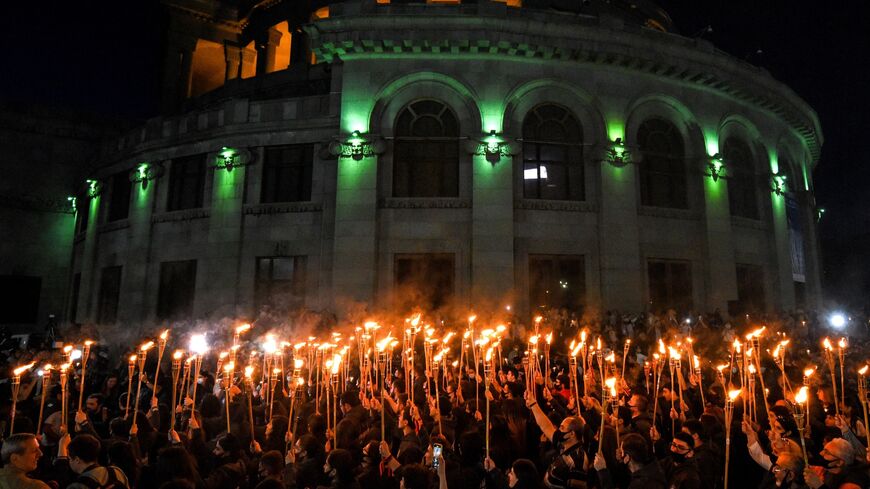 Armenians take part in a torchlight procession in Yerevan late on April 23, 2021, to mark the 106th anniversary of the World War I-era mass killings of more than a million ethnic Armenians as the Ottoman Empire collapsed. - KAREN MINASYAN/AFP via Getty Images

President Joe Biden held a highly anticipated phone call with Turkish President Recep Tayyip Erdogan on Friday, the White House said, a day before the US administration is widely expected to formally recognize the century-old massacre of Armenians in modern-day Turkey as a “genocide.”

Biden conveyed “his interest in a constructive bilateral relationship with expanded areas of cooperation and effective management of disagreements,” the White House said in a statement, adding that the two leaders agreed to hold a bilateral meeting on the sidelines of the NATO summit in June.

The US readout of the call — Biden’s first with Erdogan since he took office in January — comes a day before Armenian Genocide Remembrance Day, but did not mention the issue. Neither did a statement from the Turkish presidency, which said Erdogan and Biden “agreed on the importance of working together to expand cooperation.”

During the 2020 campaign, Biden pledged to be the first American president to support a resolution labeling the mass killing of up to 1.5 million Armenians at the hands of Ottoman forces beginning in 1915 as a “genocide.” Asked about a possible announcement, White House Press Secretary Jen Psaki told reporters on Friday to expect “more in the coming days."

Ankara has long denied that a genocide took place, arguing that Armenians took up arms against their own government and that the number of Armenians who died was closer to 300,000.

A US recognition of the Armenian genocide would deal another blow to relations between the two NATO allies, already strained over Turkey’s purchase of the Russian-made S-400 missile defense system, its actions in northeastern Syria and the country’s deteriorating human rights record. In a statement ahead of Biden’s expected announcement, Erdogan said Thursday that Turkey “will continue to defend truths against the so-called Armenian genocide lie and those who support this slander with political motivations."

In 2019, Congress voted to label the atrocities as a genocide following Turkey’s incursion into Kurdish-held parts of northeast Syria. President Donald Trump rejected the resolution, but described the World War I-era killings as “one of the worst mass atrocities of the 20th century."

Past presidents have stopped short of using the word genocide to describe the massacre, even after campaigning to do so. During the 2008 campaign, Barack Obama pledged to use the term if elected, but failed to deliver on that promise for fear of inflaming tensions with Ankara.