While Moscow realizes that it cannot replace the US role in the region, it’s hoping a cooling of ties between Washington and Riyadh will help bolster its own influence. 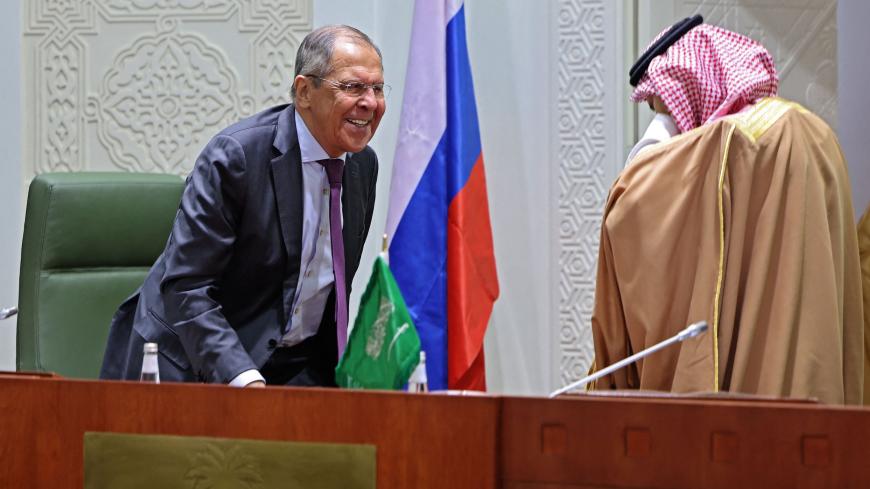 Russian Foreign Minister Sergey Lavrov paid a visit to Saudi Arabia earlier this month as part of his tour of the Gulf countries. Lavrov was received by Crown Prince Mohammed bin Salman on March 10 and met with his Saudi counterpart Faisal bin Farhan Al Saud. Unlike the top Russian diplomat’s meetings in Abu Dhabi and Doha, no major statements came out of his stop in Riyadh, nor were any important initiatives adopted. Yet the importance of this trip should not be underestimated.

Russia is probing sentiments in Saudi Arabia to help Moscow draw conclusions about steps toward rapprochement with the kingdom against the backdrop of a possible cooling in US-Saudi relations. Speculation has grown about a potential weakening of ties between Riyadh and Washington after US intelligence declassified a report Feb. 25 assessing that Saudi Crown Prince Mohammed bin Salman was involved in the assassination of Saudi journalist Jamal Khashoggi. Earlier in February, the White House had said President Joe Biden would conduct diplomacy through Saudi King Salman bin Abdulazizi rather than the crown prince, in contrast to former President Donald Trump. “We’ve made clear from the beginning that we are going to recalibrate our relationship with Saudi Arabia,” White House spokesperson Jen Psaki told reporters.

This shift, along with Washington's decision to lift sanctions the Trump administration had imposed on the Houthis in Yemen, suggests that the Biden administration may not bode well for Saudi Arabia and its rulers.

The State Department has issued a number of statements on how relations with Riyadh will develop since the declassification of the report. In a March 1 briefing, State Department spokesperson Ned Price spoke about visa restrictions on 76 Saudi individuals — part of the so-called “Khashoggi ban” — and said that human rights abuses such as jailing women’s rights activists “undermine our ties.” While Price stressed the US-Saudi relationship is important, he said “Saudi actions will determine” what the two countries can achieve together going forward.

It looks like bin Salman will have to abandon the Rapid Reaction Force — sanctioned by the United States for its involvement in Khashoggi's murder — as it has functioned to date. It is also likely that the Saudi leadership will need to punish higher ranking officials for their role in the killing. However, doing so does not guarantee Riyadh won’t face US calls for liberalization of the political system. Restrictions on the supply of US weapons to the Saudi military also cannot be ruled out.

Thus Moscow believes Saudi Arabia will take steps to diversify its external relations. It is possible that it will try to intensify contacts with Russia to compensate for costs arising from the stagnation of relations between Riyadh and Washington. Russia is already demonstrating its readiness to meet Saudi Arabia halfway.

Diplomacy between Moscow and Riyadh has already intensified. In addition to Lavrov's visit to Riyadh, the Russian president's special envoy to Syria, Alexander Lavrentyev, paid his own visit to the kingdom a day earlier. During these negotiations, the Russian side spoke in favor of increasing the role of the kingdom in resolving the Syrian crisis. In doing so, Moscow is promoting the regional role of Saudi Arabia, which is competing with Turkey for influence in the Middle East and has ceded influence in Syria to Ankara.

Russia may be useful for Saudi Arabia as a mediator in the Yemeni conflict. Moscow has been able to maintain contacts with all parties to the Yemeni conflict — with the Houthis, with supporters of President Abed Rabbo Mansour Hadi and with the Southern Transitional Council — and will be in demand if a peaceful dialogue can be restored. Moscow's line in Yemeni affairs could, in a sense, balance the course of Washington, which is also likely to be more active in resolving the Yemeni crisis. The involvement of Russia in this process would create wider room for maneuvering for Saudi Arabia, since Riyadh fears that the United States does not recognize the security concerns the Saudis give as justification for the war in Yemen.

Moscow will try to revive its initiative from two years ago involving the formation of a new security architecture in the Persian Gulf region and possibly in the Middle East as a whole. It was supposed to work out a certain scheme of interaction of regional players, marketed as a Middle East version of the Organization for Security and Cooperation in Europe. Russia’s initiative could help regulate relations between the monarchies of the Gulf and Iran. Although this plan has little chance of ever being implemented, Russia's consultations with both Saudi Arabia and Iran could play a role in normalizing relations between Riyadh and Tehran and reaffirm Moscow’s importance as an important arbiter for the states of the Middle East.

Russia also expects that the cooling of US-Saudi military ties will mean new contracts for Moscow to supply weapons to Saudi Arabia.

In the fall of 2017, following King Salman’s visit to Moscow, several documents were signed for military-technical cooperation. The documents included a memorandum on the purchase and localization of production of TOS-1A Solntsepyok flamethrower systems, Kornet-EM anti-tank missile systems and AGS-30 grenade launchers. Most of these agreements have been implemented. Nevertheless, Moscow failed to promote high-tech and expensive weapons such as the S-400 anti-aircraft missile system, aircraft or armored vehicles on the Saudi market.

The types of weapons that Riyadh would like to acquire — Iskander operational-tactical missiles, for example — Moscow cannot supply to the Gulf states because of agreements with Israel. However, in the future these restrictions may be revised. Saudi Arabia's difficulties in accessing American military equipment may open up new opportunities for Russia to supply weapons, for example T-90MSK tanks, Mi-17/171Sh helicopters and Tor-M2 and Buk-M3 short- and medium-range anti-aircraft missile systems.

Moscow would also like to increase general trade between the two states, bringing the trade volume to $5 billion by 2024. So far, that volume barely exceeds $1.5 billion, though some progress has been observed in this direction. In 2020, Russia began exporting wheat to Saudi Arabia. The kingdom was already one of the largest importers of Russian barley.

Also, Russia and Saudi Arabia are looking to strengthen cooperation in the world oil market and "do not note any reasons that could undermine the interest in their cooperation within OPEC+,” according to Lavrov, speaking at a joint press conference in Riyadh following talks with his Saudi counterpart.

“We have confirmed today our focus on strengthening our cooperation in the global hydrocarbon markets. At this stage, we do not see any events that, if implemented, will undermine the interest in our mutual cooperation. This is an objective reality and it has a long-term, stable character, in my opinion,” he added.

Despite efforts to find areas where Russia could play a greater role in the event of cooling Saudi-American relations, Moscow realizes it won’t be able to replace Washington as a strategic partner for Riyadh anytime soon. Nevertheless, Russia is ready to take advantage of the current situation to gradually boost Russian-Saudi ties and strengthen its tactical positions, with an eye to their gradual transformation into strategic ones.