Although there are political tensions on human rights issues, the US-Saudi relationship could be vital for the United States to address Russian and Chinese influence in the Middle East region. 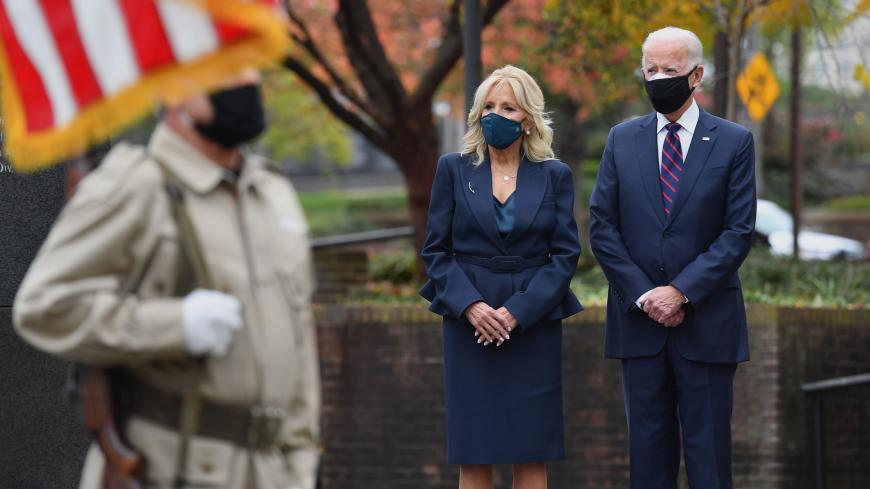 US President-elect Joe Biden and his wife, Jill, pay their respects during a Veterans Day stop at the Korean War Memorial Park in Philadelphia, Pennsylvania, on Nov. 11, 2020. The leaders of close US allies, including Saudi Arabia, have called Biden to offer their congratulations. - ANGELA WEISS/AFP via Getty Images

President-elect Joe Biden pledged during his campaign to make Saudi Arabia’ leaders the "pariah that they are" and to demand accountability over the October 2018 murder of Washington Post contributor Jamal Khashoggi, which, according to the CIA, was ordered by Saudi Arabia’s Crown Prince Mohammed bin Salman, also known by his acronym MBS.

Still, many Saudis give little importance to such statements. “Even my father, who is in his late 70s, once told me this is 'election talk,'” said Eyad Alrefai, a Saudi doctoral candidate in politics and international relations at Lancaster University.

The Saudi leadership waited more than 24 hours to congratulate Biden after the election was called for him, unlike other Gulf officials, and some analysts said the delay could be interpreted as a political signal. “Saudis are sensitive that Biden used strong words directly against MBS and the king, so while they want to mend they want to do so while preserving face and pride,” Cinzia Bianco, a fellow at the European Council on Foreign Relations, told Al-Monitor.

At the time of publication, President Donald Trump had not yet conceded defeat.

The crown prince has cultivated close personal ties with Trump and his son-in-law Jared Kushner, who did not take the kingdom to task for some aggressive policies. In 2017, Saudi Arabia, the United Arab Emirates, Bahrain and Egypt imposed an embargo on Qatar, including closing down air and land travel, accusing the emirate of backing Islamist radicals and Iran. Doha denied the charges.

According to American journalist Bob Woodward’s book "Rage," Trump also protected the crown prince after the killing of Khashoggi and said, “I saved his ass.”

“We do feel … comfortable with the Republicans because we share the same values of being conservative and preserving our identity,” Saudi political analyst Ahmed Alibrahim told Al-Monitor. He acknowledged the importance of human rights but called on Western leaders and the US administration to “let people live the way they want to live.”

“Election talk is not something that we take seriously as Saudis because if we dig deeper than the public face of the US-Saudi relationship, it has always been a frank and honest conversation. I do not see that to change drastically with a president,” Prince Talal Al Faisal, CEO of the Jeddah-based Al Takamul Group, told Al-Monitor.

Washington remains a strategic, military, economic, financial and technological partner for the Gulf region. The United States and Saudi Arabia established diplomatic relations in 1933, and today the kingdom is the largest US export market in the Middle East.

For Amal Altwaijri, a Saudi candidate for a master's degree at the Johns Hopkins School of Advanced Studies, renewable energy is a field where economic cooperation with a Biden administration could be successful as the kingdom plans to lay the groundwork for a post-oil era.

Yet she told Al-Monitor that some of Biden’s statements were "unrealistic," saying, “It made me feel like the issue of Saudi Arabia is just being used for the case of the campaign.”

During his campaign, the Democratic presidential nominee also pledged to reenter, under certain conditions, the 2015 Iran nuclear deal, which Trump withdrew from in 2018, and to use "hard-nosed diplomacy to push back against Iran’s destabilizing activities."

Abdullah Bin Khaled Al Saud, an assistant professor at Naif Arab University for Security Sciences, told Al-Monitor that Saudi Arabia would push for an agreement with Iran, too, on the condition that Iran’s drones and ballistic missile programs and what he called Iranian interference and malign activities in the region be addressed.

“If Joe Biden sends the message that he is willing to accommodate Iran, that is gonna send negative signals to the Saudi leadership,” Al Saud added. Still, Biden's ability to act could be limited by the Senate, which plays a major role in US foreign policy and could restrict a rapprochement with Iran or the end of US support of a Saudi-led war in Yemen.

Alrefai said he has the feeling that the US-Saudi relationship has been deteriorating “years after years” since he touched down in America in 2012, even though the kingdom carried out social changes the United States pressured the kingdom to implement. “The 9/11 generation runs America, and they hold a grudge against us,” Alrefai added.

Trump said during his 2016 campaign, “Who blew up the World Trade Center? It wasn't the Iraqis, it was Saudi [Arabia]” — 15 of the 19 hijackers who carried out the 9/11 attacks were Saudi citizens. The Saudi government denied any role in the attacks.

Washington’s active support and its security architecture in the Gulf region are still vital to Riyadh. Yet alternative global powers such as China and Russia have emerged in recent years, given more space by the United States' gradual disengagement from the Middle East apparently starting under what has been called President Barack Obama’s "leading from behind" doctrine.

“The official position has always been that Saudi Arabia is committed to the US. But it has options to diversify its economic and security relationship,” said Abdullah Bin Khaled Al Saud. He said he believes the kingdom will remain “a central regional power” for a United States whose objective is to limit Russian and Chinese influence across the region.

At the societal level, however, economic concerns prevail as the Saudi government tripled the value-added tax to 15% in an attempt to contain the impact of the COVID-19 crisis. Al Faisal said, “The relationship between the Saudi population and its leadership, and its popularity, is not determined by a statement made by someone halfway across the world, but by policies and decisions that are implemented and affect Saudis in their everyday life.”