Former Minister Tzipi Livni is the latest in a long list of public figures and celebrities joining the rapidly growing medical cannabis industry in Israel. 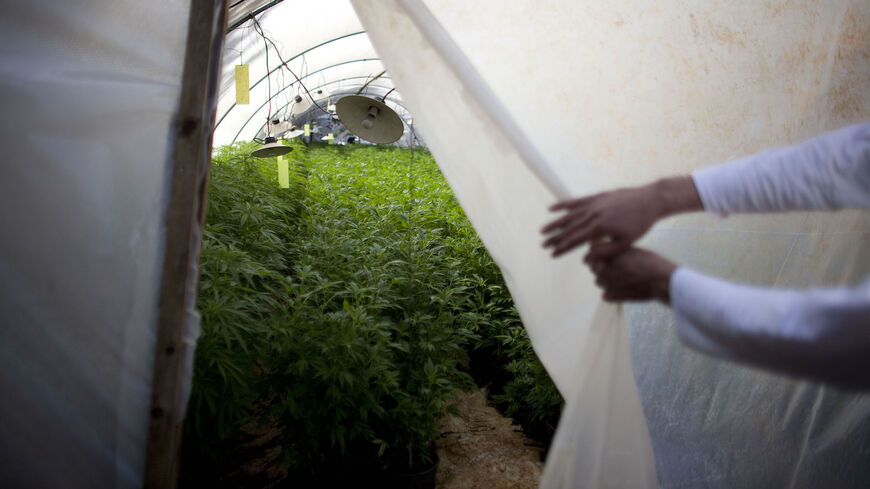 A worker pulls back a plastic sheet at a cannabis greenhouse at a Tikun Olam growing facility on March 7, 2011, near the northern city of Safed, Israel. - Uriel Sinai/Getty Images

The cannabis industry has been gaining unprecedented momentum in Israel. Its supporters already included two former prime ministers, countless generals and a former chief of police, not to mention some of the country’s finest athletes and entertainers. Now they have been joined by Tzipi Livni, a former acting prime minister and minister of foreign affairs. She was courted by multiple parties before the last election, but Livni entered the business world instead.

On March 25, Cantek CEO Netzah Yisrael appointed Livni as a strategic adviser to the company. “The vision of our company is taking shape and the collaboration with Tzipi Livni will lead the firm in realizing its strategy for becoming an international company. Livni is a leader in every way. She possesses a sharp strategic viewpoint that will help navigate Cantek in its next steps."

Over the last year, Cantek invested about 73 million shekels to develop an extensive cannabis network from cultivation, manufacturing of cannabis-based products, marketing and distribution, both in Israel and in Europe. Its “Tree of Knowledge” center also offers consultation services for patients seeking to use medical marijuana. The center helps hundreds of people each month take advantage of their legal right to use medical cannabis.

A subsidiary — Cantek GmbH, based in Hamburg, Germany — is licensed to import, export, manufacture, market and distribute medical cannabis in Europe.

Livni is the most recent addition to the growing list of senior figures in Israel who have thrown their support behind one of today's hottest new commodities. They include former Prime Minister Ehud Barak, now chairman of the board of the medical marijuana company InterCure; former Prime Minister Ehud Olmert (and head of the Public Council for Healthy Lifestyles), who is a business consultant for the medical cannabis firm Univo Pharmaceuticals; former police chief Yohanan Danino, now chairman of the board of Together Pharma, which grows and distributes medical cannabis; former IDF Chief of Staff Dan Halutz, the current chairman of the board of the newly founded CFR cannabis company; Yaakov Peri, the former head of the Shin Bet and a former science minister who now heads the research and development firm CANN-IL; and former air force chief Ido Nehushtan, who serves as chairman of the board of Cannassure Therapeutics.

The medical cannabis industry has attracted some of the wealthiest people in the country as well as leading artists and athletes. Key figures in the field include Leon Koffler, owner of the Superpharm chain of pharmacies, who is also an investor in B.O.L. Pharma Medical Cannabis Products. Leon Recanati, a former owner of the Discount Bank and IDB, is an investor in Intelicanna, while Adam Neumann, founder of WeWork, has invested in Barak’s InterCure.

Popular musician and artist Aviv Geffen served as a marketing consultant for Intelicanna, while Gil Vermouth, a midfielder on Israel’s national football team, owns Way of Life Cannabis (WOLC) with his wife Iris Vermouth. The farm cultivates a variety of medical cannabis strains.

Cantet holds licenses to grow and market medical cannabis in Israel, as required by the Ministry of Health. It also plans to build greenhouses in Kfar Hess and a factory in Even Yehuda. The company also owns the Israeli franchise of the Canadian medical marijuana giant Aurora, which is traded on the New York Stock Exchange and is valued at $1.8 billion.

The reason for this remarkable growth is a 2019 law allowing the exportation of medical marijuana. Israeli research and development of cannabis products for medical use are among the most advanced in the world, and the plant has expanded to treat dozens of symptoms and diseases with various parts at different concentrations.

But as so often happens in Israel, even after legislation is passed, the government takes its time to implement it. It was only in May 2020 that Minister of Economics Eli Cohen signed an order allowing exports, and then with many restrictions.

The ensuing election raised awareness of the issue. Ahead of the September 2019 elections, Prime Minister Benjamin Netanyahu promised Moshe Feiglin, whose party platform included the legalization of cannabis, that he would take steps to overturn bans on possession for personal use and even to open the market for personal use of cannabis.

According to Olmert, “There can be no doubt that holding up permission to export cannabis is a fiasco. The reason that permission was indeed given in 2019 [was that] we were right before an election and the media was flooded with super-encouraging predictions that Moshe Feiglin, who spoke openly about cannabis, could receive massive support. For reasons that have nothing to do with what interests us about cannabis, the government went ahead and approved it. They wanted to take the credit for themselves.”

Some estimates hold that the Israeli economy stands to make hundreds of millions of dollars per year from exporting medical cannabis. However, regulatory delays have already cost Israel potential income. Companies continue to hire public figures including top politicians to advance the issue.

In Israel today, there are more than 10 farms raising cannabis and five factories that meet the standards set by the Ministry of Health. The roughly 65,000 Israelis who are treated with medical cannabis and who use 25 tons of it medicinally per year cannot consume Israel’s productive capacity, and dozens more companies are about to enter the field.

“If there are no exports, the Israeli [cannabis] industry will collapse within a year,” a senior figure in the local cannabis industry anonymously commented to Cannabis Magazine. “The companies are facing enormous debt after tens of millions of shekels were invested in the construction of the most advanced facilities. The problem is that the local market is too small to justify activity at that scale. … We can’t keep waiting. There is no reason to hold up this enormous economic engine.”

It's another job for a stable government, capable of making bold decisions — the kind of government that Israel has been hoping to see elected for the last two years.