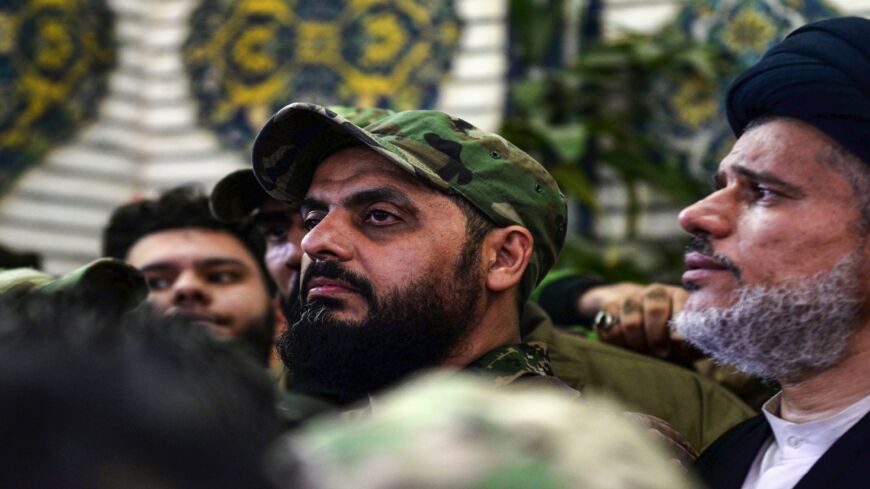 Iraq's intelligence service has warned it will prosecute those leveling baseless accusations against it, tarnishing its reputation and questioning the patriotism of its officers and employees.

The warning from the Iraqi National Intelligence Service (INIS) came in an official statement on March 15, just one day after the head of an Iran-backed faction had accused it of politicization and of being infiltrated by foreign operatives. On March 15, Qais al-Khazali, head of Asaib Ahl al-Haq, accused the INIS of transferring 300 of its members to the Border Ports Authority for political purposes. He also claimed in a tweet that a team of Emiratis had infiltrated the intelligence apparatus and were running it.

Mohammad Ridha al-Haidar, head of the Parliamentary Security and Defense Committee, rushed to deny Khazali’s allegations. In press statements on March 17, he categorically refuted the accusations that an Emirati security team had arrived in the country to manage the intelligence agency. Haidar affirmed he inquired about the matter and found it to be incorrect.

The attacks on the INIS are also largely targeted at Iraqi Prime Minister Mustafa al-Kadhimi, who also serves as head of the INIS.

Khazali had claimed 300 INIS officers were transferred to the Border Ports Authority as part of a plan set by the government to control border crossings that are costing the state’s treasury billions of dollars due to corruption.

Armed factions, including Asaib Ahl al-Haq, are accused of controlling a number of crossings. This could explain why the attack on the intelligence service is being analyzed as aimed to neutralize part of its influence over some crossings.

The border crossings are one of the most prominent sources of funding for armed parties and factions and a continuous subject of dispute among them.

In 2017, clashes broke out between the Al-Sawaed tribe and a faction from the Asaib Ahl al-Haq due to bilateral attempts to control the Sheeb border crossing with Iran.

Khazali's tweet stirred wide controversy in Iraq and prompted independent bloggers to defend the INIS. Those defending it believe that alongside the Counter-Terrorism Service, the agency is one of the most professional and independent services and has been capable of making its decisions separate of any political positions.

Meanwhile, others had a different opinion. They labeled the agency as a tool in the hand of Prime Minister Kadhimi, aimed to fulfill his interests, entrench his power in the Iraqi state and tighten his grip on security institutions.

An officer in the INIS who spoke to Al-Monitor on condition of anonymity said, “We have been tracking a systematic campaign for more than 12 months. This campaign is being organized by political parties and armed groups and aims to undermine the agency and its independence.”

He added, “There is no non-Iraqi team that manages the agency, but we do have work and coordination with many countries, including Iran. We believe these attempts aim to drag the agency into the political bickering cycle and undermine its standing and value. When the reputation of the INIS gets tarnished by a defamation and smear campaign in the media, this means there are efforts to break its symbolism.”

In tandem with this campaign, an INIS officer was assassinated in Baghdad’s Mansour district on March 21. Some linked the assassination to the media and political campaign waged against the agency.

The buzz about the intelligence service first ignited when rumors spread about the transfer of 300 of its members to the border crossings authority by Kadhimi as part of his plan to control it.

Subsequently, Saad al-Khazali, a parliament member for al-Sadiqoun bloc affiliated with Asaib Ahl al-Haq, submitted on March 16 a request to interrogate Kadhimi in parliament. His request remained unanswered by the parliament’s presidency 10 days after its submission.

Al-Monitor repeatedly tried to get a comment from the spokesperson of Asaib Ahl al-Haq’s political bureau in order to understand the movement’s position toward the intelligence agency, but to avail.

Retired Iraqi army Gen. Majid al-Qaisi told Al-Monitor, “The smear and defamation campaign against the Iraqi intelligence service is part of the power struggle. This improper campaign will affect Iraqi national security, because it is targeting the only state agency that can operate inside and outside Iraq and has a responsibility and role in preserving Iraqi national security.”

The factions aligned with the axis of resistance accuse UAE national security adviser Tahnoun bin Zayed Al Nayhan of funding individuals and groups in Iraq to destabilize the situation, through Kadhimi’s close connections. They, however, fail to provide any evidence for their accusation.

Yahya al-Kubaisi, an adviser to the Arab Center for Research and Policy Studies, said the members' transfers that took place quietly at times and explicitly at others provoked the armed factions, which he referred to as “sponsors of the parallel state.”

“This is why we witnessed this organized campaign against Kadhimi,” he said. “This campaign is aimed to protect the parallel state’s arms within the state’s official military and security institutions, including the intelligence service, which will surely be affected by it.”

Meanwhile, some media outlets that could be classified as independent defended the intelligence agency. They accused the Iran-funded Islamic Broadcasting Union of being behind the systematic attack.

Oddly, Iraqi political parties that were not behind the campaign, even those that support the state’s institutions, failed to take a position on the campaign against the INIS. No political party or observer from this camp publicly defended the agency.

Meanwhile, those who were behind this campaign encouraged the media outlets and political observers supporting them to adopt the defamatory rhetoric against the agency.

Those accused of orchestrating this campaign have yet to prove their accusations, and their request to question Kadhimi in parliament lacked seriousness. This is why observers believe this campaign is no more than a political maneuver.