Why has Gulf aid to PA declined in recent years?

Official Palestinian data showed that Saudi support for the Palestinian 2020 budget drastically declined, raising many questions about the future of the Palestinian Authority on the economic and financial levels. 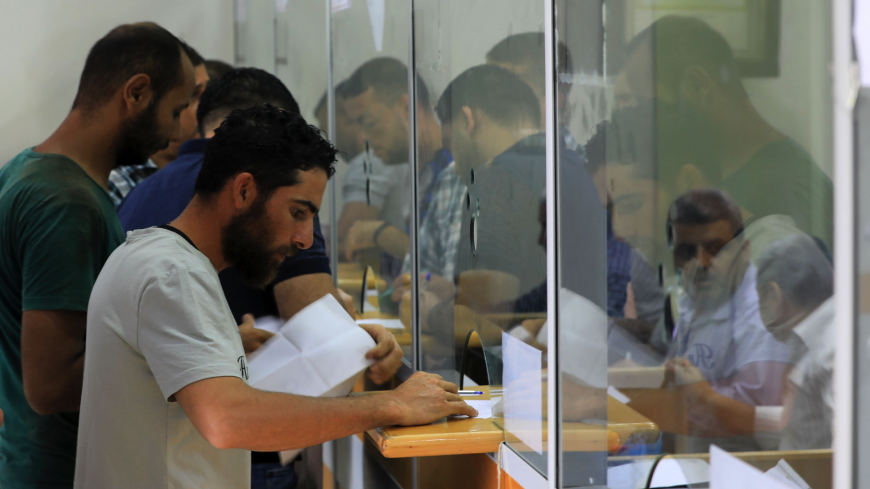 Palestinians receive their financial aid, 100 USD per needy family offered by Qatar, at a post office in Gaza City on June 27, 2020. - MAHMUD HAMS/AFP via Getty Images

The Palestinian Ministry of Finance released March 3 official data relating to the 2020 budget.

The data revealed that Saudi and Arab financial aid sharply declined, with the total Arab aid and grants amounting to $40 million, an 84.9% decrease in comparison with $265.5 million in 2019.

According to the figures, oil-producing countries are the main Arab financiers of the Palestinian budget. The Saudi support declined from $174.7 million in 2019 to $32.5 million in 2020, a decrease of 81.4%. As for the rest of the Arab support, it was divided between Qatar and Oman, with $6.51 million and $1.06 million, respectively.

After the Palestinian Authority (PA) was established in 1994, the international community pledged to provide financial support that amounted to $35.4 billion until late 2017. The European Union was one of the largest donors during this period, with aid amounting to $6.7 billion — i.e., 18.4% — of the total aid provided to the PA, followed by the United States with $5.74 billion, or 15.7%, of the total grants. Saudi Arabia followed with $3.83 billion, or 10.5%. These figures were released by the Palestinian Economic Council for Development and Reconstruction (PECDAR) in February 2019. Most of this aid is earmarked for the Palestinian state budget and used to pay the wages of PA employees, ensure the continuity of the PA, and prevent the collapse of the Palestinian economic and financial situations.

Khabisa added, “All Arab donors provide direct support to the PA through the state budget, except for Qatar, which [also] implements some projects away from the budget. In order for the PA to compensate for the Gulf support’s decline, it must increase taxes, improve tax collection and obtain more clearance funds collected by Israel. While the European Union and the World Bank are the only ones that continue to provide steady aid to the Palestinian budget, the French, Italian, US and German grants sharply decreased.”

Speaking to Al-Monitor on condition of anonymity, an official from the Palestinian Ministry of Finance said, “The PA is going through a deep-seated financial crisis. We contacted a number of Arab countries, particularly the Gulf countries, in order for them to resume and increase their support, because our economic and financial situations have [worsened] and the PA could collapse in case the financial crisis continues. We heard various responses from the Arab countries, some of which expressed willingness to pay but asked us to be patient. Others said they can’t increase aid since they are facing their own difficult economic crises.”

The source refused to name the countries the PA reached out to, probably to keep these contacts secret until they succeed.

The Palestinians have probably pinned hope, albeit little, on the possibility of obtaining support from the Gulf countries and the United States under the Biden administration — although such aid would be either directed to other institutions such as municipalities, which obtain decentralized support as an alternative for the PA budget, or to nongovernmental organizations and the UNRWA.

Jaafar Sadaqa, a Palestinian economist journalist, told Al-Monitor, “There are two main points that could lead to the gradual resumption of Saudi aid to the PA: first the resumption of the Israeli-Palestinian negotiations. Regarding that, the US could give the Arab and Gulf states the green light to resume aid to the Palestinians. Second is the completion of the upcoming legislative and presidential elections. In this case, foreign funds will not be pumped to the Palestinian treasury unless the elections are held — except for the 25 million euros (about $30 million) monthly European contribution to help pay the salaries of PA employees.”

Meanwhile, some Palestinians expect the international community to stop paying the salaries of PA employees and suspend humanitarian projects in the Palestinian territories if Hamas wins the upcoming elections, just like what happened after the movement’s victory in the 2006 legislative elections.

Iran, for its part, does not provide aid to the PA, as Iranian support is limited to the armed Palestinian forces, particularly to Hamas and the Islamic Jihad. The chief of Israel's Mossad, Yossi Cohen, estimated on July 1, 2019, Iranian support at $100 million per year, which Trump's special Mideast envoy, Jason Greenblatt, had confirmed in February 2018.

Mohammed Abu Jayab, editor-in-chief of the Gazan weekly newspaper Al-Eqtesadia, told Al-Monitor, “The Gulf support to the PA, particularly the Saudi one, has witnessed an unprecedented decline in the past three years. While some countries have even ceased such support, such as the UAE, others channeled it away from the PA and directed it to UN and civil organizations operating in Palestine. In 2020, Saudi Arabia announced a generous donation of $150 million to the support program for Jerusalem (carried out by PECDAR) and another of $50 million to the UNRWA. The Saudi aid to the PA amounted to nearly $6.5 billion between 2018-2000, including $250 million for the UNRWA.”